I Am Explorer - the beast in action as duty calls

Info Post
Uma Anandane
September 30, 2013
52 comments
I was always a wandering child in my mind and there was this feeling that was inborn in me that loves to explore the unknown. There had been many childhood incidents that I blissfully recollect now like the black cats groups that we cousins formed and went exploring to the areas we had never visited before just to get lost and to be found. There were also some childhood days that was spend in my great grandma's village - going to thorny woods, fishing in the muddy ponds, cycling on the potholed roads and jumping on the heap of straws just to be caught on the night by our granny when we start to scratch ourselves from head to toe. And today, I am still having the same fire to explore the unknown through my fictional world. I believe having an open mind will help create my own world filled words, images and thoughts at least on my blog.

Exploring the Unknown has always been a part of me and here I am to take you to a journey through a fictitious land at a snap of my finger - a time machine that helps an assignment to be fulfilled by Mr.Stormer, our new agent hired to explore the terrain and to collect valued specimens from Disney characters from different Disney Movies for a special project .

OUR VEHICLE:
A creature of the wild, a powerful beast to be feared and respected , the Tata Safari Storme Explorer Edition  is our chosen vehicle.

EQUIPMENT REQUIRED:
THE JOURNEY :
Mr.Stormer was chosen for an assignment regarding his speciality in studying the creatures that habitats in different terrains in the past using his special Time gadget "Grey Explorer". He chose five different terrains from specific time frame where he ought to visit the creatures and collect their specimen for future study as well as sustainment of the Earth and its species.

Rocky Terrain
Driving in the rocky terrain was not easy especially travelling in the early years of about million years ago where the last species of Dinosaurs had lived. Mr.Stormer had effectively carried his SUV riding a trail with small numerous rocks and carefully plotting a path around the larger rocks with his vehicle's nudge guard with ground clearance of 200mm and electronic "shift-on-fly" feature which engages 4WD for smooth move. His SUV's side impact beams served to hold his car in perfect shape. Halting his car, he created an electric net to protect his SUV from the attack of dinosaur using his multipurpose gadget. After all he needed his SUV.

Slowly padding through the thick jungle he found his subject, an adult dinosaur "Aladar" standing quietly near a Nesting ground, a valley believed to be untouched by the devastation of the asteroid impact. Thanks to his wrist gadget that made his work more simple by peeping and signalling through electric text "Subject found".

It just took few snaps to make his target hallucinated and gathering information about the asteroid crash, the meteorite shower and his life with other multi-species of dinosaur slowly unwinding themselves under the Storme's Canopy Roof which served as a resting place for them. Making sure he collected enough samples from the dinosaur body as well as the terrain, he preserved them in different colored bottles in his cargo storage box. Waving good bye to the sleepy head, he popped onto his time machine for to reach his next subject. 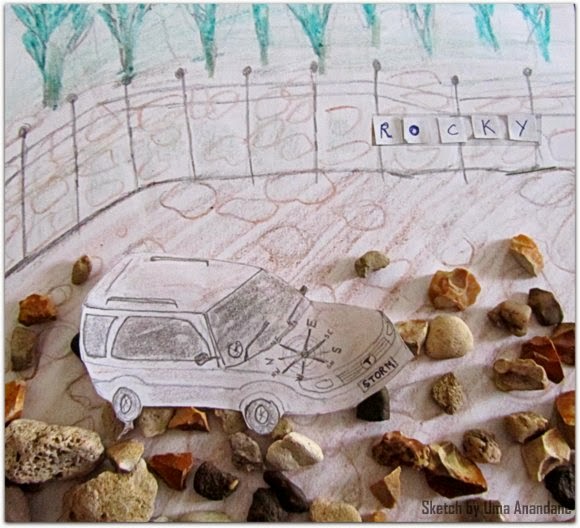 Be it ponds, marshes or swamps, with one touch of the finger tip on Tata Safari Storme's 2 Din touchscreen infotainment system, the vehicle smoothly switched on to travel on the muddy watery terrain.

The place of life, fun and laughter is where Mr.Stormer is ready to hunt and so landed on the time frame of Eeyore's Tail. Winnie the Pooh Bear was full of smiles having won the contest for finding Eeyore's Tail and gulping his honey pot to his stomach full. Seeing Mr.Stormer, he greeted him warmly and asked if he was a passer-by who needs some help.

The help was offered and within an hour the required data samples were collected. And as promised for giving the right information, Mr.Stormer took Winnie the Bear for a ride in the forest. Soon Winnie's friends joined him in the fun bragging all about the forest life, the pits and more. PND navigation system in the car along with the Alphine Music system kept the spark of the adventure live. After having some fun, Mr.Stormer waved goodbye to his friends and swiftly moved on to his next terrain - the snowy mountain. 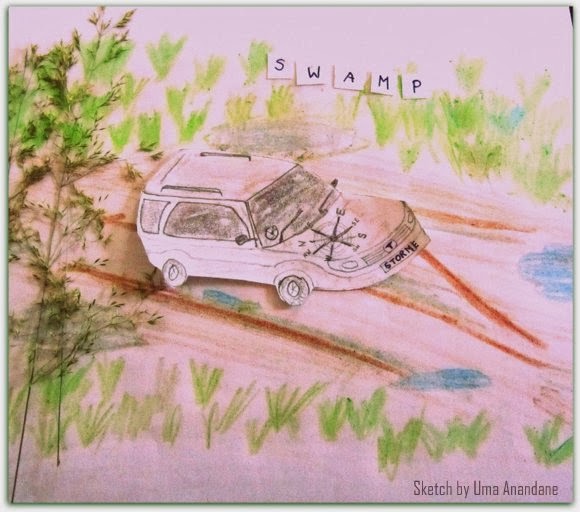 Ice Age was no joke. And travelling in such a terrain was pure challenge. The leather seat cover and the rubber mat of the SUV along with thick jacket helped Mr.Stormer stay warm inside his car. The temperature was in perfect control and thanks to the Fog lamp for extra visibility in his SUV. He expected that in no time the wooly mammoth "Manny" will pass by from what he had researched. And Manny did.

"Ah! you look so fat. Not that I imagine you would be so even after seeing the Ice Age movie " scowled Mr.Stormer.

"Yup! That's what everyone say so. But it is my fur that makes me look big. So poofy!" smiled Manny.

Manny was so friendly that Mr.Stormer found it easy to complete what he needed. Now, time for the next terrain. Yoyo! Grey Explorer to the Desert 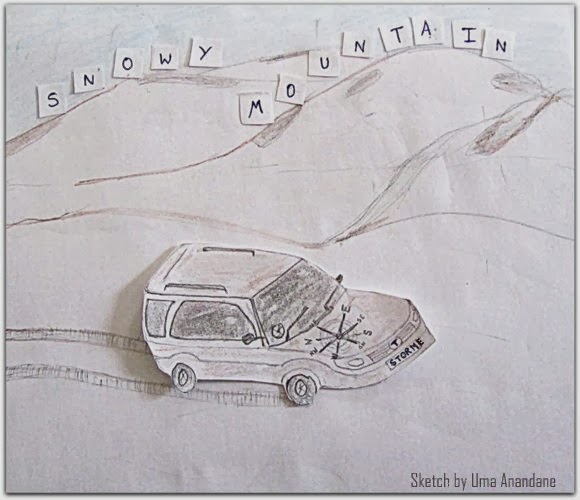 TATA Safari Explorer landed on a terrain where heat and sand prevails from east to west. Riding through the sand demands precision regarding the finesse of the sand with his famous rule of the thumb which is to accelerate sooner and apply brake later than normally done on surfaces with greater traction.

Alas! Lion cub Simba lay tried from exhaustion in the hot sands of the African desert after what had happened to him back home. Mr Stormer carried him safely back to his SUV just before the meerkat and warthhog came. Safari Explorer Storme's Door Visor prevented the heat build up in the car under the hot sun and the Beat the Heat Dual AC served as a savior for them. Using a sipper bottle, Mr Stormer hydrated Simba and cooled him down.

Simba was whimpering his heart out about his dad, the King Mufasa and how guilty he was that he ran away from his home in Pride land under the hallucinating drug given by Mr.Stormer. As Simba was going back to sleep slowing down, Mr.Stormer collected all he needed from him and soon placed him in a safe place in the desert. With the collected terrains sample and his research sheet, he navigated his SUV to his final terrain. 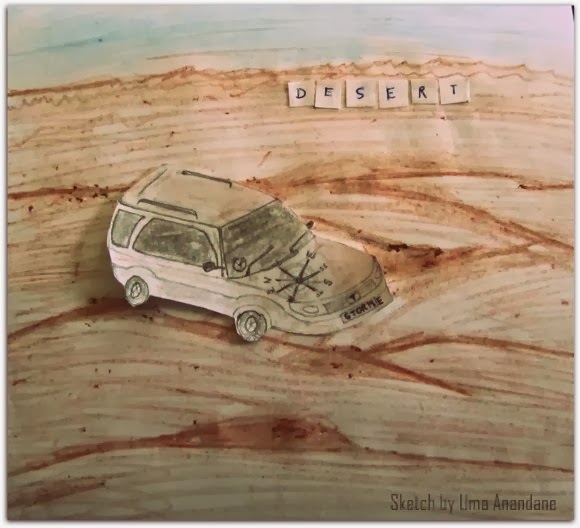 The roads are a mix of wide and zig-zag extending in front as a loop hole and it took Mr.Stormer an adventurer's skill to keep his car steady.

The most important rule of driving up and down the hill is using one's common sense. With turning radius making it easy for sharp turns and with Variable Turbine Technology, Mr.Stormer found driving as a rich experience. But before he could keep his visibility straight, he saw someone moving swiftly before him at full speed. With sudden commotion, Mr.Stormer hit his brake hard. His SUV's Anti-lock Braking System helped to manage the situation by precise wheel rotation as well as preventing the wheels from locking. Before him was a CAR that competed in the World Grand Prix.

Lightning McQueen: Uh, nice to meet you Mr.Stormer. Just heard about your arrival. How would you like to come see the world with me?
Mr. Stormer: Yes, nice to meet you too. If you mean it, then it's a perfect match.
Lightning McQueen: [Impressed] You know, maybe I misjudged you
Mr. Stormer: Well, Most of them do. But still I got a lot to do for experiencing and preserving your terrain.Your help ?
Lightning McQueen: Ah! It's my pleasure. Here you go [ giving Mr.Stormer what he needs ] Now, go on. But keep this in mind. It's official, you're coming to all my races from now .
Mr. Stormer: I sure will ! Fuel the love and the mission begins. 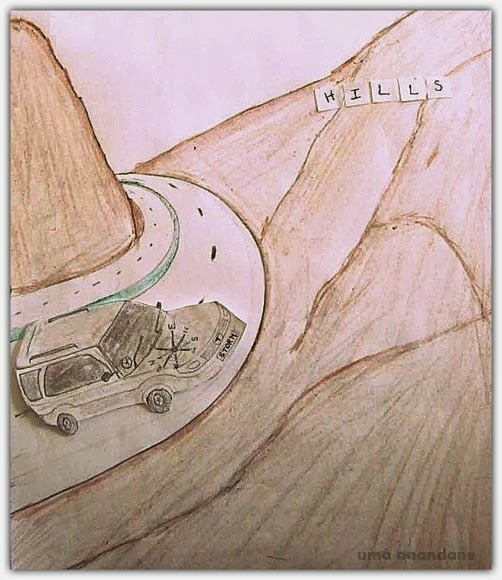 Earth Calls:
The decided plan in terms of route and destination came to a big success - Cheers! Mr.Stormer. Hurray!
Mr.Stormer stood near the research area to see the results of his data collection.

PS : This post was written for Tata Safari Storme Explorer Edition, "I am Explorer!" contest by Tata Safari and Indiblogger

Each journey in the Tata Safari Storme brings with it a different thrill. And each journey calls for meticulous planning of the equipment required. Find a host of accessories crafted for many such adventures!
I AM EXPLORER !

Update: This post has won the grand prize in the Tata Safari - Indiblogger contest.