July 25, 2006 - Mumbai
The morning Mumbai showers welcomed the students to school as it usually would do on the month of July.The school was in its best look of socializing with each one buzzing around with their friends .They talked about the ongoing IPL match, the skipped morning breakfast and the traffic jam by the office goers cars , public and private bus ,etc that became a part of their life in the Monsoon seasons  .

The students noise suddenly stopped as soon as professor Gunalan entered the classroom.He is one professor that the students respect so much for his conducting nature with others.His teaching too different.Unlike other professors he teaches his student asking them more questions and debating along with them.This day was no different .He was teaching about the means of transport his students.

Prof.Gunalan : Dear students, we know that there are many means of transport and the most common use of transport is the Road transport .It can be done by a car,a lorry,a bus ,a bike or a scooter. Occasionally we can see few cycles and walk by foot here and there.Now , can anyone tell me what type of road transport you use to come to school? . Raj ,you start first .

RAJ: Sir, my dad uses his car to pick and drop me at school .Sometimes I use the public transport when he is not available.

Prof.Gunalan : Good.Can you tell me how does your car or the public bus run?

RAJ: They run because of the Diesel in the bus and the Petrol in the car , sir .

Prof:Gunalan: Yes , obviously but sometimes we even use diesel car which is economical. I use one too.

Hearing this the class roared.For many of the students , this is news .Prof.Guna hearing the roar continued,"

Okay , now here is my question to the whole class.Your assignment for tomorrow will be on the topic which is better petrol or diesel ?.Now I need you to form into two groups ,one supporting the petrol and the other diesel.

As usual Raj rival Sam opted for Petrol getting his supporters to vote on his favour.Raj took to debate defending the Diesel.As he was forming a group with is supporters on his new assignment , he noticed Sam smiling whimsically at him.After a short discussion between themselves , the students were ready packing to get back home.

On the other hand ,Raj's father Kumar and Sam's father Hari are very good friends.Whenever they get to meet each other at the school ,they never forget to wish each other good day .Although they noticed that their children are never get along well ,they never minded them much since they knew that Raj and Sam are another part of their past and these rivalries never last long . 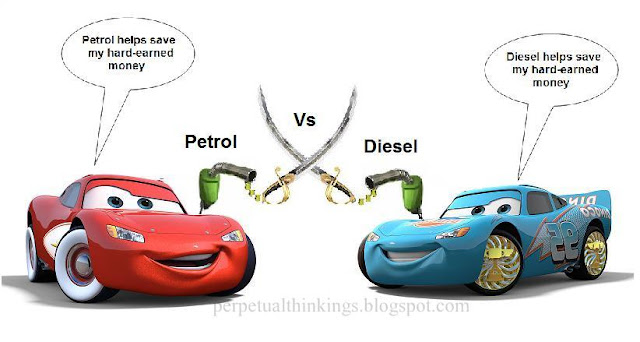 RAJ: Sam argument are stories of the past .Today we have Diesel cars that are quieter than in the past and the manufacturers have been able to tone down the noise level almost to the point that you wouldn't know it's a diesel from inside the car. More importantly they give a lot of mileage with the benefit of turbo boost which means they are more fuel efficient than any petrol car and they are impossible to stall.

SAM: Diesel cars need servicing every 5 to 6000 miles whereas a petrol needs servicing only when it is at 10 to 12000.Do that mean that you spend less ?

RAJ:My answer is yes.The extra MPG with a diesel seems worth the effort and it's harder for diesel to go bad than gasoline as they have better compression and more torque.

SAM:But it should be noted that you will spend five times the money in buying a diesel car than a petrol car .Diesel cars are very expensive and complex model to be build.Also ,they put out more particulate emissions than gasoline engines.So petrol engine are much better choice than diesel engine.

RAJ:Under the newer 2010 emission control, diesels have less emissions then same gas vehicle that means lower CO2 emissions.The Diesel car also stands for the 'Go Green ' element too.Many diesel engines can be easily upgraded to run on bio-diesel as well as recycled cooking oil which is good for the environment .The cost which you quoted as expensive becomes negligible under the rate of greater economy and more power for the same amount of fuel consumed in the longer run .

Everyone cheered Ram of his correct argument.Sam noticing that many started favoring Raj became very nervous.Yet,he was not ready to give in

SAM: But what about the smooth travelling inside the city. Doesn't  driving a petrol car differ from that of a diesel car ?Cant you see that diesel prices are rising  touching petrol's price ?.Very soon they even go  higher beating the price of the petrol .

Prof.Guna , a cautious man always supporting each and every one of his students interrupted : Well well students.We already have lots of points on pros and cons regarding the petrol and the diesel from both your sides.And that's enough for today's debate.And now the result is ,

I got to know about your views and as much researched by the companies and the people who drive (opting my students here out) , Diesel cars are a better choice taking into account of its performance ,the economy , the refinement and the particle emissions .


After the final result,the class dispersed approvingly and silently under Prof.Gunalan's control .

Back Outside it was raining heavily ,

Both Raj and Sam were ready to go home.Today being there final IPL cricket match ,Sam was busy searching for his father to come soon. He came .

Sam father Hari : Hello Sam.Hello Raj ,hasn't your father come yet?There is a big traffic jam out there because of the sudden flood , maybe your dad would come a bit late. Why don't you come in my car so I can drop you back at your home after the flood subsides.

SAM : Dad, don't you know there is an important IPL match today.We would miss the match if you do social works.

Sam father Hari cooled down his temper and was ready to answer him ,when Ram shouted "Daddy".Then without a word, he waved back to his friend Kumar and then to Raj and hurried back home with his son before more rain hits the city.

Raj and Raj's father Kumar made their way to their car too as fast as they can.Half way through their home,Raj saw someone familiar.Its none other than Sam's father Hari standing on the road.He told his father about it.They stopped and enquired. Mr.Hari's car had a break down and the engine was stalled due to flood water blocking the engine to run. 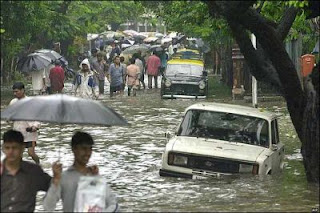 Mr.Kumar gave lift for Mr.Hari and his son since the flood was getting more and more bigger and wider.All the four of them had a bad time travelling home with the traffic jams and the rising flood.Finally as they made it to their homes ,

Mr.Hari said,"My God,what an car is this .Amazing drive and without much problem it brought us safely back to home with all those floods out there".

Mr.Kumar answered ,"Hey Thanks,you should thank the improved technology of the engine and its fuel in the car that made it run effectively"

Mr.Hari :"Fuel and yes the engine,that damn engine of my car .I have to service my car tomorrow and refill my petrol tank too and "

Mr Kumar interrupted ," Arey ,Switch to Diesel Man ".With a Diesel car you can have high fuel efficiency , longer engine life and moreover you can drive better around even during crisis time like flood .They also prove beneficial for a longer travel too.

As they conversed and got down , Raj smiled at Sam .

Sam slowly looked at Raj and thanked him for his timely help ignoring the fact of how he behaved at school that evening.

The next day all over Mumbai was the talk of the flood that shook Mumbai after a decade. For both Sam and Raj ,they have learned how to be helpful with each other after this incident .They are now very well versed with the right engine that helped them survive the flood.

Highlights of MultiJet Diesel Engine -the second generation common rail
Petrol Versus Diesel :
A wonderful comparison between a Petrol and Diesel Engine by TIMES DRIVE where two men take a spin in both the variants of the new Skoda Laura ,one filled with Petrol and the other with Diesel .