Santa Claus arrives at your door and you can know it !

Info Post
Uma Anandane
December 24, 2011
No Comment
Imagine a red fat bubbly man with a large smile and a large bag flying around and you are lucky enough to catch him on your mobile phone or video cam.He is described as a person with a large white bread , a protruding belly,beaming eyes with wide smile who loves gifting children.It is none other than our red clothed SANTA CLAUS whom we have heard through stories , books and in schools.This year he comes alive for all the children around the world .Before laughing at me , read fully so that  you can believe me that I am telling you the truth.You can track Santa Claus this year and the coming years with the help of NORAD (North American Aerospace Defence Command) and its predecessor CONAD (Continental Air Defense Command).

The Internet giant Google loves to step and expand its network in every aspects of Internet world.This time,they have clubbed with NORAD to track Santa's travel with the help of RADAR all around the world .Even they track the amounts of gifts delivered by him.Good news!

So, is Santa true??
Of course, He is ALIVE. And those who believe him is bestowed with love and gifts from him.NORAD believes in Santa and has been collecting datas from 1955 and now they have paired with Google tracking his flight and giving you the exact location of his travel through Google Earth. It is believed that Santa travels from North pole to South pole in his own flight, a herd of flying reindeer and so the NORAD is equipped to continuously track him all through the December from Christmas eve. 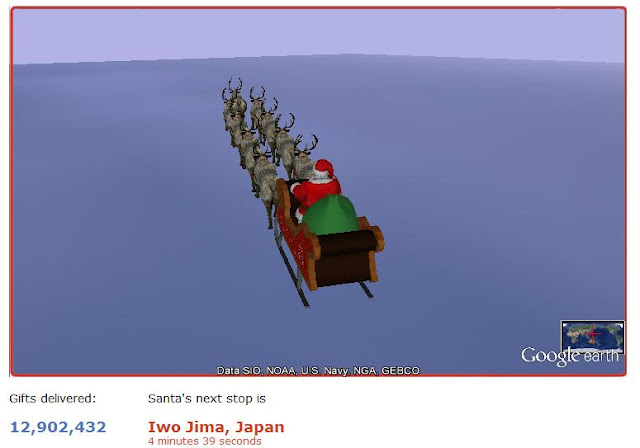 How do they track Santa?
NORAD uses four high-tech systems to track Santa – Radar, Satellites, Santa cams and Fighter jets .All the four equipments work all through the day collecting data and pushing them through Google Maps and Google Earth so that everyone now have an opportunity to see the REAL SANTA.

NORAD website provides the children of the world a special  December with writing letter for Santa ,uploading videos of Santa, a countdown village and tracking SANTA LIVE.Operation Good Will , another initiative by NORAD helps people to serve others and support each other. Free applications are available in Apple itunes and Android markets being available in all Google languages. Other social networking sites Face Book,Goggle Plus and Twitter also  offers tracking opportunities for a big red dot.

An accidentally developed system of tracking Santa now becomes the World's Official Santa Claus Tracker.Santa has already started his voyage and now travelling all around the globle with an enormous heart and gifts .

You can track Santa Claus entire route through Google Map as he travels around the world. You can see that Santa has been traveling from the East and is heading towards the west in a random path.The gifts locations are his path traveled. Click each gifts to know more about his travelling .