Save Wildlife from Extinction

Info Post
Uma Anandane
June 09, 2012
4 comments
Twenty years from now, I am afraid that the next generation would never see a Bumble Bee or a Sparrow or a Butterfly or even a Rhinoceros.Some species are really in the verge of extinction .We are already late on the path of salvation of those creatures yet not late then never . Few days back, I can recall watching a wildlife program in my Idiot..... No, through an Intelligent Box (without which I am unaware of the happenings around the world). They were talking about foxes , precisely they were people researching and tracking foxes in its regions.Being a dangerous species, foxes are said to live in large numbers in groups and they multiply faster.Foxes signal each other by making scent posts - by urinating on trees or rocks to announce their presence for mating.There had been a sudden decline in their race now due to bulk  hunting , by destructive pests and being frequent carriers of rabies.During the episode, the research team found out that as the wildlife was decreased in a certain area, certain growth of plants were also decreased leading to ecological imbalance in that part of the region.After a couple of years of study, few foxes captured from another region were led free on this particular region and studied .The scientist found that plants and trees grew larger and healthier leading to more balance in the region.That's Nature.

If this study is true for Foxes, then for almost all animals it should be True. Today , I don't see Sparrows as much I did decades back when I was young in my country India .And Fire flies, I never see them now, not even one to my dismay.Gone are the days where the night was filled with mobile lights that brought more life to the darkness in the night. And again, the butterflies and dragonflies were now less in number than compared decades ago where I along with my siblings went to humt them for my Insect study for my school project.I remember seeing the golden pupa (cocoon ) hanging down from the leaves of Arali Seddi (a plant called in tamil) on my garden and watching it to hatch one day into a colourful butterfly.
Long back ,my grandfather used to tell me about the days where the Koravan/Korathi (a particular tribe called Narikowa) bringing in Jungle Cat Meat and Blood and selling them in Town for Money .This Cat's blood when drank gives a man ten time strength and boost to his body and  the young hero's of that era did stay healthy till their 80's and 90's. Also , I knew and even saw the use of few plants that cured many human ailments . What we use to shave clean of our hair from body using Veet and other chemical products were done using Kuppaimeni (குப்பைமேணி/Acalifa indica )and Turmeric on the body and face.Kuppaimeni is also called Poonai Vanangi since it is a plant adored by the cats and even eaten by the cats (I guess it is the only plant the cats eats) as it has lot of Medicinal Values , helps all types of skin ailments , makes the body hair fall and also a provides healthy skin to the body.
The above are few examples I recollected of the endangered species in the world.What we have now can only be saved and for doing so Awareness is needed. This is what I am doing with this post now, a little of what I can do.
Apart from the known species of extinct Dinosaurs  , below are few picture collage of extinct animals and birds created by me

Extinct Birds Of The World 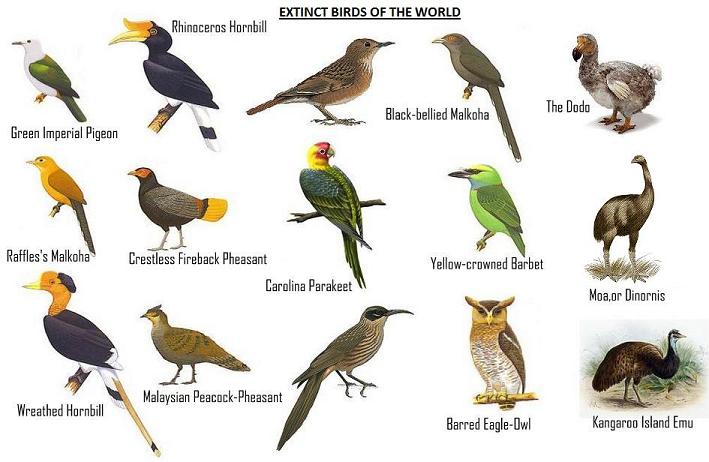 The above are already extincted ones .Today we face many more ready to extinct species.Bees , our bumble bees are one such endangered insects which if completely dies out will take along with it the flora and fauna to extinction.Forget the Honey's and all the foods made up with honey's without the Bees.Then comes the Rhinoceros , another well known one-horned animal on the brink of extinction. The reasons being hunting , poaching of Rhino horn for Chinese Medicine and Habitat loss.Indian Vulture ,Bengal Tigers, Forest Owl,Himalayan Quail,Spoon Billed Sandpiper ,Large Rock Rat ,Namdapha Flying Squirrel and more is being added day by day to the list of endangered species.

How and what we can do to save Wildlife ?
1.Help the Zoo
Zoos provide various programs to helps endangered species of animals through breeding, professional training, habitat protection, membership programs and also through scientific research.I have also come across programs such as adopt an animal and give donations to the Zoos.Being a part of any programs is free and also welcomed by the zoo authorities.A little of what we can donate would make a difference
2.Stop Violence against Animals
Killing of animals for meats and goods should be stopped and these programs which is already on the run should be supported through social networking sites .
3.Plant more Trees and Plants
Planting more trees and conserving the old ones also protects the environment . Many habitat of animals and birds are protected helping them to multiply naturally . Our very own Honey Bees would be the happiest as they lead their life with the pollen grains collected from the flowers .Also creating a  natural habitat would preserve a lot of wildlife unknown to us providing more available oxygen to the world.
4.Stop using Insecticides and Pesticides  :
Let the plants grow on natural composts .Use of Insecticides and Pesticides harms the worms and other insects breaking the Food Chain and changing the Cycle of evolution .Also they make the soil poisonous making it infertile in the long run.Eating the leaves and fruits produced by those plants also   harms the Humans and Animals giving them less resistance and paving path to a new outbreak of diseases.
5.Respect the Animals
Activities based on psuedo-science like eating an animal's meat or using its bones etc in medicines has caused a lot of harm to wildlife.So make sure you respect them as another life
6.Recycle
Recycling is less in Indian homes as compared to other countries.Government must stress and provide support of recycling products from Home to Industries.We Public can also recycle things that can be recycled and reduce the consumption of non-recyclable plastic bags.
7.Study and Research Herbs :
One thing that amazes me is the use of Herbs as medicine decades ago by our ancestors. Most of the knowledge has been suppressed now and yet the few that remains are made into money.Trying to renew those knowledge helps in lower consumption of medicine by Human beings as well as saving the environment by harmful chemicals  in turn providing a better environment.
8.Lend your Support :
Support the organisation Volunteering for saving of wildlife and environment through sharing it in social networks, providing funding or telling and teaching about it to the children.