Using a mobile phone camera to capture pictures and videos has become very common today, even while travelling. Quite recently we went for a trip to the Roman Baths and I had been using my Nexus 5 mobile phone a lot to click images wherever I went. Towards the end of my trip, my phone battery completely drained and left me with a dead phone. All my way back home, I was just looking at my dead phone and wished that investing in a portable charger would have been much better.

Why need a portable charger? With so many devices that depend upon battery power but with limited power storage that might run off any time, it always becomes necessary to have a backup power especially while travelling or when away from home. A portable charger becomes invaluable by topping up my phone battery and keeping me connected all time. The options available in the market are enormous, ranging from size, capacity, weight, design, price to environment friendly.


Thankfully enough, I had been offered Power Theory Power Banks to review on my blog and I had used it enough to able to provide what I actually feel about this mobile chargers.

The power charger models 10000mAh and 5000mAh, both arrived about 50%- 75% charged, extending the life of the lithium-ion batteries until it reaches home safe and sound. It was quite well built and there were no removable parts of any kind (like a cover or so). All it needed were the input wires and the output wires which were offered at an optimum size, not too long or short but just enough to fit in the pocket or purse. Both the models comes in black and while colour. 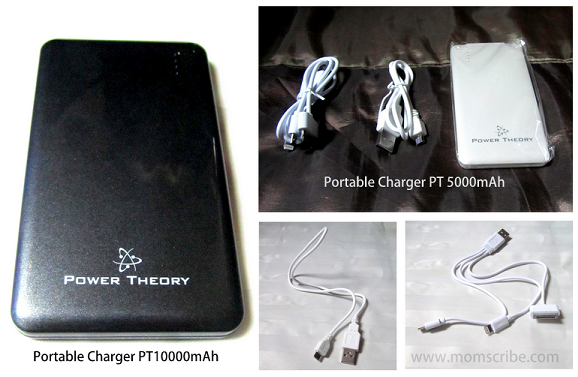 Power theory power bank uses lithium polymer battery (Li-Polymer) which are durable, much safer and have a very low self discharge rate.

Choosing a power bank depends upon several factors and most of them are met by the Power theory Power Banks, 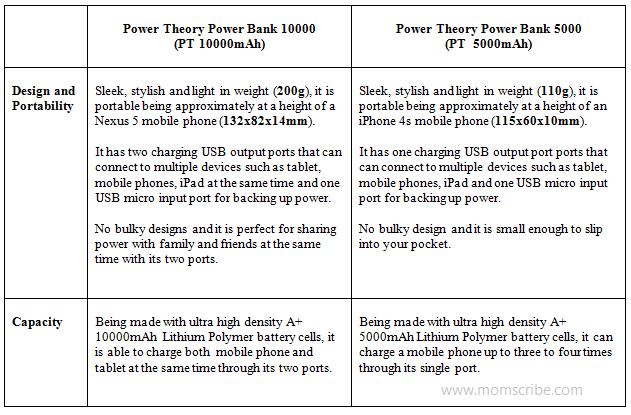 Other than the differences above, it has many similar features that make this power bank quite useful for the price offered. The Power Theory power banks support what is called a “Passthrough charging” feature which allows them to simultaneously charge themselves and the mobile devices either using your Laptop USB power or DC power to make sure that the power bank is always topped up. 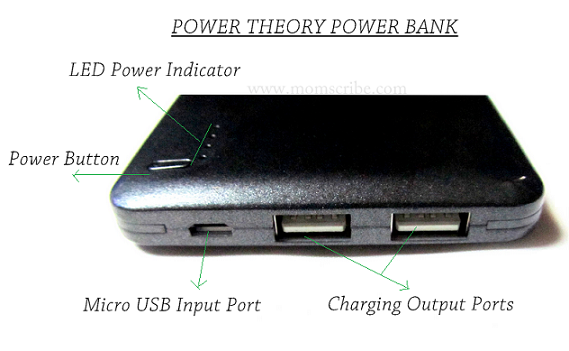 You can find out how much power is left in the power bank by pressing the power button on its top corner. This in turn switches on the series of built-in LED flashlights near the power button which lights up showing the remaining power. (see the table below for battery indicator instructions). 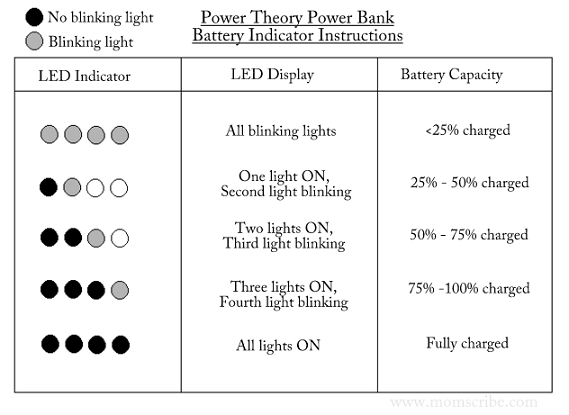 As expected when buying any portable battery charger, you won’t receive any USB charger plug along with the product. To charge the power bank, you can either use the USB port of the laptop device or  use the tablet/mobile USB charger.

Overall, at an offer price of £23.95 for the 10000mAh capacity model and £14.95 for the 5000mAh model, the battery charger is sleek, lightweight, portable,  offers fast charging and comes with useful features like pass-through charging and auto-on/-off functionality.

Now, I am not travelling without my portable charger with me. Having one battery charger handy makes me feel at ease since I know that my mobile can be charged anytime anywhere. Going by its looks and capacity, Power Theory Battery chargers make my travel extremely reliable and durable.