Info Post
Uma Anandane
September 16, 2015
2 comments
LEGO bricks have been a part of my childhood and now continues to be with my children as well. Today with many varieties and specializations, no one can deny that LEGO is full of ideas from making still buildings, cars, flowers, making stop motion LEGO movies to being served as a model for future inventions.


The recent release by DK publishing “The LEGO awesome ideas” is packed with examples of such ideas that will help ignite the imagination of children using LEGO bricks. The book comes with a 3D lenticular cover that is quite striking to eyes with depth, direction and movement perception. The content of the book is about 200 pages with different sections such as from outer space, fantasy land, modern metropolis, the wild west and the real world.

The book is broken down into lot of models that helps children to get inspired with ideas and models that they can build using the LEGO bricks. And from there, they start their adventure journey using their creation as a part of their game. 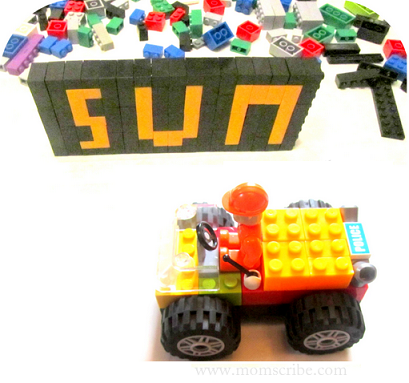 The First Impression of my Kids

I have seen my kids can play with LEGO bricks a lot of time to create their own stuffs but this time, I handed them the book and asked them to create something from the book. Both Cherry and Berry were delighted at the sight of the book and quickly accepted the challenge. The colourful and bright images inside the book excited them and they soon started to assemble their bricks choosing a chapter from the book. At first, they both had confusion of selecting the right size or colour to create a similar model that existed in the book which was indeed a cumbersome job for them. The reason was that they did not exactly have the same LEGO set that might help them to bring an exact model that exists in the book. And also, with dozens of different models and images, it was not always possible to have everything that existed in the book. But soon after some unsuccessful attempts, they understood that they don’t need to have a look-alike image as in the book but something that resembles the idea that the book itself gave. And that was just the beginning….

Cherry loved creating a mobile phone for herself using the LEGO bricks and Berry was after the car stuffs as usual.
As for me, one of my favourite part of the book was creating alphabets using the LEGO bricks as it gave a whole new look on how to create letters and words using simple mix and match. The arrangement of how we want our letters to appear is what we should take care of before we stack the bricks together. If we get it right, then is is quite easy to bring all the alphabets into our LEGO creations.

We all had hours of fun making awesome LEGO creation using the ideas available from the book. The crisp and clear photography in the book served as a good example for the young ones making them understand what exactly they need to build with their bricks. The writings on the book were an additional advantage for more experienced and much older builders. Personally, the book was add-on educational item on my book shelf that can be used regardless of age. Overall, the book was kid-friendly and will serve as a stepping stone for my kids to explore and build more LEGO creations. You can get this "LEGO Awesome Ideas" book at Amazon UK.

Disclosure : I received the above product for the purpose of writing a honest review and all opinions are my own.