Info Post
Uma Anandane
January 31, 2011
8 comments
It was the first day of my college.I was a pampered child in my family and co-educated environment was something new to me.I was a little nervous thinking of my college and how the environment would be.I dressed myself best and was accompanied by my grandma to the bus stop where my college bus would arrive to pick me up.We were not alone.A man who must be of my age was also standing there.He was pleasantly dressed and was tall with dusky appearance.My grandma enquired about him and we found out that he was a senior student doing second year in my college.Soon my grandma gave a satisfied look and asked him to take care of me giving him a brief story of my state.We got introduced ourselves.I got to know that his name was Ajay.As we talked ,our college bus came and we climbed inside the bus.Ajay went straight to the backseat and sat among his friends.I sat alone near the window seat in the front.


Our bus started moving towards our college which was nearly an hour travel from our area.My eyes examined the bus for any first year students like me but all I saw were very few senior girls and that too they were interested in their own chats.After 15 mins of travel,I noticed that Ajay along with another friend came near me and sat.His smile was whimsical and he said to his friend ."Hey, Ragav do you know the joke of the day?This madam's grandma (and that's me) asked me to take care of this little baby.One thing she doesn't know is that I am the great rowdy of this college ", and he laughed out loud.All his other friends joined him in and were making fun of me.I felt so sick and I could feel few drops gathering near my eyes.I controlled my tears very hard.Our college bus came to an halt inside the college and we all climbed down from our bus.


Suddenly a sunken feeling came in me that I was alone in a strange new place.And the only one friend who I thought I  knew made me cry the very first day.I carried my bag and walked slowly towards the entrance to check the notice board for any details put up for the first year students.During my walk ,I never failed to notice that Ajay was following me behind.I went near the notice bored  and found that the name lists have been put up as I have assumed to be. My name was assigned to a Class named 'D'.I gave a slight sigh and started to move to find my class.Ajay suddenly bumped in front me and asked me which class was I assigned to? . I told him and he asked me to follow him saying that he has given his word to my grandma to take care of me(*funny* ,I thought) .With no other option left ,I  started to follow him to my class.The whole day somehow or the other he ragged me,made fun of me and also strangely helped me from the other  seniors students.


Days went by and in my second year, we became good friends.During our college days ,I came to know that Ajay was smart in his studies although he was very naughty.He was also helpful in nature to his friends in their studies.We had the same taste.We loved Music and most of all we loved to read Books(mainly Novels and Bharathiyar Poetries). We argued about Mario Puzo's God Father series,the  Harry Potter's and the Alfred Hitchcock 's  a great deal. He used to refer me to some interesting books in the library and I also sometimes do the same to him.


One day,he came to me with a book and asked me to read it fully ,to read every nook and corner of the book.I smiled and got the book from him.It was Stephenie Meyer 'The Twilight Saga',the book I ever wanted to read.In my home,I started to read it lying on my bed as usual.The story was interesting from the first page itself.I continued to read it and finally in one page I found a word circled and in blue pen it was written above ,'Do you want to know  a untold secret ,if so turn to page 50'.I was in my 2nd chapter.I never minded it and continued to read it till the 50th page.There another word was circled and again in blue pen it was written above,'Just wait ...the secret is very special just take a deep breath and turn to page 200'.My Temptation overcame my restrain  and I turned to page 200.There again the same was repeated until I reached the final page.It was that three letter word written in capital letters 'I LOVE YOU '.A lips curved to a smile and I thought about the guy who did this innovative proposal.


The next day in my college, Ajay met me at the canteen.He was in his best looks.He sat near me , ordered our lunch and then we ate together.He was all silent during our lunch.After finishing it ,slowly he opened up and asked me,"Did you read the book I gave you?".


I replied,"Yes, it was a wonderful book.It kept me hooked on till mid-night."


He said,"Hmmm." "Okay,did you find anything else interesting in that book other than the story" he asked me again.


I replied,"Oh yes!I know what you were referring to.That circled word and that secret thing.Is'nt it? Yes,I read that too.Very funny.I cant imagine who writes like this in library books.Its so stupid.He could have used his brains in some other thing. If I ever find him,I will ask him why being an educated fellow he involves in these kinds of shits."


Ajay smiled but said nothing.
We indulged in conversation for sometime and then went back to our classes.


That night,I received a phone call form Ajay.We talked for sometime and then suddenly he asked me
"Do you want to know who did those shits in that novel you referred to"?


He replied,"Well,yes.It was none other than me"


I was perplexed.
I asked him why he did it.
He told me,"I meant that to you.I wrote to let out my feelings about you "


I was shocked to death.I felt so very angry at him and at the same time felt sorry for him.He was a best friend of mine and was a total teetotaler.I remained in silence.It was as if a whole rush of feelings were bursting inside me to fight with him.To ask him whether in any time I behaved in that way or did I ever talked in a way that might have created this feeling about me.But I still remained in silence.Without speaking a word, I switched off my mobile and went off to bed.In my mind I had the conflicting emotions,both angry and sympathy fighting with each other and finally I took a paper and a pen and wrote a letter to him.
The following day,I gave the letter to him.He read it and then slowly agreed that I was correct.In that letter,I had mentioned that I was not mentally prepared to take any important decision regarding this matter.Also pointing out yesterday's story,I dont want to lose his friendship either.We debated and finally we both agreed to keep a full stop to this at present and be friends as usual .I was relieved.
I dont know whether in future I will reciprocate his love for me but one thing is for sure.He is my best friend  and will be my Best Friend ever. 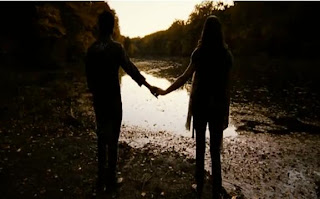 PS:
This post is written as a part of Close up'Fire-freeze' contest in Indiblogger .