Info Post
Uma Anandane
February 03, 2011
4 comments
We call it a "Miracle" when something which we think impossible happens just to make us happy. Those people who believe in God truly believes in Miracles. A life saved is a miracle. A wish granted is a miracle. An impossible luck is a miracle. It happens everywhere. Everyday we are all blessed with a miracle-yes,all of us. We are in human form, so many actions unknown to us is taking place inside our body to keep us alive. You just eat the food through your mouth and then excrete the waste when ready. What happens in between the two? Lots of minute miracles like digestion, assimilation, metabolism, giving birth to new human being, breathing and excreting.... many biological terms which we don't even need to know in detail but still they happen every day, every minute and every second in our own body. Isn't it a Miracle that happens to everyone every day?

When something out of the ordinary happens for good either to the body or the mind different from our normal life is another miracle awaiting to happen. One such miracle is the story below,

I was so close to her. She is my only friend.We had the same wavelength and shared same taste except for one. Belief in God. I was completely an introvert person and she was just the opposite-an extrovert person. So she was more out going than me and had more friends and more life experiences. She doesn't believe anything unless they are proved. I am just the opposite, I believe everything, almost anything. Most of all I believed God. I blindly believe because its been inculcated from my birth and also I believe that this is the one and only reason which gives us hope to move on in our life. One day, we argued about the presence of God and made a deal. It was in our final year around. That is, to share our experience after 5 years, I with believing God and She without believing God.

With so many experiences, we did meet after 5 years in our home town. I gave birth to my son and she came to see me. (In between we used to chat through phone though not in person) She was most successful, did her MS in US and married to an Engineer and settled there. After all hard work does pay. I was successful too, got my B.E degree and was working in a Pvt.company, married to an Engineer and now blessed with a kid. But I missed something in her. Her usual jovial character was missing. I asked and only then she started to cry. She told me she had an accident in between and was never blessed to have a child in future. She lost hope after seeing many doctors and fertility clinics. The doctors told that her ovaries are weak in which case it will be difficult to conceive. She became depressed and for a change of place they came back to India on a 2 months holiday.

After landing India, she was happy to hear about me and came to see me. Just then something stumbled on my mind and in an instinct, I told her about what I believed - true stories I heard about a particular temple. I soon convinced her to come to temple with me . There we met a saint, who is a devotee of Goddess Durga. He asked us to come again at a full moon day along with a lemon. And we did as we were told to do. He took the lemon, prayed goddess Durga and asked my friend to eat it fully. I don't know what happened next. She took the lemon from the saint and ate it fully without uttering a word. He asked us to trust God, leave everything to hi, and go home to continue with our usual routine. Back home, we discussed about it and made sure not to tell anyone.

Days went by, I called her up after four weeks. She told me that she will be packing of in a week. I told her that I will be coming to send her off soon. As decided, my husband and I went to send off the day the before their departure. Her husband was unpacking off everything. When asked, he told us the trip has been cancelled and he has decided to work off shore. I was confused. He asked me to see my friend who was in her room. When I entered, I saw her doing something unusual. She was writing "Sri Rama Jeyam" in a notebook. I waited for her to finish. After finishing, she looked up and saw me standing near her bed. I saw tears drops gathering in her eyes. She came up to me and hugged me tight. I enquired her why she was crying and why her trip has been cancelled. Then, slowly she told me the reason - the reason was her miracle. Yes, she was conceived and is going to be a mother soon. She now believed God with all her heart. And that why she has been writing "Sri Rama Jeyam" and will do so for her safe delivery. I felt happy for her and thanked the Lord. Om Shakthi!

There are sometimes when belief in the power of God brings such miracle in our life. Whatever God we believe in, be any religion or any place, some power is there to guide and help us always. If you don't believe in God, just believe in yourself. God lives within us too. Believe and ask, it shall be given. Our power of thinking and inculcating that belief moves us forward to make things come true. This world is a learning place, sharing our hopes, holding hands together and moving to eternity just with a single word "TRUST". 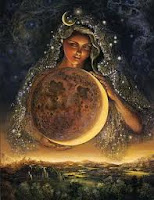