Who are the Calender Girls ? A Movie Review

Info Post
Uma Anandane
May 11, 2011
3 comments
Calender Girls simply means girls in the calender .How does that sound? Funny !.Yes , I was struck by the idea of writing a post about this after the Calender girls 2011 audition in Milton Keynes Theater. This type of photographic inspiration was successfully brought out by an English comedy film "Calender Girls" directed by Nigel Cole in the year 2003.A part of this movie is fictional though the script has a real storyline. 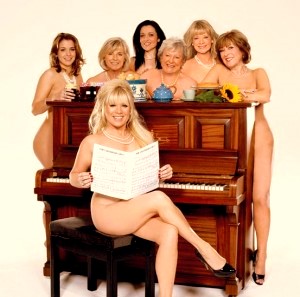 The Story goes like this.Chris and Annie are two good friends in the age group of above 40 and are also the members of Women's Institute.The women decided to pose for a nude calendar to raise money with the aim of purchasing a sofa for the visitors lounge in the hospital where John was treated for leukemia.From the onset of his illness ,John grew Sunflowers hoping he would get cured before they grew.But it was not the case.He died of leukemia .So as when the womens were struck with the idea of posing nude while engaged in everyday activities like cooking and cleaning they made the Sunflower as a symbol of the group's fund raising for leukemia and lymphomas.Every snap features a sunflower - John's favorite.
Nude photography ?You may wonder.Some may like it and some may not.But this nude in Calender Girls means something related to art and never creates offense to the eyes.But brings the beauty of nature and paintings in real in form of photography.It is not to be forgotten that the models ranged in this calender are in age from 45 to 65 and the total number of women who posed nude where eleven .The photos took off and were a big hits which helped them to raise money in over £2 million for Leukaemia Research, the UK's leading blood cancer charity till date.On the final note this movie scores well and it is a must watch movie .