Harry Potter - a brief summary on the books

Info Post
Uma Anandane
July 18, 2011
9 comments
The Potter Series is a magical world of love, fun, romance, hate, curse and rebirth. The young potter acted by Daniel Radcliffe saw himself growing up along with these series with his close pals Ron Weasley (acted by Rupert Grint) and Hermione Granger (acted by Emma Watson).

The Harry Potter film is based on the book series written by J. K. Rowling, a British author  who got this idea of magic related school story while travelling on a train back from work. The film was distributed by Warner Bros and made into eight film series starting from the year 2001 to 2011 in a span of 10 years. The film was produced by David Heyman and Steve Kloves wrote the screenplay for this film. As an ardent fan of Harry Potter, I have written a brief summary of the series.

Harry Potter Syndrome:
It is a syndrome in which one believes himself to be a Harry Potter, believes in magic and tries magic - thinking that he can save the world. It is no wonder it happens in the book reading world where we tend to become the protagonist in the book. With Harry Potter series, not becoming Harry Potter after reading around seven books is far from happening. 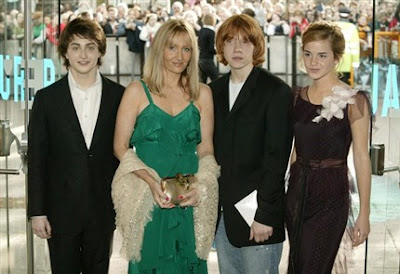 Harry Potter and the Philosopher's Stone (2001)

THE  SNIPPETS OF THE SEVEN SERIES:
Harry Potter and the Philosopher's Stone begins with Harry Potter, a shy and self-doubting boy wizard being brought up by his awful aunt Petunia and uncle Vernon along with his fat cousin Dudley. Dudley lives a life of king, whereas Harry was more like a servant. He has a lightening shaped scar on his forehead which occurred when he was a baby during a car crash in which it was believed that he had lost his parents. But ,the real fact was that he had received the scar after an attack by the evil and powerful wizard Voldemort known as "You-Know-Who" who killed Harry's Parents. This truth is only known to the the Headmaster and Deputy Headmistress of Hogwarts school of Witchcraft. They left Harry with his uncle Vernon after this awful incident and are waiting to get him back when he is at the right age to attend the Hogwarts school. Days went by and finally one day when Harry was 11 years old, he receives a mysterious mail (through an owl ) asking him to attend the Hogwarts school of wizards which is known to be the best wizard school in the world.

After, a little struggle with his uncle and aunt, he enters the school with the help of the Half-giant Rubeus. The Hogwarts school of wizards is no ordinary school. Harry is continuously tested for his skills and he slowly starts to learn the pros and cons of Witchcraft and Wizardry along with his new friends Hermione and Ron Weasley during his first year at the school. During the term end, Harry is selected to participate in the quest for the Philosopher stone and as expected wins the game. What he is unaware is that the Philosopher stone he had won could be his armor protecting him from Lord Voldemort who is following him stealthily as the stone can be used to brew an elixir that can make the drinker immortal.

The series continues with Harry Potter and the Chamber of Secrets, a sequel into Harry Potter's second year at the school. Ron's younger sister Ginny finds a book belonging to Lord Voldemort (dairy of Voldemort). In that book, she starts to read out a chapter about the 'Chamber of secrets'. But what she did not expect was that she accidentally created a gateway for an ancient monster to come out into their world. The monster starts to disturb the children in the Hogwarts school. The novel slowly explores the history of Hogwarts, the tale of the Chamber and how it came into existence. Harry comes to know more about himself, his ability to speak the language of the snakes (a rare dark art) and also learns few secrets about Lord Voldemort. The book ends with Harry fighting the monster saving Ginny and unknowingly destroys a piece of a soul (horcrux) hidden by Lord Voldemort in the dairy (book) .

Following the series is the Harry Potter and the Prisoner of Azkaban elaborating Harry's third year in the Hogwarts. In this series, Harry comes to know about Remus Lupin and Sirius Black, the friends of his father. The former teaches him some defensive measures to protect himself against the dark creatures who has the power to devour a human soul (dementors) and the latter happens to be an escaped murderer believed to have assisted Lord Voldemort in the deaths of Harry's parents.

Harry Potter and the Goblet of Fire starts with Harry's fourth year at his magical school. Here, Harry was misguided by Professor Alastor "Mad-Eye" Moody (Voldemort's supporter) who made Harry participate in a dangerous Triwizard Tournament to bring Harry down and letting Voldemort to succeed. Fortunately, Harry escapes his plans but made Voldemort enter the mortal word of the wizards.

The fifth book "Harry Potter and the Order of the Phoenix" marks the fifth year of Harry Potter at Hogwarts school. During his term, Harry encounters a secret society called the Order of the Phoenix which was reactivated due to the arrival of Voldemort. The main duty of the secret society is to protect Harry and to defeat Voldemort's supporters. With so many things escalating, the school was transformed under the authority of Dolores Umbridge, the High Inquisitor of Hogwarts. One of the transformation is that she banned the students from learning the defense art against the dark magic. So, Harry steps in and forms a secret study group known as "Dumbledore's army" in order to teach his classmates the higher skills of defense against the dark arts he has learned. In the end, Harry discovers Voldemort's actions telepathically (through past connections), fights Voldemort's Death Eaters along with his friends thereby saving Hogwarts once again.

The sixth year at school deals with Voldemort's open war against Harry and Harry's adolescence. Harry begins dating Ginny Weasley. He also stumbles upon an old potions textbook filled with annotations and recommendations signed by a mysterious writer, the Half-Blood Prince marking another book "Harry Potter and the Half-Blood Prince". He also learns from Albus Dumbledore that Voldemort's soul is splintered into a series of horcruxes, an evil enchanted items hidden in various locations. Harry's adversary Darco Malfoy attempts to attack Dumbledore at various times and finally Professor Snape kills Dumbledore towards the end of the book.

The final book, Harry Potter and the Deathly Hallows is divided into two parts where Voldemort has completed his ascension to power and gains control of the Ministry of Magic. Harry and his friends drop out of the school to find and destroy the remaining horcruxes of Voldemort. As they search the horcruxes, they come to know more about the Professor Snape who always disliked Harry from the beginning of the novel and the past of Mr.Dumbledore. As the world would have seen as on July 15, 2011, the book/movie  concludes with Harry discovering himself as one of the horcruxes and so surrenders himself to Voldemort who cast a "Killing curse" on Harry. But soon Dumbledore explains that the Horcrux inside Harry has been destroyed when Voldemort used Harry's blood to regain his full strength. Finally towards the end, Harry returns and defeats Voldemort and his supporters with the help of his friends (Ron and Hermione) along with the members of the Order of the Phoenix, his teachers and students thus saving the world of Witchcraft and Wizardry.

If you are one of an ardent admirer of the Potter series, you cannot forgot to notice that the Harry Potter syndrome brushing you from time to time. Happy Magic with Harry Potter!