Fell in love with the Samsung Galaxy Tablet 750 aka Tab 10.1

Info Post
Uma Anandane
August 21, 2011
5 comments
One of the leading provider of Electronic devices has successfullly launched its new slim and sleek Samsung galaxy tab 750 on Delhi wednesday on 10 August.It is the most portable tablet in the market boasting of a sublime slim factor.  Samsung Galaxy Tab 750 also known as Samsung Galaxy Tab 10.1 (for 10.1 inch ) is the latest Android  powered tablet from Samsung.

The Samsung Media launch was a huge success.The launch was stunning with its clear cut reviews and talks of Younghee Lee,vice president of global marketing at Samsung , Mr.Ranjeet Yadav, head of Samsung India, Asim Varsi director of Samsung mobiles and the Indian Bollywood actress Lara Dutta.

INSIDE SCOOP OF THE TABLET 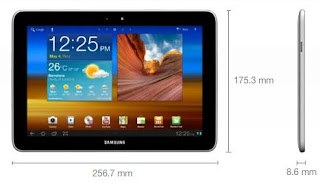 Being tagged the world thinnest tablet ,this TouchWiz even thinner than iPad 2  with its 565 grams weight and 8.6 mm thickness it is easily portable where ever you go.The immense mobility this Tab provides along with most effective features brings lots of change of how we use the visual pad and Internet.


These positives brings a big change in the field of education where text books can be easily replaced by the samsung tablet. Also, it provides a wonderful platform for Presentations in Schools and in Conference at a simple touch .

The Kobo e-book application found in this tablet provides a virtual book self kind of feel with a kindle experience on it.The Magazine like view with flipping pages makes reading easy and great joy.No more loads so you can read your e-books even while travelling on road.

The Video quality is rich on-board 1280x800 LCD display ,sublime contrast ratios, impressive brightness levels and best in class viewing angles. It plays almost any format of MPEG 4/H263/H264,Divx,Xvid .It has a playback of 1080p Full HD video @ 30fps , meaning it can play a full HD video at 1080 at 30 frames per second.Also it can record a full HD video at 720 p.Overall, the Video boasts of amazing high resolution definition video content along with Video Playback,Video Recording,Video Messaging and Video Telephony with Google talk video chat.
The Samsung Galaxy 10.1 has two cameras one at the rear end and other at the front end with a resolution of 3.2-megapixel camera, secondary 2-megapixel.The rear end camera is used to capture photographs and videos .And the front end camera is primarily used for video conferencing and for Video Telephony.the camera supports LED flash and auto-focus facility.The image quality of the pictures are very visual and the touch zooming in and out provides more significant details of the picture.

PERFORMANCE
The Samsung Galaxy 10.1  are stacked with the best engine in the business .They possess1GHz dual core NVIDIA Tegar two processor , 1GB RAM ,Connectivity capability of these devices being best in business , Bluetooth 3.0 @ 15Mbps ,HSPA+ @ 21 Mbps Download speed and 5.76 Mbps Upload speed along with Wi-Fi  direct @ 20 Mbps transfer speed provides a stunning unbelivable speed that a 1GB of Movie can be downloaded in 5 munitues. It has wonderful  Multi -Connectivity feature
This tablet 10.1 has the ability switch between multiple windows in ease without interrupting the various programs running in the background .You can open several tab at the same time using Google chrome as you the same in computers. The browser has fast loading and response speed.It has Better Multitasking feature.

OPERATING SYSTEM
This tablet is been provided with the latest operating system from Android stable called as Android 3.1 HoneyComb operating system which is a tablet specific OS.This OS is truly customized for the Tablets and Samsung also has layered it with its own signature touch with 4.0 version from Samsung Galaxy S2.This provides a better user interface with any amount customization and also stacks many effective applications . 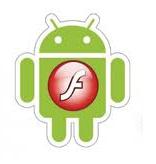 It also provides an Android Browser with a huge app catalogue in the Android market for easy browsing of the web and has a pre-installed Adobe Flash Player 10.3 support for viewing online media content  .The full flash support helps in playing all the advanced flash based applications like Videos, games, apps etc. flawlessly .The Adobe Flash Player supporting the Tablets OS provides an interactive flash rich content on the tablet.Overall it is a power pack browsing and media rich experience.

BATTERY LIFE
It has an inbuilt 700mAh battery. And it has a stand-by time with  2G upto 2120 Hr and with 3G upto 1840 Hr. So , it is obvious that the battery last for utmost 9 hours with continuous tabbing.

SWYPE AND MOBILE PRINTING
Typing is now easier on the Tab 10.1 with Swype support, which allows users to type with one hand by tracing a line between letterIt has the ability to re-size the keyboard, move the virtual keyboard anywhere on the screen and of course, type faster by swyping.Also you can print documents and pictures wirelessly from the Galaxy Tab 10.1 to any compatible printer.

APPLICATIONS
The Samsung Galaxy Tablet 10.1 supports a large number of  Google Mobile Services most of which we are already familiar with like
Other Applications include

Social Hub:
A large number of consumers use this tablet to stay connected .And samsung does'nt fail to satisy their needs.It has a special feature called Social Hub wherein all the internet networking connections like email, contacts and social networking sites like Facebook,T witter,etc are merged into a single screen providing the feeling of a hub. 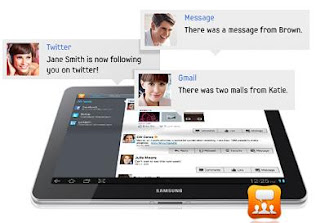 Retail Mode 2
Samsung apparently slipped out a new "app" named as a Retail Mode which provides a store mode to be downloaded from Samsung Apps and installed.Then according to sources outside , using the password of  "5444" will grant the access needed to get it running on a current Galaxy Tab.

Polaris Office
The Quick office features provides the function of office documents like we do on a normal PC in seamless way and they would be helpful for any professionals, office goers and even in the field of education.This robust application allows you to create, edit and manage Word, Excel and PowerPoint documents on the fly.


G-Mail
The Gmail app uses a multi-pane interface that displays all of your emails on one side of the screen and the main body on the right mimicing the looks of Microsoft Outlook providing more time savings.To make use of this application ,all you need is a gmail account .

E-Book
Samsung has an ebook application provided by Kobo  ebook industry.This application will give customers a wireless access to the entire Borders and Kobo bookstore with over 2.2 million titles—over a million of which Kobo claims can be downloaded free.The Readers Hub syncs reading across devices, supports ePub and PDF titles, and has simple navigation through the Tab's touch screen.

Second TV
Samsung 2nd TV is an application for watching and controlling the Television from your Samsung Galaxy Tablet.Samsung with its TwinView technology has the ability to stream Samsung TV content to a mobile device. The current software turns an Android-powered Galaxy gadget into a touchscreen remote control.This app will allow the streaming of a separate TV channel on to a Samsung mobile device. 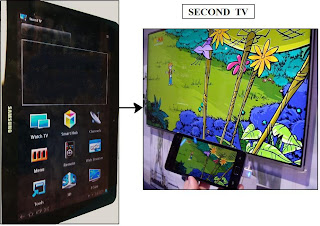 PRICE
The quoted price of this Samsung Galaxy Tab 10.1 is


TEST DRIVE
Now you can test drive this Samsung Galaxy Tablet through the Online Simulator .Check out the features in a fly and off you go to buy and own one .

WHAT YOU DON'T HAVE?
It has no USB slot and no external storage possible. In case you buy a 16GB , you cannot expand it to a 32GB unlike other samsung products .Also for additional storage space you need to buy a USB adapter .Moreover, it does not support Voice Calling facility .However , with Skype, Fring, Google+ we can still make Voice calling facility although direct calling is not possible .Other than these cons ,Samsung Galaxy is much better than iPad2 with overall picture quality, light feather like weight, its processor speed, 3G, EDGE and GPRS facility.

CONCLUSION
The tablet is phenomental with its optimized sleek appreance and rich multimedia content.It provides new ways to support the consumers like the doctors who have developed a Medical appliction for this Tab 10.1.Dr V.V.Ravindra and Dr.Umnag Mathur has made Vbond Vita for Mobile Clinic possible specially developed for the Medical Practitioners.This application uses Samsung Galaxy Tab 10.1 as the Clinic Management Frontend and Google Cloud is used as its back-end providing a great mobility with less cost. Clinic on the move tab.In rural areas too, a tab provides to be convenient and useful .A picture / image of a patient (say with skin disease) from rural area is pictured and shared to other doctors located in some other places for consultations.What not? The Tablet revolution is bring more mobility and usabilty in the field of Education, Home, Office, Hospitals, and even in Parliaments .It  is becoming a part of everyone's life.