Info Post
Uma Anandane
October 28, 2011
2 comments
I am not a usual movie reviewer of the kind.I blog in order to satisfy the need of my mind being used fruitfully. Like I have said I have always been attracted to nature's magical ways and mysteries that lie hidden behind the universe.But this time I had to change my decision because this Movie had something that made me proud and also think twice as much.So I hereby pay a tribute by writing  a review about it.

Aezhaam Arivu or the seventh sense in English translation is another blockbuster movie starring actor Surya ,actress Shruthi Hassan ,directed by A.R.Murugadass and photography by Ravi K.Chandran.The film was a science fiction thriller involving Bio-war, Hypnotism controlling minds , Genetic Engineering and ancient revival of the history of Monk Bodhidharma, a greatest Zen master who happens to be a Tamilain.(Hats off Tamiza!).I was hooked from the beginning of the movie to its end .The movie had a important message of creating awareness of  reviving the ancient cultures of India.It also stresses on learning our history and teaching the same to our generations. 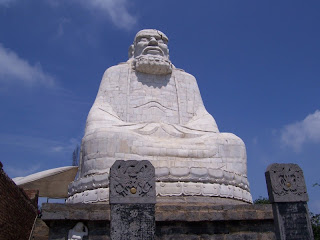 The movie starts with the introduction of Bodhidharma (Actor Surya) , a Buddhist monk of 5th/6th century who taught martial arts of Zen and Shaolinquan in China.He was said to be born in Kanchipuram , Tamil Nadu, India.The  director tried to show some proof of this facts in his film.Bodhidhrama leaves his motherland to China in order to save its people from the forthcoming danger.At first, the people of China thought him to be dangerous and did not accept him.Later when he saved the people from the danger of a deadly disease and human invasion, Bodhidharma was worshipped as their savior.Then Bodhidharma stayed their and taught the people of China all his martial arts.And during his death, he accepted the people's wish to be buried in China itself in order to keep their country safe from future hazards.
The fact above and the consequence of what happens if and only if the Chinese people turn sides with those teachings from Bodhivarma towards Bodhivarma's own people is the continuation of the movie.
Thousands of years later,we are introduced to two groups of people.One group are the bad people who wants to start a Bio-war called Operation Red in India by spreading the same deadly virus that had its presence in Bodhidharma period .By doing so, they make millions of people in India get affected by the disease and there is no medicine to cure them yet.And then when the need of something to cure increases, the Chinese Bad guys would demand India billions of money just to give them the medicine it had already made as planned (from the teachings of Bodhidharma ).The other group are the good people, basically a group of five Genetic Engineering students(one of them is our Heroine) along with the descendant of Bodhidharma  (Actor Surya as Arvind, a circus player) .They together fight back the evil and save their country.
The heroine Sruthi Hassan (as Subha,genetic engineering student) finds about Arvind lineage of Bodhidharma  and follows him.The Chinese bad guys send Dong Lee, a Chinese to start Operation Red in India and also to kill Suba from recreating Bodhidharma from Arvind through his DNA.All the three (Arvind, Shuba and Dong Lee) get to meet and every time Dong Lee tries to control some one mind to kill them.Both Suba and Arvind escape ,and finally settle to transform Arvind's DNA to Bodhidharma 's DNA sequence so that Arvind can revive the martial arts through his genes in order to stop the spreading virus and to kill Dong Lee.
Again,Dong Lee finds out their hiding place and in the final fight, Arvind transforms himself into Bodhidharma and kills Dong Lee and saves his country.The movie ends with a final note from Surya about the revival of our cultures through reading History and passing out to our generations. The Actors and the directors did justice to the movie and I had a satisfied feeling of watching something worth.As for the songs, the starting Ringa Ringa song was very nice and others could have been better .After a long time, this movie was something that made the Tamil people proud of what they were and also made them to think of how they got to be. Don't get surprised if you google about Bodhidharma after watching this movie :)

Over all Rating : **** (Four stars) for reviving the ancient culture and giving out a good message