Info Post
Uma Anandane
December 15, 2011
No Comment
Under French rule in Pondicherry India, there were people who have been noticed for their outstanding services or achievements in their respective professions/works and were given prestigious awards known as Legion d'honneur (Legion of Honour), a top honour in France. One among them who received such an honour was Late Sir. Virappin Waradarassou (Varadha Veerappan) of Pondicherry (the once French colony) is my grand-dad. No one might have come across this name today but he was one of the most important person who was responsible to initiate the growth of education system in Pondicherry. I am proud of my grand-dad and being a blogger, it is fair that I write something about his accomplishments in my blog to let preserve what I can.

Born on 12th June 1906, Late. Sir. Virappin Waradarassou was proficient in Tamil, English and French languages. He has achieved many honours in his profession while working in the department of medicine as drug specialist in Pondicherry Government Hospital. Under French rule in Pondicherry (now Puducherry), he was accorded the Grande Chancellerie de la Légion d'Honneur  and Officier de l'Etoile d'Anjouan for his outstanding works.

It my family's honour to see his name entered in the name "List of foreign recipients of the Légion d'Honneur by country ".

The Order of the Star of Anjouan (Officier de l'Etoile d'Anjouan) or order of France Overseas (from 1950) is a French colonial honorary order which was authorized and recognized by the French Government.

As you can see by enlarging the certificate, this honor was given to my grandfather "Virappin Waradarassou" and registered on 24 Mars 1954 by the French Government. He was a well-educated person in Tamil Literature including Illakkiyam, Anmigam and Sarithiram. His love for Tamil literature has lead him to support the development of Education (Kalvi Kayagam) in Pondicherry. He has even a written few Tamil novels under the French rule. He died on May 5, 1982 under heart attack. Below, is a snippet from Agni 12 written by Dr. BalaBaskaran. 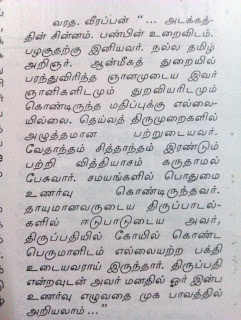 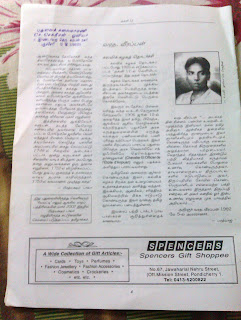 I along with my siblings and cousins are proud to carry this honor to this generation by what we could :) . More details of these honors can be found on the French Official Site - Legionhonneur.fr