Info Post
Uma Anandane
April 21, 2012
No Comment
The Earth day  (or) a Billion Acts of Green is the biggest environmental  green campaign started on 1970 celebrated in  more than 175 countries worldwide.This year it mark on April 22 ,2011 paving way to enormousness outpouring of support both Online and Offline.The Billion Acts of Green campaign continues this year and more at the same date April 22, 2012 encouraging people to live along with Nature.

What do you do on this day ?You can start your own Earth Day Event or join the group who creates one.The Events can be your own (or)
Plant Trees in group,
Reduce your Power intake at home,
Reduce your Carbon prints,
Walk - dont drive on your Car ,
Use Public Transport
Use Lead/CLF bulbs at home
Encourage use of SOLAR Power
Learn about the FREE ENERGY RESOURCES
Recycle Recycle Recycle
Start your own club with friends and volunteers, and do what you want to save the environment.

My offer for this Earth Day 2012 is the below post: AWARENESS of Free resources of Energy through this blog to those interested .I have blogged about few interesting things for a better Earth that I have come across in the Web recently

Earth Day Network announced plans for the Mobilize the Earth™rally on the National Mall in Washington, D.C  on April 22nd, 2012 on Sunday.Special appearances by Cheap Trick, Dave Mason, Kicking Daisies and The Explorers Club. The entire rally will be streamed live on the web at www.earthday.org.

What's special about this rally? The rally will include an “EcoVillage” with dozens of interactive exhibits, including renewable energy demonstrations, educational workshops and voter registration sponsorsed by Bridgestone Americas Tire Operations, LLC, and Best Western International.Exhibitors include NASA, the United Nations Environment Programme, Vietnam Veterans of America, the Yasuni Initiative / Embassy of Ecuador, Kids vs. Global Warming, Tremont Electric, Solar City, and Interfaith Moral Action on Climate Change.After the billion of voices heard and reached, Earthday.org takes them to UN Earth Summit in Rio this year  and help to Mobilize the Earth

I chose Disney Store for this topic because like everyone I love Disney's products and store.It is my fantasy store .Now, to our story. Disney Store has their own pledge of Earth day named " Project Green -Friends for Change " to make a positive impact on people by providong then information, tools, encouragement  in their website.If you are registered with Disney ,you can choose options from checklist  and pledge to do it .You can do an Earth day shop to celebrate Eco friendly selections from them - the organic Tees,Mugs,Bottles and Bags.One interesting point is that you can track where your organic shirt came from by taking the special code from your shirt  and entering them in their website TrackMyT . 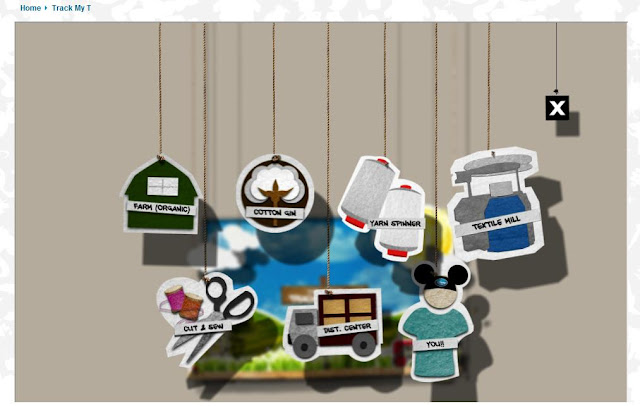 TrackMyT Link : Journey of your Shirt

The animations of the TrackMyT is fun and lets you know birth of your Shirt.Well,I should say here that after the animation video , your shirt then becomes a special one for you.You will never ever make them dirty ;) .If you dont have the unique code,dont worry .You can select the random option and enjoy your tour.Recommended for All .

Note : If you have a great idea in hand and want to propose a project for change in your community ,you can  apply for a grant to help make that project a reality.

I have already blogged in detail of about "What is Solar Energy and How does it work ?" and also about some few companies that offers Free solar panels too.Now, extending that further is my below writings

Solar Panels are being used as a medium to generate electricity (see the link for more details) in offices, homes and corporate sectors. The price is being reduced with days and yet does not acheive a standard in which a common man can buy it.Then came the flexible solar panels that can help you charge your car battery /phone /ipod and sales at a price of US$141.95.Other afforadable forms generate low power that helps to ignite garden like solar lamps and bulbs (from one pound ) but generate very low power that lasts few hours or so. 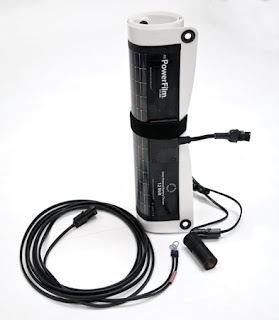 Educational Solar Kits [US $105.50] designed specifically to help people who are new to solar energy long with all you need to create your own Solar Energy - Link www.solarpower-mart.com

Solar energy resource is still a hot topic and more reseaches are going on .One of the invention is "You can print the solar cell just like you do with any other documents in a inkjet / printer".Portable,easy to use and viral ,it brings in a new revolution of Solar Energy .Dr.Karen Gleasen ,leader of the research team at MIT invented a way to print the solar cells in paper .It uses a revolnizing technology  to produce an array of colored rectangles on paper substrate with  Vapor printed electrode which holds a solar cells .The paper could be coated with standard lamination materials, to protect it from the elements for outdoor use.[More details at http://web.mit.edu/]

Yet another breakthrough is that The Institute for Print and Media Technology at Chemnitz University of Technology has developed photovoltaic panels that can be printed on standard paper.(Link -http://www.plusplasticelectronics.com ) 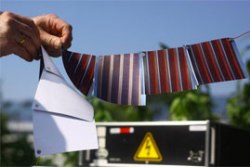 Solar Printer:
Using heat energy from the sun itself, this little printer uses the tanning process to print stuff on paper, instead of using the typical ink cartridges,an eco-friendly way to printing and documenting.Named as Tanning paper ,this little machine tans the paper in three steps therby giving you a professional printed paper. 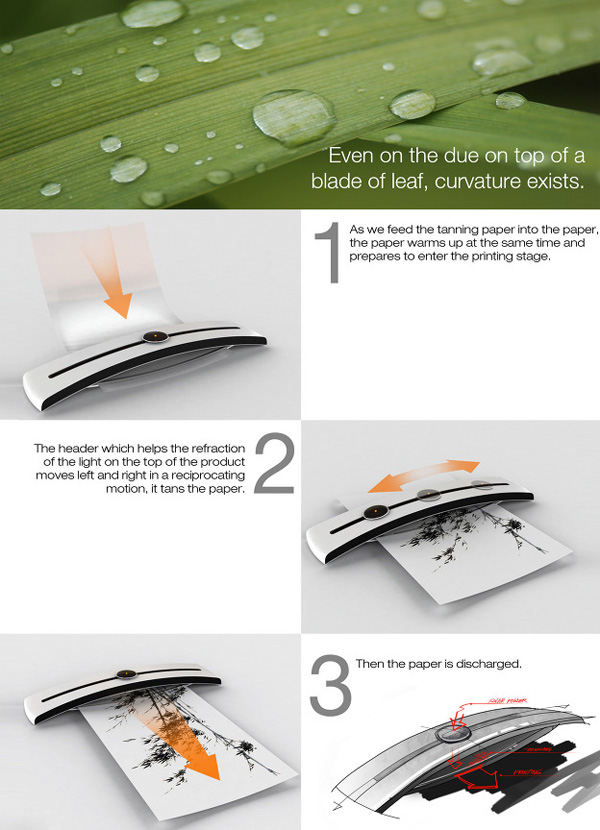 Artwork your own Solar Print
You can print your own design and artwork using Solar Print paper available in Toy storesThe paper is sunlight-sensitive and so, you just lay it down in the bright sun with the objects on top for a moment or two. Then you  dunk the exposed paper in some water to set the print, let it dry and frame it. To get one ,google for Solar kits near your locality.


This person made me enlightened with a world of possibilities and has been a hot topic for me these days.He provoked me to write this post, make tweets and also made me watch every YouTube on the same. Dr.Nicola Telson - his findings on Universal Abundant of Free Energy Resources.

"Electricity power is everywhere present in unlimited quantities,it can drive the world's machinery without the need of Coal,Oil,Gas or any other machinery"-Nicola Tesla


He pictured the sun as an immense ball of electricity, positively charged with a potential of some 200 billion volts.The earth, on the other hand, is charged with negative electricity. In between the two, there is tremendous electrical force what is as called cosmic energy. The one energy that is always present though varied with time and season.

Nicola Tesla - The positive particles are stopped at the ionosphere, and between it and the negative charges in the ground, there is a large difference of voltage - something on the order of 360,000 volts. The region between the ground and the edge of space traps a great deal of energy.But, despite the large size of the planet, it is electrically charged like a capacitor. Keeping positive and negative charges apart by using the air as an insulator.This means that the Earth is surrounded by a Vast Pool of Energy - and we can use it for FREE!

Companies like RCA have been working on ways to harness the radio waves that are floating all around us.  The company’s Airnergy was shown off at CES 2010, touting its ability to charge any USB-equipped device by tapping into ambeint Wi-Fi signals in our homes and offices. 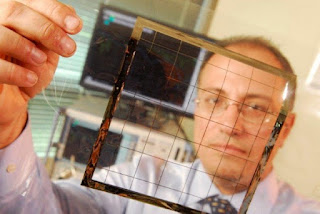 A group at the Georgia Instititue of Technology has taken this concept a bit further, developing power-harvesting antennas that are capable of tuning in to signals from FM radio all the way up to the same Wi-Fi signals used by the Airnergy.The power produced by this antenna is very small about one milliwatt. and is working to improve at a fast pace.
Magnetic Revolution
Telson's invention does not stop with this.Many of the greatest inventions have been suppressed in the past due of greed for money and power.Another powerful invention of Telson was A motor run solely by magnets in 1905.

UFO's flying Spacecraft /Flying Disc
Dr.Nicola Telson had the vision of bring this flying machine to reality 100 of years before.Can you imagine it?He already planned such a flying machine

“The flying machine of the future—my flying machine—will be heavier than air, but it will not be an aeroplane. It will have no wings. It will be substantial, solid, stable. You cannot have a stable airplane. The gyroscope can never be successfully applied to the airplane, for it would give a stability that would result in the machine being torn to pieces by the wind, just as the unprotected aeroplane on the ground is torn to pieces by a high wind.

“My flying machine will have neither wings nor propellers. You might see it on the ground and you would never guess that it was a flying machine. Yet it will be able to move at will through the air in any direction with perfect safety, higher speeds than have yet been reached, regardless of weather and oblivious of “holes in the air” or downward currents. It will ascend in such currents if desired. It can remain absolutely stationary in the air, even in a wind, for great length of time. Its lifting power will not depend upon any such delicate devices as the bird has to employ, but upon positive mechanical action.”

Click for his Details of his proposal at http://www.tfcbooks.com/mall/more/335te.htm


We all have the knowledge , the resources and the great minds like Telson's patented inventions of the same but we cannot get a break through in this invention utilizing it as a whole for a conman man use.The Government (so called Politics) and big companies( already minting money from commoners) wont let this happen.But we got one hope.This inventions is no longer a secrecy that has been suppressed through years.Through the viral media of Social networking and Internet , people have started to gain knowledge of this Free resources available and are ready to plans and invest more.

Finally, I am astonished about how the same five elements of nature :WIND ,FIRE,WATER,EARTH AND SKY  which have been all around us for billion of years are the one which generates us our FREE RESOURCES OF ENERGY .