Info Post
Uma Anandane
June 11, 2012
1 comments
Thanks to the Mayan Calender , it started out this topic and still  worse the climatic changes  and sudden decline in many species , Global warming , natural disasters (frequent than decades ago ) and Fear brought this topic under scanner to experts  in many fields and common people who have their own search and conclusion  of what to expect to happen in 21,December 2012

The Mayan calender is nothing more that a completion of the 27,000 cycle of the Earth going through the 12 Zodiac signs.

Having researched the Internet dossiers , websites of NASA and others and viewing a lot of videos in You Tube on the same, here I put them all in this post to know the other prophesies that connect with the above date 21,December 2012  .Before proceeding further , Good News is No Doomsday !

ORIGIN OF THE UNIVERSE

Big -Bang Theory of existence of Universe :
A tremendous explosion started the expansion of the universe about 15 billion years ago from a single point called as gravitons that contained all the matter and energy of space.This is not a conventional explosion but rather an event filling all of space with all of the particles of the embryonic universe rushing away from each other , expanding continuously every day as said by Edwin Hubble .

So , the universe originates, derives and evolves from this energy-mass dualism which is possible and probable due to the small size of the gravitons whose force is the gravity ,the force exerted between mass formats.Simple said, it is the progeny of the gravitons evolution or say the natural selection of masses because some of the mass formats attaining temporary augmented energy constraint in their successive generations, with energy drained from other mass formats, to temporarily postpone, survive, the reversion of their own constitutional mass to the pool of cosmic energy fueling the galactic clusters expansion set in motion by the Big Bang.

Evolution of Life in Earth
Earth life started before Human evolved .The animals, birds , insects , plants , trees and sea life  are the product of evolution .Life on Earth is just another mass format , a self-replicating mass format , a mode of evolution, natural selection.Life evolved on Earth with the natural selection of the smallest base primal units RNA , a complex molecule made of repeating units of thousands of smaller molecules called nucleotides that link together in very specific, patterned ways and through spontaneous generations .

DNA on the other hand carries the genetic sequence for advanced organisms .

"One of the greatest challenges in astrobiology is understanding how life began on Earth billions of years ago when the environment was very different than it is today,"said Carl Pilcher, director of the Astrobiology Institute at NASA’s Ames Research Center Moffett Field, Calif."This study shows us how conditions on early Earth may have been conducive to the development of life."


There is considerable evidence that the evolution of life passed through an early stage when RNA played a more central role, doing the jobs of DNA and protein before they appeared. During that time, more than three billion years ago, the environment lacked oxygen but had lots of available iron.
- from NASA

So we see that , there is a certain transformation of cells and life forms that is being existed millions of years ago and continuing till now.Humans which never existed million years ago is now the main species of the Earth .Dinosaurs which existed long before is none to be found now.New species appears on Earth and older  species are extinct .

Law Of One
Humans are evolving to higher density forms and in the verge of moving from 3rd density to the 4th density forms.  Not only Humans , the Earth and the whole Universe incurs this transformation of Energy .The Earth has already ticked off its clock and moving towards the higher energy which has caused the polar shifts and other climatic changes.The Human Life forms should be in their fourth density in the Year 2013 according to calculations of spiritual experts .

Fourth Density
The Life forms on Earth mainly Humans would have a single stream of Thought vibrations .The Law of One - understanding the basis of life and Love ,which is the force that drives the life form.

This opens a door to a new spiritual awakening  , a new thought form , a new era of life .This door is laid ahead of us , not long but in December 2012 . A Transformation awaits us - either your whole self or only your thoughts and that's how EARTH works - expanding outwards and continuous for trillions and trillions of years .

YUGA - as per the Wiki Sources
In Hindu philosophy ,Yuga is the name of an 'epoch' or 'era' within a cycle of four ages namely the Satya Yuga, the Treta Yuga, the Dvapara Yuga, and finally the Kali Yuga .According to Hindu cosmology, life in the universe is created, destroyed once every 4.1 to 8.2 billion years, which is one full day (day and night) for Brahma. Like Summer, Spring, Winter and Autumn, each yuga involves stages or gradual changes which the earth and the consciousness of mankind goes through as a whole. A complete yuga cycle from a high Golden Age of enlightenment to a Dark Age and back again is said to be caused by the solar system's motion around another star .

Lord Vishnu has many avatars and in each yuga, he has revealed all of them except-the last avatar(tenth)-Kalki. This avatar will be seated in a white horse with a drawn sword blazing like a comet.

The ages see a gradual decline of dharma, wisdom, knowledge, intellectual capability, life span, emotional and physical strength.
Quoting from The Holy Science, Sri Yukteswar states that our sun revolves round a grand center called Vishnunabhi, which is the seat of the creative power, Brahma, the universal magnetism. Brahma regulates dharma, the mental virtue of the internal world. Sri Yukteswar states: ...the sun, with its planets and their moons, takes some star for its dual and revolves round it in about 24,000 years of our earth.... Essentially, When the sun in its revolution round its dual comes to the place nearest to this grand center, the seat of Brahma...the mental virtue, becomes so much developed that man can easily comprehend all, even the mysteries of Spirit." Further, ...when the sun goes to the place in its orbit which is farthest from Brahma, the grand center...the mental virtue, comes to such a reduced state that man cannot grasp anything beyond the gross material creation. Paramahansa Yogananda, devotee of Sri Yukteswar, dates his forward in the book as 249 Dwapara (1949 AD). The period of 2400 years during which the sun passes through the 2/20th portion of its orbit is called Dwapara Yuga. Dharma, the mental virtue, is then in the second stage of development and is but half complete; the human intellect can then comprehend the fine matters of electricity and their attributes which are the creating principles of the external world. [Source Wiki Yuga ]

To add more essence , Sri Yukteswar’s introduction to The Holy Science includes his explanation of the Yuga Cycle – revolutionary because of his premise that the earth is now in the age of Dwapara Yuga, not the Kali Yuga that most Indian pundits believe to be the current age - know more [Spiritual Teachings-Clarity Magazine] 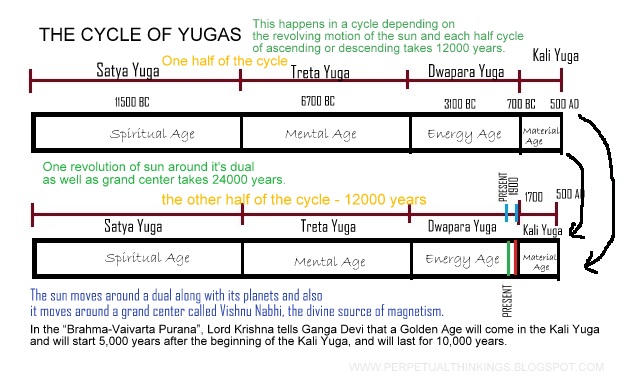 The spiritual importance of our changing relationship to the Great Center is elucidated prosaically by Norelli-Bachelet:

. . . at this time, we are given the means whereby we can know the so-called esoteric truth of our System and its evolution, and the part the Earth plays therein, as well as each of its inhabitants. We can go so far as to know that there is a great Centre to which we in our System are related and which determines our course, because it is this Centre that finally holds the key to the Precession of the Equinoxes. It is this Centre that makes of the axis Capricorn and Cancer the Evolutionary Axis of our planet. And through our study we can know that in ourselves, in our very bodies, we can find the exact reproduction of this Galaxy which then gives us the revelation of the Supreme Herself


According to their teachings, we have recently passed through the low ebb in that cycle and are moving forward to a higher age — an Energy Age that will revolutionize the world. They declared that we would live in a time of great social and spiritual change, and that much of what we believe to be fixed and true — our entire way of looking at the world — would ultimately be transformed and uplifted.

Isaac Newton was deeply fascinated with Biblical prophecy, and did in fact make a prediction of an "end of the world"14 for a date not before 2060,and not in 2012. The context of his ‘prediction’ is interesting in that he was adamantly against ‘date setting’ with regard to biblical prophesy157.3g, folio 13 verso:

So then the time times & half a time are 42 months or 1260 days or three years & an half, recconing twelve months to a yeare & 30 days to a month as was done in the Calendar of the primitive year. And the days of short lived Beasts being put for the years of lived [sic] kingdoms, the period of 1260 days, if dated from the complete conquest of the three kings A.C. 800, will end A.C. 2060. It may end later, but I see no reason for its ending sooner. This I mention not to assert when the time of the end shall be, but to put a stop to the rash conjectures of fancifull men who are frequently predicting the time of the end, & by doing so bring the sacred prophesies into discredit as often as their predictions fail. Christ comes as a thief in the night, & it is not for us to know the times & seasons wch God hath put into his own breast. [9][10]

Newton's prediction and calculations were inherently anti-catholic, as he considered the the beginning point of his year count to be 800 AD, as the starting date of "the Pope's supremacy". That is the year Charlemagne was crowned emperor of Rome in the west by Pope Leo III at St. Peter's in Rome. Newton considered that date to be the establishment of the "apostate church".

Conclusion
The December 21,2012 may lead to many theories and in fact enlighten as to what and why things happen and their relative results.One , with the planetary alignment in place ( see Real 2012 ) what we may expect that we are witnessing a new change either as said by lifting to Fourth dimension or by the quoting in Holy Science and 21, December 2012 would be just like another day with its own ups and down as Human witnessed in early days, the only change being we are expanding our search for knowledge.NO DOOMSDAY , JUST ANOTHER DAY!


Wish you all a very happy and prosperous New Year 2013 ! 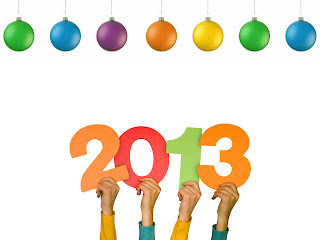