Info Post
Uma Anandane
June 07, 2013
12 comments
Growing Hairs are good on head but when the same happens on hands and feet, it's just a door  to mess. Unfortunately, I fall into the latter and so I use Veet cream or salon waxing to get rid of those unwanted hairs in the past. And you know what happens next - the hairs never stop growing. They reappeared again right after two months. Also, I found that Salon waxing is not affordable always but had better results when compared to creams and razors.

Recently, I was offered to review Veet Easy Wax Electrical Roll-On Kit and I took the chance to clean up the titbits of hairs on my arms and legs. 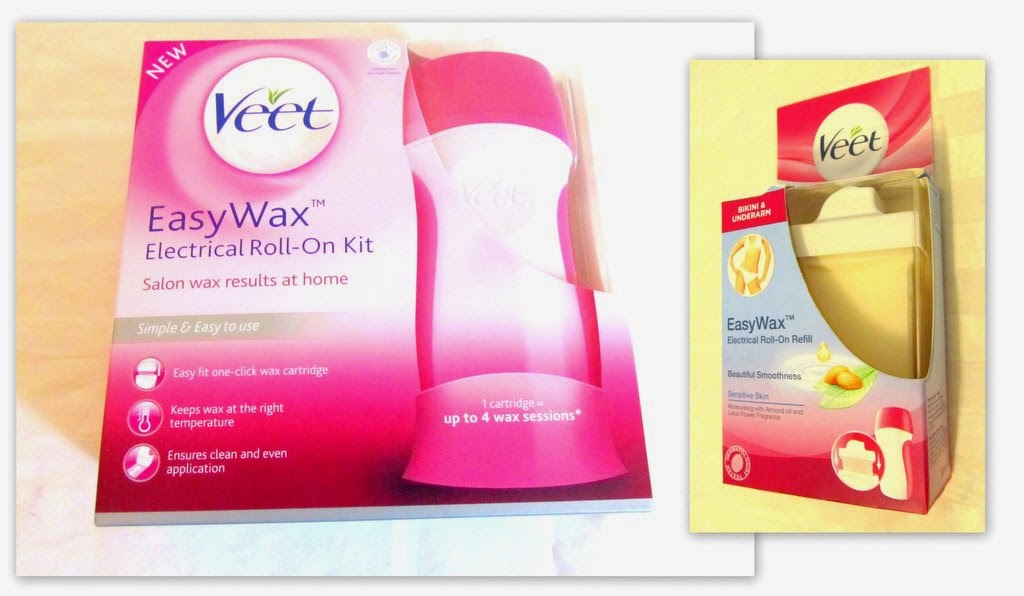 New Veet Easy Wax packaging was great and the kit included two sets of Veet easy wax roll on refills : a large box that had the wax refill for arms/legs hairs and a small box with wax refill for the bikini and the underarm hairs.

Large box contents (as shown in the image)
The pink wax refill in the Veet Easy Wax Electrical Roll -On box is designed to remove hairs from legs and arms. 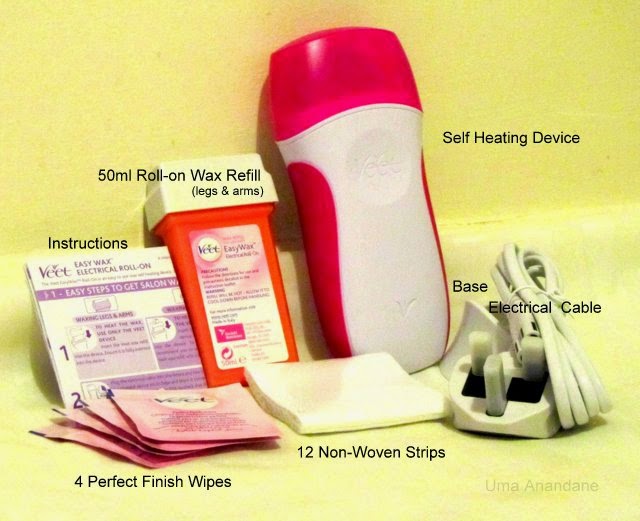 Small box contents (as shown in the image)
The white wax refill in the Veet Easy Wax Electrical Roll -On box is designed to remove hairs from bikini areas and underarms. 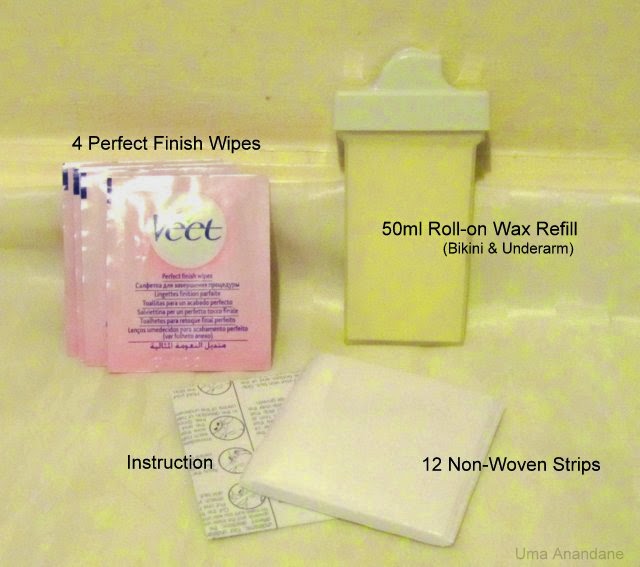 Instructions: Always read the instructions before use . To start waxing the hairs from the arms and legs, insert the pink wax refill into the self heating device as shown in the below image. Make sure that you fully insert the refill before heating. Additionally keep a waxing strip and  a veet perfect finish wipe ready. 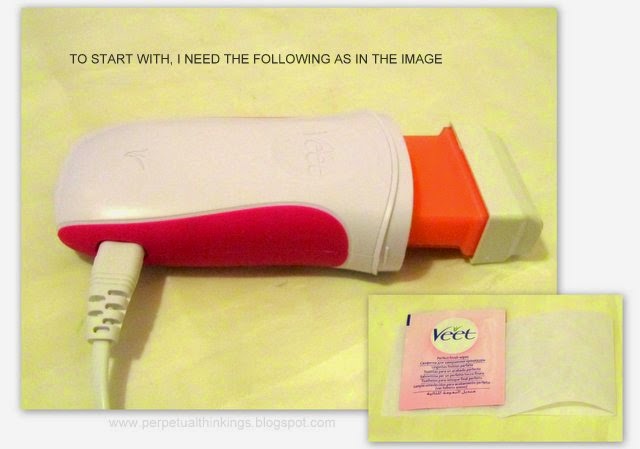 Heating Time : After slotting the wax refill fully into the roll on device, charge the device using the given electric wire . The time as I noted was more than the time that was mentioned  on the pack (20 mins). I allowed the wax to heat more than 40 min until I felt that the wax was smooth enough to glide my skin. 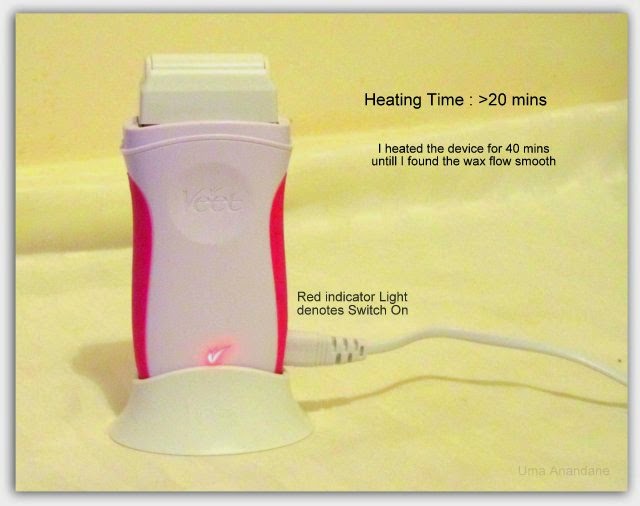 The Roll-On Device : I  checked the flow of the wax by rolling the device over a small area on my skin. When the wax it ready, you will find that it is easy to roll and also the wax spreads evenly. Always apply the wax in the direction from top to bottom (elbow to wrist or knee to ankle).

Note: But don't leave it to cool for a long time between other waxings since the wax is prone to thickening if not warm . And so , I did reheat it whenever necessary. I also found that it was not that hot even if I leave it to heat for 45 mins. So, I personally felt safe when using the device which is a great plus for me.

Wax Strips : It can be used on both sides. And I did use both ways in the start and found it became very messy. So I stuck with using only one side of the Veet strip and it worked well . No more messy!

You can use each wax strip around 4 -5 times depending on the area covered by the strips. One major issue is that I found that 12 strips was not enough for both my legs and my arms. So, I took few strips from the other pack (the second small kit).

Application: Keep the slanted side of the roller over the hairs on the skin and apply the pink wax over your arm. Then, place one non-woven strip over the pink wax and press it leaving a little piece of strip without covering the wax (to make it easy to pull off). Now, quickly pull the strip in the backward direction (from wrist to elbow). You should find the hairs removed.

Check : In case if the hairs aren't removed as expected, check whether the wax is warm enough for the hairs- strip bonding or check how quick enough you pulled the strips. These were the two things I did to make sure my hairs were removed.

Glitch: Works remarkably well for smaller hairs on my arms since I had done some waxing few weeks ago. For longer hairs on my legs (haven't waxed for months), it was painful for me. Yet with some help at hand, I managed it without much pain.

Veet Perfect Finish Wipes: It was a savior. It cleaned off the titbits of waxes from the legs and arms that stuck to the skin. The fragrance was good and the oiliness from the wipes gave a shiny look to the skin.

Disclosure : I received the above product free from Veet for the purpose of a written review. No monetary gain obtained. All opinions are my own written only after trying and testing the above product.