Info Post
Uma Anandane
December 31, 2013
32 comments
Decades back, I remember seeing my grandma sitting near the gate on the evening times (the time when there were no Television serials 24x7) and talking to passers-by. Some voluntarily come and some are invited by my grandma to sit and chat with her. They talk about various subjects from family problems, to cinema, politics, government and ration card products. This one to two hours spend outside in the evening by my grandma made her an informational portal for current happenings in our surrounding place. From her, regarding the politics topic we knew which political party is coming to visit the town for promoting their party, what promises were kept by the parties, who is going to elect whom, when and where does the voting start and whether the voting center is crowed or not. It all worked like the word-of-mouth marketing for the general elections.

But the world has changed now. People to people conversations have declined and people to machine conversation have increased among today's people especially among the youth. Almost every home (esp. with the youth) has either a mobile phone (android or apple), tablet, desktop PC, laptop or any combination of all these. And all these gadgets will definitely have social mobile apps. With these apps, youngsters and adults connect with the outside world for receiving or passing  information. It's no doubt that these social mobile apps have replaced our old granny's mouth.

With changing mindset of youngsters in the new era of technology and unfulfilled expectations which were promised by the political party candidates, makes an India's youth hesitate to vote. Some even don't take voting seriously and so vote blindly for some random candidate without knowing the party's strength or weakness. So to increase the awareness and importance of voting among India's youth for the coming Indian General Elections 2014, this post will analyse the use of social mobile apps as a supportive medium.

The current use of technology announced on January 2103 by the Election Commission of India is the use of COMET (Communication Plan for Election) which would send SMS based alert system regarding polling, percentage of voting, scheduled events regarding staffs and mock polls, security and so on.

Apart from the already in use Electronic Voting Machine (EVMs), let's analyse other effective methods making the best use of social apps that can improvise and revolutionize Indian election.

The first and foremost important point is to design a solution that makes people to access votes from anywhere. The idea is that one should develop a robust electronic system for voting which adapts itself to the needs of people, designed in such a way that even the granny who does not know how to access technology is still able to cast her vote (which should be kept private). Also, by using social media he or she can share a message like " I have voted! " or "I am a responsible citizen" to the mass media which attracts and encourages a lot of people to come forward to vote.

The making of the system should be stronger with no loop holes,
The above two will help making security measures stronger which might solve vote frauds or missing votes.

EXPLANATION
When an individual chooses to vote through a social app, the information regarding his/her voters ID and secure password is entered through a gateway for voting called as "Voters ID Gateway" similar to SBI/HSBC/ICICI bank account or Paypal. Then she/he is taken to a page where the political parties name and candidate names along with their symbol are displayed. The individual then can cast his vote for whichever candidate she/he likes and submit his entry. Finally, you get points (voter's points/reward points) which will be added to that person's electronic voter ID card (these reward points will engage more people to vote). Also by sharing to social media you are entitled to get additional points. All these points can be transferred into vouchers or can be accumulated for other discounts / beneficial needs from the Government. This implementation also encourages Indian people working in foreign countries to vote through social apps. Personally I feel that this idea of hassle free voting and collecting points from voting will get a lot of attention from Indian youths and thereby make Indian General Elections 2014 a huge success.

For those people who love voting going to the polling booth, an app designed especially to find the nearest ATM with polling facility using Google Maps is highly helpful.


CONCEPT
Create connections with verified banks with ATM availability. Let the banks enable a feature called "General Election" in their ATM software (updated as per requirements). On the day of the election, let all Banks with trustworthy connection with the Government enable this feature called "General Election" in all their ATM machines in all available cities in India.


People can use social apps to find their nearest ATM which provides this facility and come their to vote. They can use their ATM cards, choose the feature "General Election" which asks for their unique ID (National ID/Aadhaar unique ID/ Biometric authenticated ID) to enter into the portal of Government of India wherein the individual can select his/her favorite party and cast their vote, get receipt of successful voting with allocated reward points which can added as reward points in their respective bank accounts. Even the members of the family who does not have a valid bank account can still use this feature with their respective family (head of the family) bank account, enter their own unique ID and still cast their vote. The reward points accumulated will be added to that particular bank account for every member of the family who votes thereby encouraging more participation. This provides fast, secure and reliable voting mechanism.

Send inspiring messages that motivate youngsters to vote. Voting is not of pits and holes but a solid destination that determines the future of India

In the same manner, interested political parties can start their own WeChat account in delivering informative messages creating a social presence of their party. Through this medium, general public can directly get in touch with the political party (directly or through a middle man) and get feedback for their queries. A smooth interaction between the political party and general public can help in noticing important problems that need urgent attention and help serve the general public in the right way. It will also help eliminate unwanted theft in between (like Government money spent for renovating houses of poor, free products for the poor, etc)  and make sure that the help has reached the public.

TIP 2- Use Group Chat Feature for Live Feeds
Make use of Group Chat feature in WeChat to invite members into your community who are interested in volunteering for to spread the importance of an Indian youth need to vote and also for the future updates on the party that has won. Save group chat as a contact and each member in the group can help spread the live feeds that they receive from the Chat group through powerful social networks like Face Book, Twitter and so on.

By following members of the group "VoteIndia14" (WeChat ID - VoteIndia14), general public can get live feeds on General Elections and also after the election, we can get feeds on what is happening and plans that are being constructed for the good of the people. Ideas and concepts can be shared for the improvement of the lifestyle of the public through the members of the "VoteIndia14" group directly to the concerned party. By doing so, we are creating a powerful media link between the party members and the general public which will benefit the India as a whole.

Also by using these features, updates on the nearest voting center (or ATM with polling facility), opening and closing time of voting center, to inform crowded or vacant nearby centers for voting, etc. can be send in minutes by the presence of our volunteer or interested members to the general people in that city.  It is really good that we can add up to 100 people on the latest version of WeChat Download 5.1 version and when each member starts tweeting and sharing, the news will start increasing exponentially.

Example
One friend who lives nearby a voting center can starts a Live Chat session informing his friends that the crowd is less and it will be a good time to come. An  invitation message will be sent to the group chat's members automatically and those members who are in the live chat will hear the message immediately. They in turn can inform the same to his other close friends in the same manner.

You can encourage your friend to vote through messages (like the one in above image) that remind him the importance of voting in the General Election.

TIP 4 - Watch Live Motivational Speech by our Leaders from Anywhere
Use Web Chat from PC for live chats and updates. There might be some people who might use other chat apps or don't have access to their own mobile chat apps. Invite them for a Web Chat to join in the conversation. The conversation might be about the political parties, their live speech or information regarding the importance of voting.

Just Scan the QR Code that shows up when you open your PC browser to web.wechat.com, then select "OK" for to #WeChat on PC.

Watch your future leader's speech, know their areas of strength and the core message being said. Remember years back Senator. Barack Obama's popularity rose with his motivational speech of hope, courage, unity and change on his "presidential campaign" which made him the first African American President of America (even now). 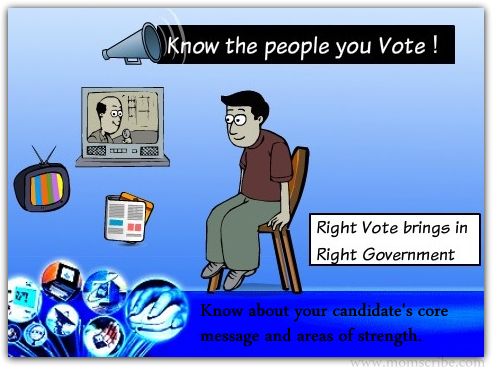 TIP 5- Spread the Message by All Means
This one is for Random Strangers. When a feature is available, there is nothing wrong in using the same for something good. Well, I am talking about the "DRIFT BOTTLE"- read more on this here

In your WeChat account, enable Drift Bottle from "Settings" and use it to throw text or voice messages  to some random people who might pick up the bottle and read your message [winks]

With robust Creation, Implementation and Promotion using social mobile apps like WeChat, we can definitely inspire and mobilize the India's Youth to Vote.

Update: I am happy to announce that this post has won the grand prize in the Wechat-Indiblogger contest.