She really loved to draw sketches and some of them were really awe-inspiring. Then he came across a particular sketch and his face turned pale. He was shocked to see this in the sketchbook of little Roohi. He thanked God for if Tara would have seen that sketch, she might just have known more than he wanted her to. He tore the page and kept it in his pocket (Read the previous part of Round 2 here: Why should I be good?) 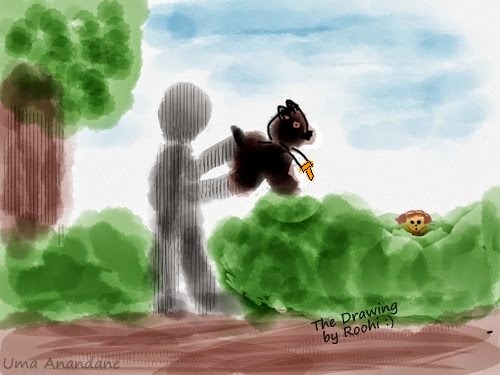 Especially when he noticed a sharp razor as an accessory clinging onto the toy's neck. It was not something a little child would draw all by herself. Above all, Cyrus was familiar about the razor symbol. He has seen such symbol in existence when he was working on his assignment.

He recalled the incident back in court.

The court hearing was cleverly terminated by Samantha by provoking the judge that a law student who is still in college has no rights to practice criminal law. Cyrus was disheartened to see that Samantha’s master plan worked so well that he could not even find any trusted lawyers who would stand by his side and support him to carry forward the case.

All his works seemed vain. He has worked so hard to collect information regarding the case in spite of the risks involved. He had even gone one step further in getting a special permission from his dean to proceed with the case with the right help. But, he too backed off supporting Samantha’s claim, saying that the clues Cyrus collected were just mere information and the forensic report he presented as proof leads nowhere close to the case that he worked on.

“The proof that I have in my hand would support my verdict in this case. But before that I would need someone intelligent and honest enough to come forward and help me out. But, who could I request? And who is brave enough to stand against the 'power' lady?” Cyrus mind started to replay the voice he heard days back.

“Sir, our tests suggests that the piece of white coat should be laboratory coat and the needle is a surgical needle. There were tiny bits of dried blood stains in the needle and in the lab coat which we found to be one and the same. Moreover, through Serology and DNA analysis, we found that the stains belonged to a mammal like adult dogs or cats which has been heavily drugged.”

The voice of the lab technician kept ringing in his ears.

There were more unanswered questions to which Cyrus is desperately searching for answers.

“To whom exactly the forensic report points to and why drug a poor animal? Do Monday nights incidents have any significant role to play in his case study? What about Prof.Paresh?”
“The razor symbol is too uncanny a proof to represent as a weapon. If that is so, why give a toy representing that symbol to a child like little Roohi and for what purpose?”
“Does the razor symbol in the drawing has something to do with the razor clue that I retrieved on one of the Delhi murder case?”

Cyrus was mulling over his thoughts. He closed his eyes, trying to recall a blurred vision of the lady holding a razor in her hand in the Chuna Mandi house. He was not sure whether it was a reality or his imagination. He felt a slight pain in his once wounded head. He felt burdened not knowing the answers to any of his questions.

“Cyrus, are you okay?” asked Tara placing her hand affectionately on Cyrus, who sat staring at the ceiling with his fingers slowly brushing against his hairy chin.

“Well, then pull yourself back and follow me now. I have a good news to share. We are going for a long drive to meet someone important,” she said in an excited voice.

“Shall I join you too?” Jennifer asked, standing near the door.

“Sorry Jennifer. I need you to look after little Roohi,” Tara stressed. “She looked a little disturbed last night. Also, I guess it will be better if both Cyrus and I go first. Please understand,” requested Tara.

“Alright then, I can leisurely spend my time admiring the works from Mr. Writers’ blog.Who knows, I might stumble upon some love poems too,” she replied looking miffed.

Cyrus looked at Jennifer. Her childlike way and emotions made him smile. And he can affirm that his love for her grew stronger every day. “Ah! What would my life be without Jennifer? Her beautiful smile ...her dusky complexion and sexy look that she carries in style...she herself is a love poem,” he thought in admiration.

“Blog? Whose blog and who is this Mr. Writer?” Tara’s question interrupted Cyrus thoughts about Jennifer.

“Well, well, Mr. Writer is trying to maintain his anonymous nature to everyone. I thought it was just me who don’t know about his amazing creativity,” Jennifer started pulling Cyrus leg.

Tara looked at Cyrus and questioned, “Is it you Cyrus? Are you a blogger? Oh my, I can’t believe that I have two writers in my home now, including Shekhar. But Shekhar is not a blogger. He loves seeing his writing in prints,” winked Tara.

“Ok Tara, I hope you forgot that you told me that we are to meet someone important today,” said Cyrus with a sudden seriousness in his voice.

In his mind, he was struggling with the drawing done by little Roohi. Shall I show the drawing to Tara? No, not now. She is a sensitive woman and showing her this drawing will make her too concerned about Roohi’s safety.

“Oh yes, the person who we will be seeing today is someone we knew already,” Tara paused. “I guess even Jennifer knew him as a child. He was working as cop before he voluntarily relieved himself of his duty for some personal reasons,” said Tara half lying.

She already knew the truth. Aryan was still working as an undercover cop.

“Aryan! Are you talking about the Mr. Aryan Ahuja, who used to surprise our neighbourhood with his inquisitive mind and sharp eyes? Whoa, what a man he is! He was a man brimming with honesty and sincerity in his works,” recalled Cyrus with a twinkle in his eyes. “You know what? I have written a post in my blog about how I admired him…,” Cyrus went on adding details to Tara's surprise.

Jennifer interrupted, “Well, now I understand why I saw his picture in your blog. By the way, I have already interacted with him when I was with Lallan.”

Cyrus and Tara were looking at Jennifer for answers.

“Me and my team are participating in ‘Game Of Blogs’ at BlogAdda.com. #CelebrateBlogging with us.”