Reconciliation for a New Beginning

Info Post
Uma Anandane
September 17, 2014
11 comments
This post is the final part of the creative writing by Team Maximus Dramaticus who have worked together to bring you some exciting novella which promises to keep you entertained.  Do read the previous part of the story by Titas Kar here "a few clouds cleared".

Tara snatched the phone from him, “Hello, hello, this is Shekhar’s wife, who is this?”

There was some silence on the other end.

“Oh is it you Tara? The posh lady who makes her headlines in the nation’s popular televisions,” the voice on the other end seems to ridicule Tara.

“Yes, it was my responsibility and I am proud of what I do. But, who are you and why do you need to talk to my husband?” questioned the worried Tara.

“Hun hun husband, I see. In a few days time, you will be making headlines with the name of your husband for the world to see…ha ha ha,” Tara heard the lady on the phone roar with laughter.

Tara was taken back when she heard the lady say those words. “What foolishness! Don’t speak anything wrong about my Shekhar?” Tara was boiling inside in fear and love for Shekhar. “... and please tell, is Jennifer with you?” She could have cried not knowing answers to so many questions, but the lady on the other end rescued Tara from at least that pain and said, "Meet me in an hour at hotel Le ROI in Paharganj and ask for Madam S. If you come, Jennifer could be saved and I have secrets about your husband to share with you," she hissed sinisterly through the phone.

Leaving Roohi under the guidance of Cyrus, Tara started to drive towards the destination ordered by Madam. 'Who is this Madam S and what secrets she knows about my husband?' she thought.

On her way driving, memories of the past started haunting Tara. She recalled the episode discussing her findings about Cyrus to Shekhar.

“Look at these pieces of clues left on every Monday night on Cyrus bed, Shekhar,” Tara showed the bits of paper she had collected to her husband looking for his guidance as he was well known for his keen observation to details. Writers are always blessed with one and she strongly believes that statement.

Shekhar took the paper bits from Tara and looked at it closely. Tara could sense a smile on Shekhar’s face and she knew the writer in him will come up with a solid solution. Her belief did not betray her.

He soon took a note and pen from his pocket, scribbled something on it and gave it to Tara. Tara’s face lit up with surprise reading what Shekhar has written. Written on it were the words,

"She can paint a lovely picture
but this story has a twist
her paint brush is a razor
and her canvas is her wrist."

Before Tara could question him, Shekhar answered, “These words are nothing but verses from a book called 'After' by Amy Efaw. Looking closely at these carefully picked rhymes, I sense the killer should have a keen literary sense and has a sort of antipathy towards bitches…”and with those words Shekhar bit his lips tight. His once bright face has now turned pale and firm, all the sudden.

And Tara hasn't failed to notice that change on his face.

She even remembers seeing the same expression on his face when she first told him about her drug findings inside the locked room. And every time she alerted about it, Shekhar was just avoiding further discussion and asked her to wait until the Monday mystery gets solved. 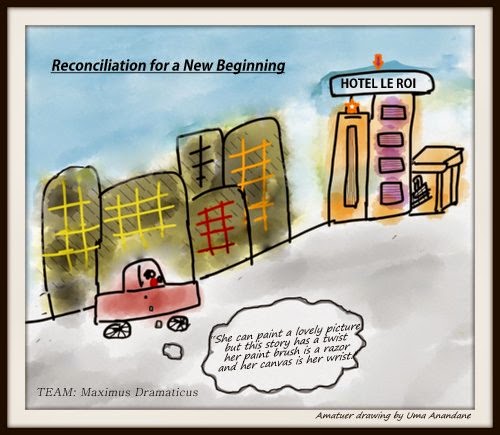 But now everything seemed out of place. Jennifer has been kidnapped, Shekhar has been missing for long and moreover he has been accused of something she could never dare to dream. The Shekhar she had known cannot be someone who has secrets that would make headlines. There should be a way out for my dear Shekhar. If not, I should and will find a way to bring him out safely without harm. Tara made her mind strong to handle the situation.
-----------------

Cyrus was playing hide and seek with Roohi, her most loved game. The mobile in his pocket began to vibrate and ring.

He picked up the call, “Hello, Cyrus here.”
The voice on the other end delivered some important findings about the forensic report Tara and Jennifer has submitted.

Cyrus fell weak kneeling on the floor. He was now even more convinced of the reports reviving those couplets followed by a certain syllable count which had frightened him to death on Monday nights. If what the report has confirmed is true, he has to tell all about the case and his findings to Shekhar and Tara. He decided not to involve the police since he knew how angry was Shekhar when he told him that he called the police without his consent when Jennifer went missing. Shekhar even lied to the police that both girls were safe when they arrived and apologised to them for the trouble caused.

Making up his mind, Cyrus opened his laptop bag and took out his Strontium Jet USB 3.0 32 GB Pen drive. He inserted it in his laptop and started working on the files which he has long saved even without the knowledge of his professor.
-----------------

Percival knew it was coming. He had laid out the plan well enough to trap poor Dutta back to the dark world where he had once escaped.

Shekhar looked troubled. What if his beloved Tara finds out that her husband is a culprit. How could he face her, Cyrus and little Roohi? No, if I agree to Percival’s proposal, I could never come out of this darkness ever again even if I could try. And if I don’t, all Percival could do is to blackmail me about telling my past to Tara.

“Aaahah,” Percival moaned and then continued, "Why taking so long dear friend. Agree to my proposal or else you will repent," Percival rhymed a warning.

Shekhar looked straight into the eyes of the Professor and said, "So, all you need for your business is my house, isn't it Percival? Okay, take it all but under two conditions. If you agree to it, I will transfer my house in Chuna Mandi in your name in two weeks’ time and I will also make sure that Cyrus gets back to Mumbai without a word of the happenings in the house."

Percival twisted his head sideways and looked at Shekhar. He then showed his glimmering canine tooth in gold and said, “Well, well not a bad proposal after all. Promise me your house and I will take your call.”

Shekhar was relived on getting the answer. Shekhar's two conditions of hiding his past forever and relieving him of the sick trade by giving him a little percentage of the house value to convince Tara were the easiest condition to let go for Percival and so he agreed to his fruitful proposal.

Tara was escorted to a 220 sq. ft. premium room with marble flooring. There was only one, but a big window which faced the city main road and by the way it looked, the windows and doors in the hotel room were sound-proof. Not a sound could be heard even if there was a murder happening inside.

Tara was asked to seat in a big sofa facing the queen bed, exquisitely decorated with luxury bed sheets, freshly cleaned and pressed. Just above the bed, she saw a large wooden frame with a portrait of a lady. Tara sensed something odd but familiar in that picture. She was staring long at the woman in the picture.

“Had you noticed anything unfamiliar in that picture?” queried a stern and bold voice standing few paces behind Tara. She was taken back. She turned around to look at a long and lean figure moving gracefully towards the bed. ‘So SHE was Madam S’ thought Tara and she jolted back as if a sudden lightening has struck her.

By the look of her, any man could fall at her feet. She held such elegance and beauty, but only few people like Tara knew that behind those deceptive beauty hides the thirst of money and power that dares to kill anything that hinders her way.
-----------------

Cyrus had done it. In no time, he will get approval and he can safely proceed for what he had been waiting for.

The doorbell rang and Cyrus could hear little Roohi shouting in sheer joy. “Mamma, Mamma you are back home with Jenny aunty”.

Cyrus rushed to the door and saw his dear Jenny tired and worn out. She was still in shock of the happenings on that day. For a moment, Cyrus thought of hugging Jennifer and consoling her that everything is all right. But before he could think, Jennifer came running into his arms crying hard. Cyrus was moved and the man inside him finally woke up to hold Jennifer lovingly and consoled her to stay strong. He then looked at Tara for answers, but she had long gone inside the house without a word.

Cyrus made Jennifer take some rest in his room and went to see Tara, who was looking at the locked doors in despair.

“Tara, I have something to tell you,” Cyrus said.

Tara turned her puffed up face and replied, “I need a help from you Cyrus.”

Cyrus heart sank looking up Tara’s strong face swelled up due to incessant crying. The lady he had thought strong is now standing in front of him, shattered into pieces. Cyrus took a deep breathe, shook his head in approval and said, “Anything for you, but before that I need you to see some information I had found.”

Tara looked at Cyrus files on his laptop. “And if everything succeeds as I have planned, I may get a call tomorrow,” he said to Tara. Tara could see Cyrus in a new form. Something made Tara trust Cyrus’s attitude and words. “Now, tell me what help do you want from me?” asked Cyrus to Tara.

The Delhi High Court was surrounded by popular medias and reporters from everywhere. Cyrus entered the court wearing his long black gown and a white stiff collar with bands looking professional in his advocate dress along with Tara, Jennifer and Shekhar.

“How did you reopen the wrapped Delhi murder case that happened two years ago? “

“They said all vital clues were destroyed, now have you found it by any chance?”

“How did Prof. Paresh Borah get involved in this case?”

“Are there any other suspects in this case other than Prof. Paresh and Lallan who were arrested?”

Reporters from all over were pouring in questions at Cyrus who tried to remain calm. Shekhar too was seen quite but Tara looked a bit nervous. By the look of it, anyone who sees her would say that she is anxiously waiting for someone to arrive.

A BMW black sedan car rushed and halted nearer the entrance of the courtroom. Opening the car’s door came out the 'power' lady dressed in long black gown, clutching tight a renowned black Chloe Paddington handbag and her legs covered with a Metallic Lilac Leg Strapped Sandals. All heads turned towards the elegant lady and there were loud murmurs heard everywhere “ Madame S! Madame S!”

Jenifer turned towards Cyrus and asked who Madam S was. Cyrus replied, “She is Madame Samantha Naik, now the renowned first lady of our honourable Delhi minister. ”

My team and I are participating in ‘Game Of Blogs’ at BlogAdda.com. #CelebrateBlogging with us. The sequel to this round one organised by Blogadda will be continued in round two by my team Maximus Dramaticus, who write to thrill.