Info Post
Uma Anandane
October 01, 2014
3 comments
Samantha, with her clothes in disarray and lipstick smeared in a rather sensual way stood in silence for a few moments before she spluttered, ‘Don J! You’re Don J?’ From somewhere in the darkened room, Lallan said, ‘Oh My God!’ (Continued from Listen to your mind but follow your heart)

Part 1 of Round 3 of Team Maximus Dramaticus


The door to the entrance of the godown in Chuna Mandi witnessed a dark and tall shadow being cast on the ground. Lallan hurried towards the shadow only to see a blurred figure moving past quickly into the darkness. Jennifer pushed aside Lallan and began to chase that figure. Whoever it was seemed to be running quickly through the thick bushes and onto the roads. The roads on the Chuna Mundi looked like series of rows adjoining one another, either towards its end or in the middle and Jennifer saw herself running from one road to another. At no cost, Jennifer has to find out who her  intruder was. With Monday nearing too close, she never expected to be caught red handed with those two criminals who has been toying her around like a puppet. Don J was the identity she created herself to pay back Lallan. In case if she had to, she would end the intruder’s life using the tiny weapon in her hand.

But to her surprise, the road in front of her seemed empty. She was panting for breath and she could feel the sweat drenching her hoodie covering her head. Her eyes quickly scanned the road in front of her. The road seemed unusually calm except for the slight screeching noise of a telephone booth door being slightly opened and wavering in the wind. She strained her eyes to see something odd inside the booth through the dark night and she felt that she saw someone standing inside the telephone booth.

Being sure that the road is still empty, she made quick advances towards the phone booth. On her way, she made sure she had her instrument ready for the attack. It was a Grabhorn pen razor given to her by Lallan. He said her that this razor is not easily found and could trick anyone of a lighter or a pen. He also asked her to keep it with her until he gets them back. That was an order given to her.

As she neared the phone booth closer, to her surprise she saw no humans; but just a shirt hanging down from the phone . 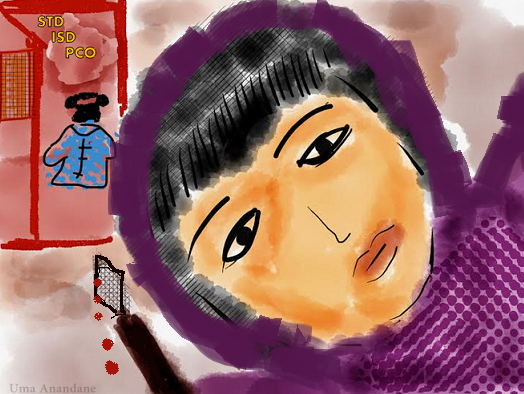 Before she could come to a conclusion, something or someone grabbed her by hands and pushed her towards the phone booth with a strong blow on her face. She saw herself tumbling on the floor inside the booth with her face down along with someone she knew.

But before she could talk more, Cyrus was holding her tight, pulled his shirt back from the phone and tied it over her hands only to see a thick silver pen struggling to be hidden somewhere safe. Jennifer was almost stuck between Cyrus and the phone booth floor. The night was so dark that no one could possibly guess that two people are wrestling inside the phone booth. Cyrus, who still has not seen who he has attacked, seemed to be furious with anger.

“You sick woman,” he pulled her by her hair just to turn around exposing Jennifer’s swollen face.

A moment of silence and shock was what the Friday night was witnessing. Cyrus would feel the fast pounding of Jennifer’s heart. Jennifer was exhausted from running and the strong blow she had received from Cyrus hurt her too much. Having realized who she was with, Jennifer held her head down for a moment. She never wanted Cyrus to see her this way. Nor did Cyrus.

“Jenny! Jenny! ….” Cyrus mumbled and struggled for words. He was in shock. The sight of Jennifer with a villainous look and the blood oozing from her forehead and mouth made Cyrus froze.

“Yes, you are right. I am not who you expected to be,” shrugged Jennifer and straightened herself to a position.

Cyrus tried to hand his handkerchief to her. Without hesitation, Jennifer took it from him and wiped herself clean. And all the while Cyrus was looking at the silver cylindrical device she was clutching tight  in one of her hands. He did not fail to notice the words written on its cap - German Silver Pats Pen. He saw her removing its cap to reveal a sharp instrument that looked like a razor. In his minds, dancing in slow motion  the words in a shrill voice repeated 'Her paintbrush is a razor, dear'. And as he expected, Jennifer suddenly sprang at Cyrus with her device and Cyrus started defending himself from her.

Tension was rising inside the phone booth with two young hearts that had been hiding what they wanted from each other. A friendship that bloomed, a love that started late and now the sour end that they hated to witness. A couple of minutes passed with their struggle, that caused no harm, but was simply trying to gain control over one another, both Jennifer and Cyrus paused.

Breaking the silence, Cyrus cried “So you are the one who was planning to kill me on coming Monday night, isn't it,  Jennifer?” with his eyes looking on the silver sharp razor. His voice broke as he said those words.

“I would have done that already if I have not fallen for you, you idiot Cyrus,” she was spilling out her anger at him. Cyrus saw tears accumulating in Jennifer's eyes.

“And yes, you definitely should call me an idiot since I have been loving you all these years without having any courage to tell you.” Cyrus yelled back at her. “…until you read my blog,” he slowed down a bit.

For a moment, only the sound of breeze knocking outside the telephone booth door was heard now and then. Cyrus broke the silence once again and questioned Jennifer, “Who the hell are you, Jennifer?” looking straight into her eyes and searching for answers.

Jennifer pushed aside Cyrus question and said, “You cannot know the answer to that question so quickly Cyrus. If you really care for me, then do as I say. It will save us all.”

Lallan took off his white lab coat, placed it on the old wooden table near by and pulled Samantha close to his side. Samantha looked hot in her black gown, her usual Friday. She standing tall in her black patent gold buckle boots, smiling invitingly under the tight clutch of the manly Lallan. He neared her, bent down and pulled something out of her boots. In his hands lay a short cylindrical instrument, yet another Grabhorn pen razor similar to what he had given to Jennifer. Rotating it between his fingers,  he hissed something in Samantha's ears. She blushed! Even though she wore a smile on her face, her eyes were packed with evil hopes. She had been hiding so much of her true self from Jennifer. Jennifer was a tool for their well-planned game. Lallan had played his part well starting from wooing Jennifer and now the result, Jennifer is mending things for Lallan as Don J. "Don J," sneered Samantha is nothing but "DONut Jennifer," she chuckled.  Her punishment by Lallan was too strong for her. Samantha knew like her, Jennifer too cannot trust love anymore.

Trust as they say once lost can never be regained so easily. It was like a broken mirror, cannot look or shine the way it used to be before. Tara’s trust is like those broken pieces of mirror. She was trying to pull herself up saying that Shekar would have a justified answer for his wrong doings. Moreover, with just two days in between she has to find a way to stop someone or something breaking her family apart. Her only hope now was Aryan.

The Chuna Mundi room was busy with Aryan cracking the mystery clues. He pulled out a pen and a note from his pocket and quickly wrote something on it. He then placed what he has written along with all the other clues which were spread on the duvet covers of Cyrus's bed.

The duvet sheet now hosted what would be the solution for Monday’s night mystery. Three pieces of information lay neatly arranged next to each other

“Dutta’s finished” the paper Aryan wrote lay next to the bits of clues which was left every time before the bitches disappeared in the morning,


Not once | nor twice | nine times | we’ll kill
A bitch | always | but ninth | will fill
You with a dread that’ll make you still!

Aryan then looked at the final message that he had retrieved from the stone. Written on the crumpled paper were the lines,


“No more running away from me,
I have come so far to thee
Once a Drug dealer,
Now calls himself a Writer
Your past is no more a secret
Your time has come to regret
Not one, each Monday night a scar,
Beware, the ninth you are”

Poetry is sure not treacherous. Aryan's experience knew how things worked. Picking the right dose of words and with a calm mind, a poem can be transparent in its meaning. Everything about Monday mystery now seemed to be in place. The ninth target was clearly Shekar Dutta.

Tara was still recovering from the shock holding Roohi tightly in between her arms. The sight of neither Cyrus nor Jennifer was nowhere to be seen. Shekar seemed to be sitting alone, shameful of his act and the situation he has dragged his family into. Looking from Shekar and then towards Aryan, Tara eyes was calling for help. Aryan, she believed is the only one who can do something to save her family from falling apart.

Aryan understood Tara’s silent stare and nodded his head in approval. Recalling what Shekar has said about his past with Paresh and Samantha couple of hours ago, Aryan had to conclude that Dutta’s murder has something to do with his past. A past that entwines either with Paresh or Samantha’s future. Aryan sat with both of his thumb fingers holding his chin upwards with his hands held as if in prayer. He was thinking deeply.

Shekar and Tara could hear an agitated voice crying into the phone. “Sir, we have got information of a dead body inside an enormous building in R.K Puram from a team of officers. The people staying around the building have been complaining of a stinking smell arising from inside the house. And, we heard that the building has name board and belonged to someone called as Prof. Paresh Borah”.

to be continued... Here --> The dark and gloomy night is over

“Me and my team are participating in ‘Game Of Blogs’ at BlogAdda.com. #CelebrateBlogging with us.”