Info Post
Uma Anandane
October 28, 2014
1 comments
Twitter gets the Robbie Williams fever as he kept updating several videos to Twitter throughout Monday evening. And the news is he is going to be a dad. How excited he is that he keeps live blogging all that happens before or on during the delivery of his child. This is his second child and the first one is a daughter named Theodora Rose Williams. The trauma and the fun, he shared every now and then with his 35-year-old wife Ayda Field showed how much the couple enjoyed the delivery experience. 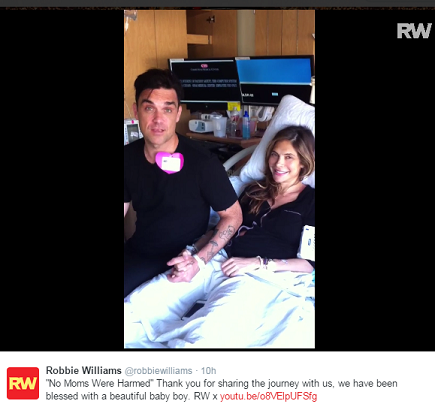 The whole experience of how a dad might feel from the start till the sweet end has been tweeted for about 13 hrs continuously. Starting from "Nurse, she’s out of her bed again" to "Holding in there", you can see how excited the couples were.


He even updated the status to his 2.34 M fan following as,

"We've been here since 10 o'clock last night," he said looking straight into the camera. "I know you're really concerned and worried and thinking about what's going on. I need you to know that... I'm doing great." Bravo Robbie for thinking about how concerned your fans might be.

Robbie Williams is also showed comforting his wife and distracting her by discussing his 'comfy' fashion choice.

And finally all went well as he uploaded the final video with the status "No Moms Were Harmed" Thank you for sharing the journey with us, we have been blessed with a beautiful baby boy. "

"No Moms Were Harmed" Thank you for sharing the journey with us, we have been blessed with a beautiful baby boy. RW x http://t.co/dgS5SiykQC
— Robbie Williams (@robbiewilliams) October 28, 2014

And finally, here he sits next to his wife on her hospital bed, telling the audience. "Erm, so, he's here. It's ten past three on what day? Monday? And we've been up way over 24 hours. I've never been more in love and I've never been more proud of my wife, she's been absolutely astonishing."

Although many don't appreciate his attempts on this day, the final video of having gone through all the pain, the couple had a satisfied look and this is what he has to say. Call him Maniac or what, it is up to the viewer who interprets the message in the video.

Robbie Williams is an an English singer-songwriter who has won has won more BRIT Awards than any other artist to date. Whatever he thought when he did this tweeting and live bogging stuff, is up to him but it at least stays as an example of  how a woman struggle through a pregnancy to all men who needs to respect woman for what they are.