Latest Articles
Loading...
Home » Lifestyle » Personal Thoughts » Tangible or Intangible that I pass on to my Children

Tangible or Intangible that I pass on to my Children

"She has got the smile of from her mom"
"Even your grandpa had the mole near his eyes"
"He is just like his dad"
"She is as creative as her mom"- traits that have been passed from one generation to another from tangible things like physical appearance to intangible things like personal characteristics.

When my daughter was born, people said that she looked just like me. It has been years now and I can visualize how I grew up from being a tiny baby to a loving child through my daughter. I also understood more about patience and unconditional love after I became a mom for the first time. 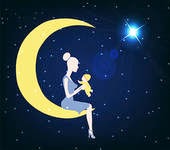 The first time my belly became big and the first time, a new life in me started kicking inside me made me more feminine and much closer to my parents than I was before. When I saw my baby the first time, I was still making myself believe that I became a mother and the feeling of what I see hugging closely by my side belongs only to me - the future that I hold. Every mother knows that feeling which cannot be expressed in words.

Years later, my son was born. He had his own personal touch - an observation skill passed from his father and the attitude of his mom.


And as my children grew, apart from that which been passed through genes their personality traits are greatly influenced by their surroundings. And this is where feel that my children lack due the nuclear life away from our culture. Yes, there were some intangible characteristics that I and my husband enjoyed through experiencing from our surroundings where there were more people interactions and more of outside life than just sitting before TV. But back here, my kids have very less interactions with family and relatives than what we parents had.  Although they knew about their family tree, they could not understand or enjoy the real value of being with grandparents, aunt, uncle or cousins. This bonding between family and relatives is where I learnt the meaning of hope and support system. There is this safety that makes you feel that you are not alone. There was an invisible bridge that connected one family to another making each other go strong.

But, sadly in this era of twenty first century where everything became techie, the generation Z kids miss something that is very important in life - a hope that they are not alone and are surrounded by people who care and willing to come forward to help. And this intangible trait is what I would like to teach my kids and would love to pass on to them.

Not only the above that the generation Z miss, there has been a great alteration to their lifestyle as well. The pesticide free foods that Gen X and Gen Y ate, their way of living all contributed to their disease free long life. But in the present scenario, even young children are prone to diabetes and for adults their average lifespan has reduced to an extreme extend.

Tangible or intangible, I believe that one vital thing that should be passed from one generation to another is a hope that can create a difference in someone's life.