How to Construct a Time Machine Exhibition and Children Workshop

Info Post
Uma Anandane
February 02, 2015
7 comments
Time Machine, not the Apple OS X Time Machine but the concept of time travel using a vehicle is a fascinating and popular theory that have always been adapted into television series and movies. Noticing the title "Time Machine" in an exhibition will only increase the curiosity level of any sci-fi lover, children or someone who wants to escape from the present.

I, having interest on sci-fi themes went to attend the MK Gallery exhibition and workshop on "How to Construct a Time Machine" along with my kids. This is not my first time to the MK Gallery and hence I know how things actually worked there. In fact, I keep track on the upcoming events through the newsletter or the MK Gallery website and when something interesting comes up, I make sure that I pay a visit on a weekend that was feasible to me and my kids. So, having signed and seeking permission to take photographs, we entered the MK Gallery whose exhibition was divided into themes like sculpture and movies displaying works of many imminent artists.


Standing in the centre of the  room is a big polished stainless steel police box which my daughter referred to as Dr Who’s police box. This box is said to appear in fictional movies as a TARDIS (Time and Relative Dimension in Space), a time machine which disappears into the space-time continuum and reflects its own surroundings. My kids, Cherry and Berry happily posed for a snap standing near the Dr Who’s police box.

Then, we entered the other room where we saw Sleep 2014 by Elizabeth Price which uses solar imagery, speeding chronologically through thousands of images of the sun. She presents archives from glass plate slides produced in the early 20th century to digital moving image as a staccato animation. There was also a decimal clock which echoed the 18th century French Republican attempt to redefine and rationalise the day diving the clock into 10 hours rather than the usual 24 hours. 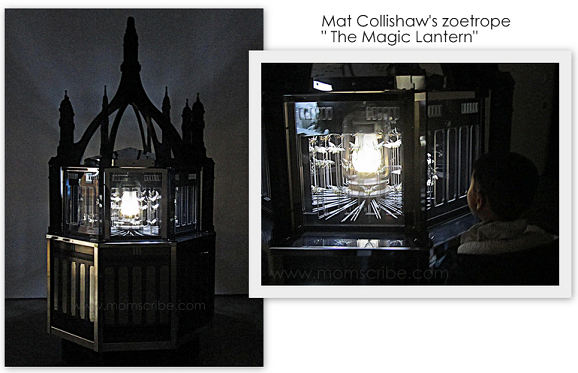 Next, we entered the last room on the side which was dark as it had the model of Mat Collishaw's zoetrope "The Magic Lantern", a smaller version build in an octagonal structure which has animating moths in three dimensional models which flutter around a glowing interior resembling like a lantern. When the Collishaw's zoetrope begins to spin, it was one of the most beautiful illusion of fluttering moths trying to reach the light which otherwise remains still. The whole scene was having an effect of beauty, life and activity all combined into one. The one seen in MK Museum was a smaller size replica of the pre-animation device commissioned by the Victoria & Albert museum that was installed in the cupola above the entrance of the museum.

It also featured film work "A Trip to the Moon (1902)" by George Méliès which is an silent movie of a group of astronomers exploring the moon and the "Time Machine in alphabetical order" by Thomson & Craighead. It is said that the latter movie is a complete rendition of the 1960s film version of HG Wells novella re-edited by Thomson & Craighead into alphabetical order from beginning to end making an attempt to create time travel through the use of a system of classification.
It was time to visit the workshop and hence we had to quit watching the movies and walked our way to the opposite building where we joined with other families for the Saturday's workshop. I was excited as much as my kids as we entered the workshop. We had a warm welcome and along with us there were four more families with the kids. After showing our booked free tickets for the workshop through Eventbrite, we were asked to work on our project.


The workshop sounded good and fun but I was expecting more since the topic said “How to construct a time machine". It was not that very technical in approach like someone guiding or teaching you about time machine or how it works but we had been given materials with which we should come up with our own creative ideas to construct a time machine. The workshop was especially focused on young children to come up with their own ideas and make them construct something.


We spend three hours cutting and tapping card-boards, using pipes, fluorescent cloth and many more items that were spread on the ground. And many times, we put our thinking caps on and worked out on the model. My son added the white pipe on the top so that the structure imitates a tanker where as my daughter put some fluorescent cloths inside the round pipes on top telling that it blows out fire as the vehicle flies. They even painted a chair for the machine and a wheel for driving it. At the end of three hours, we finally came up with a time machine which my daughter Cherry named it as a flying car jet and my son Berry calling it as a flying tanker.

Our construction of the time machine called "The Flying Tanker" or " The Flying Car Jet" was successful and my little ones were off on their way travelling through time. Happy Journey! :)