Enjoy Heroes of the City Episodes and Fun Activities on YouTube

Info Post
Uma Anandane
March 04, 2015
5 comments
The first time we came in contact with the Heroes of the city episodes, a TV series about the life of vehicles in a small city was through a DVD, a book and two cute little dye cast toys which we reviewed about a year ago. My kids Cherry and Berry both loved the series specially because they involved different vehicles becoming characters of a story. And as with every story targeting the kids, the plot is clean and friendly with cute animations that involves attracting young children at the age of 2 to 6 years old.

The theme song of the Heroes of the City  is really one of a kind that can be heard over and over again. And guess what everybody gets to be a hero in this preschool animation helping each other when ever something happens to harm the city. Well, I get it - Unity is strength and the makers of the movie, a Swedish company made sure that they had everything to keep the kids entertained.

The characters that is built in the story is really neat and loved by my kids. Each character (vehicles) work in line with what you expect them to do. The Calamity Crow, the one who calls or caws for help, Alice the alarm who announces emergency alerts, Pauli Police Car who is always on watch out for the city's safety, Percy Post travelling around the city delivering the mails, Fiona the Fire Engine, Hector the Helicopter, Tilly the Train and many more interesting characters which we see everyday in our life. And not to forget some of the lovely animals seen now and then on the series.

So if you waiting to watching the series, worry no more about the DVDs or the books, the Heroes of the City are now available in their re-owned YouTube Channel as well.

Heroes of the City 2 - Garden Grabber Episode 08 - a Glimpse


Zoofie’s garden is being robbed. Someone or somethingn is stealing vegetables from his garden everyday and Zoofie, the gardener calls for help. The Calamity crow along with Paulie Police Car investigates the case. It looks like someone innocent is to be blamed for the theft. Will they Heroes of the City find the real thief and help solve the case?

If things go so wrong! Our heroes are so strong
It is time for heroes, call the heroes

Will Heroes of the City make it in time? 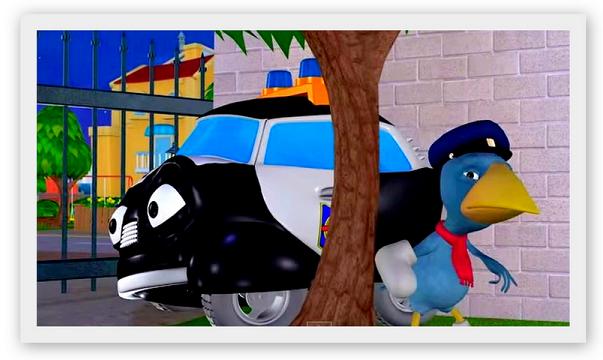 The Heroes of the city in the YouTube is in its early stage and there are about 15 full episodes of the series which will make kids, especially the ones who loves cars and vehicles happy. The movies aims on teaching values on friendship and goodness of helping one another through the characters loved by the kids.

Their YouTube channel also includes Kids Crafting Show like crafts on how to make a racing car out of a paper roll and paper snowflakes. To make drawing fun and easy, calamity crow involves in a guessing game teaching some basics of drawing to your little ones on "Sketch and Guess with Calamity crow".

Berry's "PIRATE SHIP" - from Episode 9
So if you have some kids at home who love all things in wheels, let them have fun watching or drawing with Heroes of the City in the YouTube Channel. And, don't forget to come back and tell us about your favorite episode in the Heroes of the City.