Info Post
Uma Anandane
March 25, 2015
4 comments
Scratch is an interesting programming application which enables children as well as adults to create animations, games, even driven programming, simulations including many other interesting projects and experiments. The fact that Scratch is free to download and use is another advantage - download Scratch 2. The simple drag and drop controls blocks used in Scratch programming are quite easy for the children to build their own projects. Kids can get creative with scratch coding which enables them to come up with their own inventions too.

Using Scratch as our programming tool, we are going to see how to create a simple animation which responds to keyboard keys. You can notice the scratch dashboard is divided into three vertical panels (left, middle,right) which further is divided into two parts.

So now using all these features we are going to create a simple animation to the default sprite thumbnail "Cat" by adding some sounds and background animation. You can change your sprite character by clicking on the New Sprite tab which has "Paint new sprite", "Choose new sprite from file" and "Get surprise sprite".

How to assign sounds to computer keyboard keys


1- Click on the sprite to which you are going to add the controls. Now, drag and drop the control "when (space) key pressed" from the left panel to the middle panel. 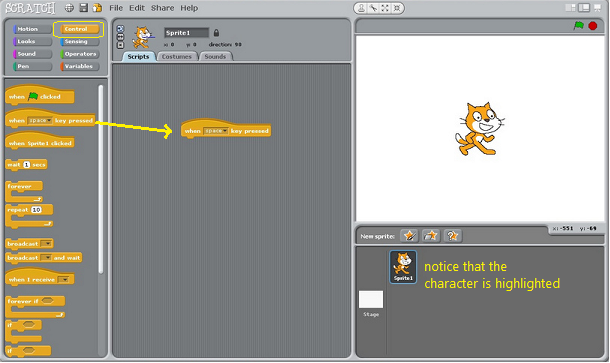 2- Let's Choose the default sound "play sound (meow)" from the bottom left panel and drag it to the middle panel. 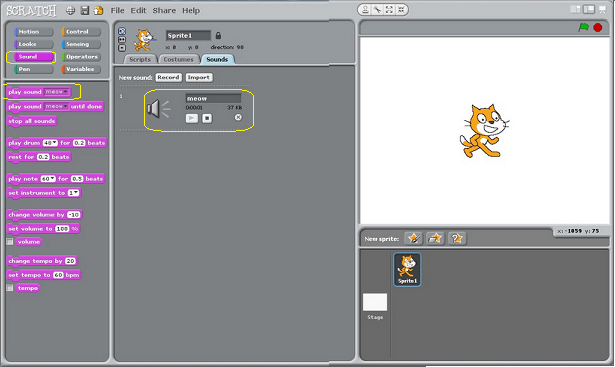 3- You can notice that the blocks looks like a pieces of puzzles that can be snapped together for a particular control. Similarly you can snap blocks together using different controls as you build your projects. Right now, we will concentrating only on sounds and backgrounds. 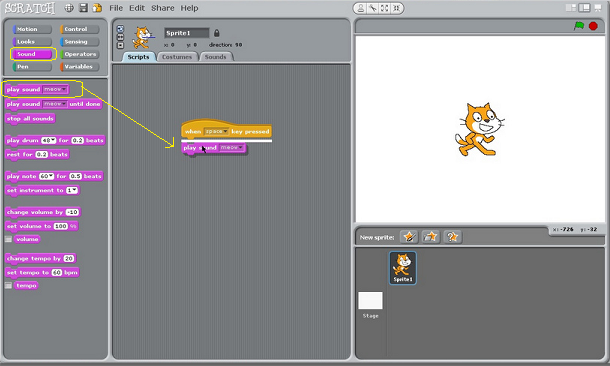 4- Update your scripts by clicking on the "Green Flag" you see on the upper left of the Scratch. Also, it is important that you save your project. 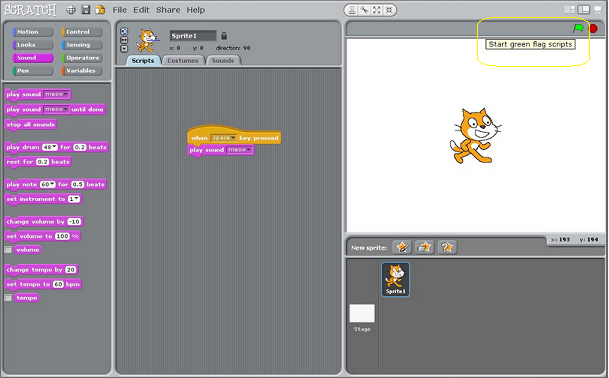 5- Now, play your project. You can run your project from the Scratch dashboard or by clicking the television like symbol on the upper left corner "Switch to presentation mode". Whenever you press the space bar on your keyboard, the cat makes a meow sound.

Similarly you can add any number of controls for each key assigning different sounds for different keys of your keyboard. Instead of using the default "space" key, we can use any key from the keyboard by clicking on the down arrow seen on the control. 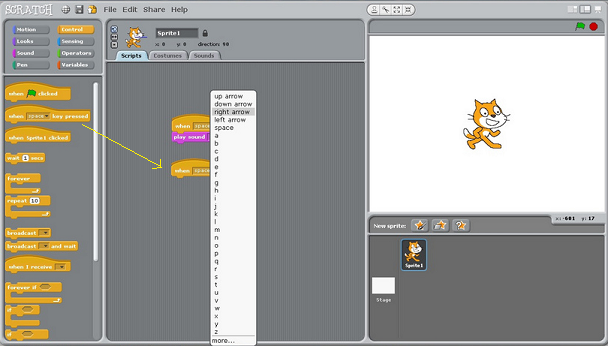 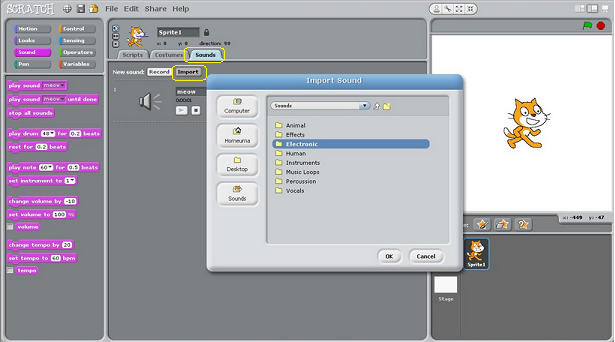 I have chosen a sound from Electronic-> Peculiar from the library. You can see the chosen sound on the "Sounds" tab in the middle panel just below the default "meow" sound. The same is reflected on the left panel. ( notice the circled yellow). 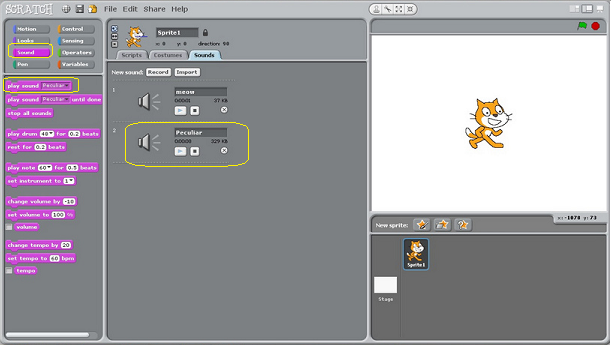 Then, drag and drop the "play sound (Peculiar)" block on the middle panel to the respective control. The two blocks will snap together. Now, that we have assigned music to two different controls, update the green flag. 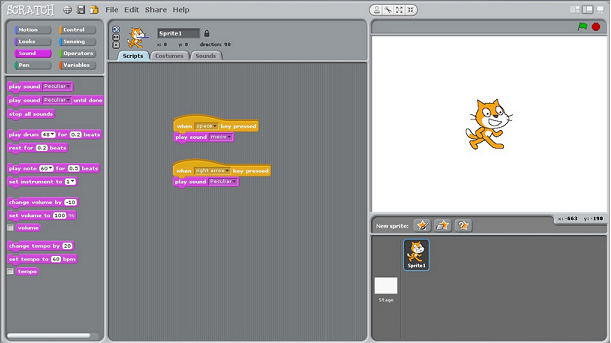 Result:
The result of the scripts will be that the corresponding sounds get played when space bar and right arrow key gets pressed on the keyboard. For the rest of the buttons in the keyboard, unless you assign sound to its respective control it will remain silent.

Notes:
Now time for your homework kids: Try adding more sounds to different letters in the keyboards and see how it works. If you are confident with this Part 1 of Scratch, proceed to Part 2 of Scratch Programming for Kids which explains how to add backgrounds.

And finally we are going to experiment our scripts using a special keyboard called "Makey Makey" which has the ability to make anything  around you into a control like your play dough or apples or bananas. The only criteria is that the things used as your keyboard should be little conductive in nature. It's time to get creative!