Laws of Life in this World

Info Post
Uma Anandane
October 22, 2010
2 comments
Life is a nucleus of all living beings.There are laws that has been derived to explain some complex theories in this world. Here , I tried to relate such laws to our life. 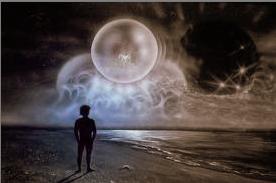 The Theory of Relativity : The general Theory of Relativity is invented by Albert Einstein.It demonstrates that time is linked to matter and space, and thus the dimensions of time, space, and matter constitute what we would call a continuum. Time itself cannot exist in the absence of matter and space.That is , the speed of light is the same in all frames of reference(constant always), but the distance the light traveled differed between observers moving at different speeds.Since distance is speed multiplied by time(d=st), Einstein concluded that different observers must see time differently meaning that the speed that one progressed through time varied with your frame of reference and relative motion to the object you are observing. You can only move at the speed of light in space, but can move infinitely fast through time.The physical nature of time and space concludes a Creator, for infinity and eternity must necessarily exist from a logical perspective.So in our perspective of life too complex,we can infer that some power or God exists
Newton's Third Law of Motion: For every action there is an equal and opposite reaction.
This is true in our practical applications of our life.Its well-known fact that the first role model or say inspiration of the growing toddler is derived from his/her parents.If the parents are soft-spoken as defined by an action of speaking sweet words and being nice , then according to our law the toddler amazes us with their knowledge to imitate back.In case, the parents shouts or beats them,don’t be surprised if the little one do them back at you.Not only this fact is true,this is also applicable for husband-wife relationship or any other relationship that is not threaded by unconditional love, which is an exception.Learn to give and forgive for the world is said to be circular,your time can be theirs and theirs yours.
Newton's law of universal gravitation :It states that every massive particle in the universe attracts every other massive particle with a force which is directly proportional to the product of their masses and inversely proportional to the square of the distance between them
F = G(M1 M2)
---------------
R^2
This can be sometimes defined by the term “Love” .The force (F) in which we love someone is directly proportional to the product of love that exits in the man(M1) and woman(M2) and inversely proportional to the square of distance (R^2) between them.The more they are far apart ,love seems to exists even stronger.Even it is partically true in the place when ‘X wants something and ‘Y’ resists,Newton’s law of universal gravitational comes into place making 'X' wants that particular thing more than before.
Laws of Attraction : The Universe exists as infinite potential in infinite abundance. We dream we work and we create.When our dreams becomes thoughts, we focus on to it and we have the power to bring our desires into existence that is ,our dreams into reality. As per the law,What we think is What we get.If we focus more on negative thoughts it will have a negative impact on our life.If we focus more on positive thoughts ,it will definitely bring positive impact on our life.


Newton's Quantum law: The Newton quantum law takes a material perspective in which the Universe is composed of mainly discrete building blocks, solid and unchangeable. The Quantum physics takes a spiritual perspective in which there are no separate parts, everything is fluid and is always constantly changing.The physical world is a sea of Energy constantly flashing into and out of existence. With quantum physics, science is leaving behind the notion that human beings are powerless victims and moving toward an understanding that we are fully empowered creators of our lives and of our world.We are a being that has the ability to transform to a person who or how you can be.Such is the thinking of human mind , very powerful.
Survival of the fittest:Herbert Spencer first used the phrase after reading Charles Darwin's "The Origin of Species" in his Principles of Biology (1864), from his writing.This survival of the fittest is what Sir Charles Darwin called 'Natural Selection' The fact is preserved for the favoured races in the struggle for life.The more you fight for a thing ,the more nearer you get to it.Every failure is the stepping stone of success telling that you are more sharpened by this skill to live strong.With wise use of it,you can reach the top of the ladder soon.