Info Post
Uma Anandane
October 18, 2010
1 comments
The Phi and The Fibonacci Number
I got so attached to this number Phi after reading the novel "The Da Vinci Code" by Dan Brown.The novel is full of twists and turns and surprises you with its mathematical involvement.As a lover of maths,I started to research about Phi and Fibonacci and here I am posting them the way it amused me.The links between Phi and Fibonacci is so beautiful that one cannot ignore it.
What is Phi ?
"Phi" is the ratio of the sum of the quantities to the larger quantity is equal to the ratio of the larger quantity to the smaller one.
The golden ratio an irrational mathematical constant, approximately 1.6180339887.It is also called Golden section or Golden Mean, divine proportion, divine section, golden proportion, golden cut,golden number, and mean of Phidias.You can come across these terms in Dan Brown's Book.

It is denoted by

The geometrical figure that is commonly associated with Phi is the Golden Rectangle. This rectangle has sides A and B that are in proportion to the Golden Ratio. It is believed that some architects and buildings have been built with this golden ratio. If we take a golden rectangle and bisect one of the base angles ,we should get another golden rectangle.If we continue in this fashion we should get a set of Whirling Rectangles.Out of these Whirling Triangles, we are able to draw a logarithmic spiral that will converge at the intersection of the the two lines like shown below 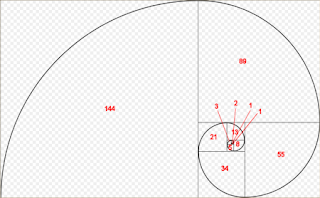 
Here when you divide one number in the sequence by the number before it, you obtain numbers very close to one another. In fact, this number is fixed after the 13th in the series. This number is known as the "golden ratio."or "Phi" as explained above in the golden rectangle.
Thus ,the Fibonacci sequence and the golden ratio are intertwined with each other.