Info Post
Uma Anandane
May 10, 2012
12 comments
Zoozoo - a born genius ,young and  bubbly boy would make any head turn , not because of his looks but because of the mischievous things he does. If Wayne Szalinski of "Honey , I shrunk the kids" ever had met Zoozoo ,he wouldn't have been worried about his shrunken kids.As mischievous as Zoozoo could be , he was the Master of his own virtual world , exploring the adventurous possibility to survive through the possession of his 3G Mobile Phone.He made cart of friends through chatting and tweeting on his mobile phone but none would be compared to his new found friend Tootoo. Tootoo was girl bubbling with beauty and loves to be  fascinated by the out of the box experiences .And that's why everyone could spot her with an Ipod on her jacket with her ears always plugged.She believes that  her Musical therapy was making her beauty glow and so she cuddles herself up in the voices of the Akons, Rihanna and the Cosmic Bros .The same frequency of thoughts between Zoozoo and Tootoo paved way to their friendship which made them the talk of the town.

The above Introduction part would make you wonder what I am up to now.To come out with an interesting story, someone or something should inspire us to make it possible.This story was born as a part of Internet is Fun using the famous figure Zoozoo of Vodafone in respect with Indiblogger network.The One-Line of this Story is "The Possibilities of Internet to survive an attack".So if you are going to read more, make sure you are going to have a hell lot of FUN here with INTERNET.

Zoozoo and Tootoo was the best of friends now.They always walk together while going home except that Zoozoo keeps his face cross.(you should wonder why here).The reason being Tootoo was no ordinary girl who chit-chats while walking.She was a way different with her identity "Always On Air".That day was no different either which made Zoozoo sick because he couldn't convey his new highest score ever achieved in Angry Birds with her.As they neared the thick bush on their way , Zoozoo couldn't control his excitement and temper.

"Tootoo, for God's sake can you just take off your ear phone at least for time we were together? " , Zoozoo asked impatiently
Tootoo noted his disappointment yet didn't give up . She in turn replied him in negative with a funny smile.
"How could you ask it Zoozoo ? I am just being ME " she scowled back.
" Arr.. ammmm...mm" , Zoozoo moaned in disappointed again.
"Oh! Come on Zoozoo, this is Important." she stressed the last word ."The Cosmic Hero's new Music album is out.And I am having fun with it.Wanna join me ... " as she asked ,she took one ear plug from her ear and handled it over to Zoozoo.

Just then it happened,
Two slender men , Midgets - the height till your hips , dressed in black cloak snatched Tootoo away into the thick green bush. Zoozoo was terrified. 'Yuck! they smell like fish' he thought. He tried to push himself through the bush on an impulse to save Tootoo but before he could do it, the two men unmasked themselves carrying Tootoo away.

"What the hell they are ..err..like Pygmies..Strange" Zoozoo thought.As he was looking out for some help,
Zoozoo noticed something strange on their back.'It looks like a Zebra stripes...', he thought again.

A Bulb glowed on his head.Tada Oh! It's a CODE. Zoozoo did not waste time.He quickly took out his mobile phone and scanned the codes using Barcode scanner app on his Mobile phone. Now, Zoozoo was left with a strange link on his phone.

He browsed the link which took him to a website he never heard of. The Title of the page looked even more puzzling to him

Before he could proceed further, he heard a sudden slush and hush sound zooming over the sky above his head.Zoozoo took a deep breath and thinking of Tootoo, he browsed further using Google search engine on his Mobile .The Internet geek in him began to respond  to his quick thinking act.

He soon found that the code belonged to the aliens (pygmies) from Mars, the red planet.The .mars on the website link above served as a solid proof to him. And he was sure that those two Pygmies have kidnapped Tootoo in order to make her as their final specimen for something called ' Project Red'.

But what the hell is Project  Red and  how was he going to save Tootoo ?

He is now left with two choices.One , he has to panic and tell the world about what has happened .But who in the world would ever believe him of the stories of Aliens from Mars kidnapping Tootoo.Full stop.

The other choice was to find Tootoo himself .His only weapon now is his Internet enabled -Mobile Phone 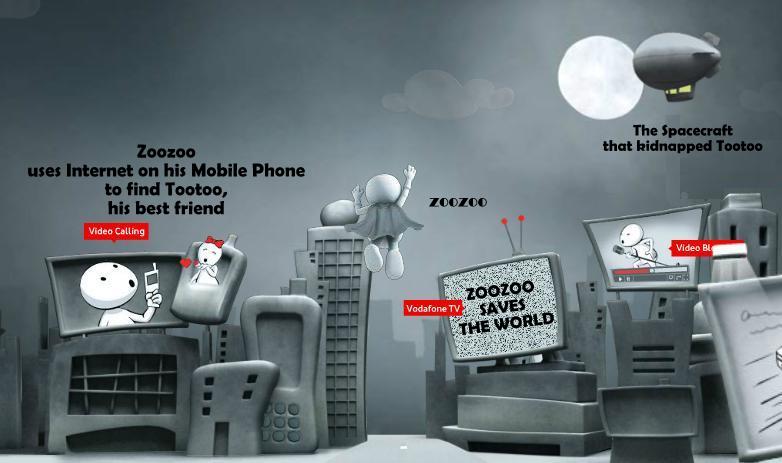 Well, thanks to an interesting and useful solar charger app that he downloaded from Internet.He used solar power to charge the phone.And when the sun is absent, his physics and maths ability came for help.He shook his phone vigorously from left to right and using the Kinetic energy , he charged his phone. Anyway, he did not run out of battery any time , any day .

"Now My mobile is now all in one equipment that I need to feed my brain to find Tootoo and the biscuits to feed my stomach.I'm all set to work" he thought.

First, using the scanned code from the pygmies , he hacked their .mars websites and traced the IP address of their spacecraft which they use to contact other pygmies and their plane.Then, Zoozoo registered  the IP address on the Geometric locations of the Google Earth and began to track the alien kidnappers whereabouts using Google Map.

Zoozoo noted that the spacecraft headed towards North west of Mumbai and landed on a particular spot."I have to use the Navigation app to find the optimal distance to reach Mumbai from Chennai.(oops!! That's where I am now )" thought Zoozoo.

Zoozoo booked an Airline ticket using his Mobile phone and using online transaction .Using the ticket, he flew towards Mumbai [there are no Airplanes in Zoozoo's world.He used the ticket as his entry slip to another country and Zoozoo knows how to fly ].Finally he reached Mumbai Gate.

The map on is Mobile pointed towards the Ajantha caves .It is where 'it' has landed. It is now very important  how Zoozoo takes his further steps .He hid himself behind the caves few miles from the spacecraft watching the alien pygmies taking Tootoo away .On Impulse, he took his mobile phone again.Using Instagram, he pictured the scene as it is and posted the emergency situation through Face Book and Twitter.They became Viral in seconds.The message passed quickly all around the globe even to the NASA office and  everything  that happened afterwards were flash news.

The NAVY, MILTARY and AIR-FORCE joined arms with NASA and surrounded the cave.Zoozoo along with them got hold of the two pygmies.The enquiry that followed revealed that the two pygmies were the heads of the Project Red and they caught Tootoo through her Cosmic signal (hell with that album she heard then) which  lead to the overall situation now.Making her the final specimen and completing the Project Red would accomplish of the Alien pygmies getting in control over the Humans on the Earth .That is, through making Humanoids by genetically modifying human genes ,they would make Humans to serve the Alien pygmies.Now , saving Tootoo was indirectly ending the Project and thus saving Human kinds from genetic mutation.

As everything was about to have an happy end , another disaster was waiting to happen again .

The two Alien pygmies were not alone.More Airships were seen on the sky and more pygmies appeared from no where.The Military, Air-force,Navy, NASA and the others on EARTH were now ready for a WAR. THE ALIEN WAR.The WAR that would claim to be more destructible and also unavoidable.