Info Post
Uma Anandane
October 04, 2012
1 comments
Keeping clean is the most hygienic way of staying healthy.We , as humans have known and experienced many ways to clean ourselves both externally with the use of soap and water , as well as internally using detoxification.Apart from humans, common pet animals and farm animals are cleaned by their owners and  sometimes unknown  to most of us , they clean themselves. Dogs are usually bathed like we do , and whereas Cats ( being one such owner ) cleans themselves by licking their body.

I have wondered  how the female ones go through the birth and still keep themselves clean. I knew their sound of labor pain , and then suddenly they are there being a Mother of three to four kittens .My cat opened the door to new experience on mother hood by animals.She fights back the male who comes to seduce her in breeding times trying every way to lure her attention and sometimes kills her kittens. If I could , I can even write a short story on Cats survival.In keeping themselves clean , cats are much clever than we think.

Do you ever know how the cats cleans her bottom after she poos ?. Yeah, I have seen it . The Cats usually digs a hole in the mud/sand, poos inside the hole and closes the hole by mud with her feet. Then, she sits with her bottom and moves a few distance cleaning the remaining dirt off her bottom. As interested as it might sound, they are very much true . 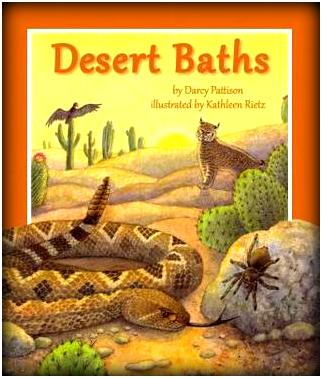 Darcy Pattison, who is published in eight languages and the author of Desert Baths have been ignited with an idea of  writing a book on how animals in the deserts keeps themselves clean. It all just started  when she read about Anting , where the birds (esp.Quails) walks onto an ant mound , spreads their wings allowing the ants to crawl over their wings and cleans off the parasites. Some birds , alternatively will crush the ants and use them as a  brush to clean themselves.She said that scientists believes the formic acid from the ant functions as an antiseptic.Finally, after thorough research and talking with scientists, she came out with a book named "Desert Baths " which  explores different ways the desert animals keeps themselves clean getting rid of dirt ,germs and parasites .

Being a  recipient of the Arkansas Governor’s Arts Award (2007) for her work in children’s literature, Darcy Pattison has skillfully handled this subject for children.She chose to do lyrical writings along with illustrations by Kathleen Rietz who have done complete justice to Darcy's lyrical writings This book is a perfect launchpad for children to explore more on desert animals and their way of living.It also includes Food for thought for the creative minds for educational and non-commercial uses like
An activity pack (to encourage children to learn more about life in Deserts ) of Comprehension questions, writing prompt  word search, animal chart , sorting cards etc. are available for free use and download from the Publisher website SylanDellPublishing

Overall , this book provides a platform to teach kids ,exploring the science / biology behind such hygienic cleanings and to learn more from animals /birds way of living life in deserts .