This post is a part of the chain of stories written by members of the Chennai Bloggers' Club for Valentine's day One Post One Scene Tag. This story happens to be a love story wherein each member blogs his own story following his predecessor and I am hereby entitled to write the penultimate chapter of this Story.

Guru was covering Ahalya's eyes and asked her to follow his instructions. Ahalya was so curious but she agreed to this small game since it has been ages she had been so carefree like this.

As Ahalya and Guru moved forward, Ahalya felt as if she was climbing on something and the cool breeze that hit her face proved her right. She was climbing a mountain.

"Ahalya, open your eyes slowly and look in front of you, " said Guru taking his hands off her eyes and placing it right on her hips. He stood holding her tight from her back enjoying his wife's reaction.

"Wow.This view is splendid Guru. I have never seen so ..." she yelled turning back only to see Guru looking at her with deep set eyes and with luscious smile admiring her all this time.

Only then, Guru saw something he never saw in Ahalya before. This carefree, loquacious and confident girl finally knew how to blush. They hugged each other and enjoyed the view of the Maui’s Haleakala Crater from the top of Molokai’s majestic sea cliffs. 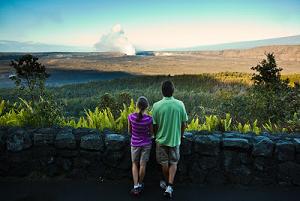 " This pair would make anyone jealous " murmured Meghna to Karthik as they passed by. But before leaving, they asked Ahalya and Guru to pose for a intimate photograph and reminded them of the Lantern ceremony that was scheduled that night.

Guru lead Ahalya to a nearby cliff and sat. Ahalya sat a step below Guru and laid her head on his lap. Guru lovingly ruffled her hair and asked ," Ahalya, I thought of asking you this question for long but couldn't because a lot of things happened in between "

Ahalya looked at Guru with questioning eye. Guru continued , " When we first met at the airport , you told me about a specific family issue and your impending moves to resolve the same along with your sister. What was the outcome? Have you both finally resolved it? "

As Guru kept on speaking, Ahalya was already on the verge of crying . She controlled herself and spoke , " So it took you so long to ask about this to me. But I am glad that finally you did, Guru ". She continued,

" It all started with my father. He is a great pro in making a live man dead and the dead alive. He did the same to my Uncle , my mom's only sister husband when he was working as a secret agent. The news spread like a wild fire in our family and my aunt went into coma for a couple of months on hearing the news. My uncle was so furious with my dad because he already asked my dad to tell his wife about this project and his false demise which my dad failed to do so. A lot of problems followed then. It has been years that they spoke to each other. My sis and I compromised them with the help of my aunt and mom lately only to find my dad suddenly appearing back in Sweden breaking his promise once again " She spoke remorsefully.

"Hmm...the nature of job is like that, Ahalya. Don't you remember that your dad even made my name appear in the Sweden blast victim list. And he did it purposefully so that he can utilise me for his job without anyone doubting us. Your dad is a very clever man but also takes very high risks. A secret agent retired or not always feels he is the one who can solve certain crimes. Once committed, no one can stop them even your dad himself ." Ahalya turned angrily to speak something but Guru continued , " Don't look at me like that, Ahalya. A promise is a promise. And I will surely keep my promise until you promise me to stay here so that I can go for some job peacefully making sure that my darling wife is safe " he said.

There was  truth , confident and true love in his words. Ahalya felt a sense of satisfaction after what Guru had told her and she trusted him . She finally let out a brief sigh. They decided to convince their parents and let know their whereabouts. Afterall, this is a small world with Internet and Skype facilities.

"So Mr Anonymous , what kind of job are you going to do here, " Ahalya taunted him

"Haha...well, this Mr.Anonymous," Guru stressed on the Mr and continued ," will go fishing deep into the sea , sell a secret recipe for couples in love like us or even keep surrounding his wife twenty four hours a day " he winked and smiled.

Their talk ignited laughter and the sound of laughter grew louder with echoes repeating their happy moments. Hawaii was better than what Ahalya expected it to be and she was so happy to start her family here. All she need is a peaceful place and Guru assured her of a safe and wonderful future ahead.

The golden aura spread the sky carrying away the tired sun back to rest and paving way for some intimate moments for the lovers. Soon, residents and visitors started to flock towards the Ala Moana Beach Park with candlelit paper lanterns for "Toro Nagashi", a breathtaking ceremony wherein thousands of lighted lantern float on Hawaii water .

~ ~ ~
To all my readers , hope I have done justice to this love story. The final chapter is to be blogged by Clement Williams who blogs because he blogs and thinks he blogs ;) on Vadapoche Blog www.vada-poche.blogspot.in . Ciao!