Home » Causes » Social cause » You are just a woman

You are just a woman

Info Post
Uma Anandane
March 25, 2013
4 comments
Andria Richards reaction at Pycon and firing of an employee including herself stirred up a storm of remarks whether what she did was a right thing to do. 60% of comments unfortunately supported the offenders asking Andria whether she could have done a better job of asking the two men behind her to stop joking about "forking" and "dongles" instead of tweeting a pic which caused a public shame on the two employees. [ more details at her blog butyouareagirl.com ].

I also wanted to highlight that by writing this post, I am only taking about such men who makes the surrounding unsafe for a woman. Also, I salute to those men still being there as a pillar of support for a women.

Now coming to the point, I have to agree to the fact that what Andria did was a brave thing and what many women would not even think of doing in the first place. But, she took up the responsibility of standing up for many woman employees who silently undergo these type of sexual harassment in  at their workplace. Maybe, she was provoked with such continuous allegations which steamed up finally to burst out with a rash outcome. Either way, she gave a clear explicit warning to such men at her workplace.

The organizers of Pycon responded quickly at her notice and dealt with the situation as it had to be. This happened in America. But, what about here in India. Does this type of tweeting work in India or whether that women will be safe among such men if this happened to root from India. I can swear that she would have never got the same reaction as with Andria. Poor Andria in fact lost her job because she stood up to talk but rather in a harsh way. Yet, she gave other women what exactly they needed when assaulted physically , verbally or silently - the courage to face things and the rest of men who intentionally make such remarks on women to keep their mouth shut. 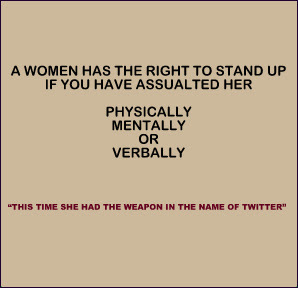 Clearly Women and girl child are not safe in India. Even today while reading yahoo, I witnessed a post about UK woman tourist crying for help from an sexual assault at night time in a Hotel room. Who would have forgotten the recent delhi rape case?. I still don't know whether that poor girl got justice even after thousands of protesters standing for her. And what about Men who complain women dressing sense is the cause for all these happenings when I had to remind them about the braless grandmas who used to tell tales about their pulled and wrapped up saree showing their thighs while washing and cleaning the house without any sexual assaults from nearby men. Is it because of the already used to the half naked look of a women to the eyes of men at those days ?

These sexual remarks and silent attacks not only happen in an office environment.They are happening in schools , inside buses , markets , roadside and even in few homes. And when I say home, I mean it  especially in a joint family system which should be a boon and not a curse . Not wanting to name , a maid once told me how she was sexually assaulted by her own uncle when she even don't know what is happening to her. But when she realized this at an age when she knew what was right and wrong, she despised herself and even her uncle. She could not face her uncle with the same rapport as a supportive men in her life but instead she recalls how he used her once. This is just one side of her story .

On the other hand, how many family wholeheartedly welcome a girl child into the family. Clearly, I can point out few root causes for these happenings
If the above changes, there might be a future where a girl child is warmly welcomed into a family. Also from the day a girl child is born till the day they die, women are just used and misused in the name of sacrifice and you are just a women , a weaker sex comment. If you are a women or if you are a man who had fathered a girl child in India will know the pain of a girl child who has to face this strange part of the world where she is being controlled every moment.

I can't really tag this post as a social cause tagging "saving or guarding women in India". It is a duty and responsibility of every human being who came down to earth through a woman. When Indiblogger gave me a chance to blog about an social cause, I can only think about how a woman or girl child is treated in a country where actually they should be celebrated . Also whenever these poor souls try to stand up to defend themselves , they are either shamed or knocked down with negative criticism.

A Potential solution for this is the right kind of teaching and approach in the young age itself. Children learn from their parents and surroundings. So, if you treat a women in your family as a weaker member, the girl child will learn to grow weaker and the male child will try to dominate the female child. And please don't nurture the growth of a male child saying that he is a boy/male in a way that he tries to overtake or assault a female kid in a depreciating way .

So, if you just a woman , note that you have the power to mould your generation in a way you wanted it to be. You might have a son or daughter or both and they are what you feed them both physically and mentally .