This day surprised me with a mail from Blogadda which said as a notable newbie, it looked forward to my inspiring post on awesome mens in my life. For a second I thought , maybe Blogadda liked my take on few controversial posts on Neglected parents , Being born as a woman, so on and wanted to read what I think about Mens now. So, I decided to take this chance to Honor the mens in my life through this post.

All through my life , I have personally admired three mens in my life - my Dad , my Brother and my Husband . They were my soldiers, keeping me safe from harmful mens by their stare and protective looks. And with a hash tag soldier for women, I am going to tell you in what simple ways all the three stood up in a way to help support me in growing better. So don't expect any crimes or villains :p .

My Dad - I was afraid of my dad in my childhood days for his strictness and temper. But as I matured, I started to learn more from my dad. He was a great bibliophile and has a separate room surrounded by books for himself. He was the one who introduced me to the habit of reading novels. He stuffed me with books and made me read them regularly. He took to me to book fair often and paid for whatever I took without saying a single word. He had a great expectation from me and often told me to do something differently. In those days, I never understood why he used to say like that but slowly I learnt that my father was a fighter all through his life when he was brought up. I have learnt from him what hard work really is. He stood by me instilling the fire in me to achieve something in my life and I am working towards it.

My Brother - He is such a passionate soul and always come to help me whenever I need one. One experience I had with him changed one of my mind set completely. A few years ago, I was in Mumbai with my husband where fortunately my brother was working too. One day, I was cooking hastily keeping all the spices by my side and infact made the kitchen look messy . My brother who happen to visit my house, was shocked and asked me , " Why did the kitchen look messy ?" . I don't want to talk much, so answered him in a line , "Never mind. It is just a rented house. I will clean later ". But  he said again , " So what, till you live here, it is your house only and you have to maintain it as your own house " . I never expected him to give me this answer . He just sowed the seed in my mind which now grew to a tree of making my house cleaner and better whether rented or not.  I learnt from him to taking up responsibility of things. He stood by me accompanying me at night times and guarding me from staring strangers from school and tuition.

My Husband - He is a great person to be with. He is a perfectionist in observing things and wants everything to be done in order. During my early days of my marriage, he has shocked me of mind reading. Living alone in Mumbai, he goes to work in the morning and comes only in evening. But when he comes, he  makes  me freak out by telling me what I had done exactly in the house that day. Let me tell you one simple incident .We used to have separate shelf in our wardrobe for clothes including drawers. One day, he came home in the evening and asked me whether I took the money from his purse even without opening his purse . I was surprised, saw his face and answered him that I had paid the milk man .Then, I asked him how did he find out even without looking inside his purse for the missing money. His answer surprised me , " The purse had moved a bit from its location ".  He then told me how each and everything he places in his drawer had an order and location. I learnt from him how to be a good perfectionist in observing things around me . He stood and stands by me as a friend and husband . 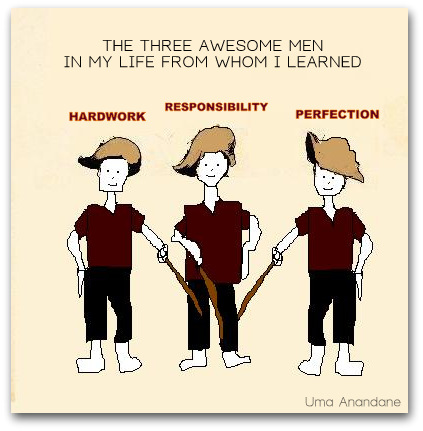 Now, having another new man in my life none other than my son , I wanted to see all the above three personalities in him too . All the above three mens had been living their life with integrity and I inculcate the same in my son. I have been teaching him how important a woman would be in his life as a mother, as a sister , as a wife and as a daughter. I wanted him to grow as a soldier for women and stand by them whenever they need him.

This post is a part of #Soldierforwomen in association with BlogAdda.com