Info Post
Uma Anandane
April 18, 2013
2 comments
Soldier for women! This  is a sound of bravery and sincere motive to help women in need. In my last post, I was had clearly written about the Men my life who deserve to be saluted for what they are to me under the title " Three awesome men in my life". And today given a chance , I come out off my personal circle to pick out Men outside my circle who I have witnessed have come forward to help women in needs. My hunt was on for those soldiers just by recollecting memories of incidents that touched me in one way or the other.

Incident 1:
Dated decades ago : It was a day when I had to travel on a public bus with friends for a special class in my school. It also happened to be the same route for a reputed college as well as a fish market. So, as you can guess the bus was always crowded. Finding a place to sit was really hard at that time and the journey became cumbersome when you have to travel standing under the April's hot weather. If the heat and pain of standing is unbearable for a school girl like me , then imagine the plight of older women esp. those who have travelled a long way for selling the fish in the market. One such woman was standing nearby me along with her fish basket and the journey seems to be worse for her. It was that day, I saw this college boy who stood up and gave her place to sit. It was an act of kindness. Then, every time I had an opportunity to travel by public bus, I used find one in ten men who often  get up willingly to offer their seats to older women and pregnant ladies. I take this opportunity to salute these Men who are ready to give a hand of protection to travelling Women.

Incident 2:
I used to ride in a scooter / bike to and fro to my computer class when I was in college. And one day as I was travelling, I was been hit by another bike on the rode and fell on the ground along with my scooter. Even worse was the bike fell over me. I lay confused and blank with pain unable to move. Though the road was a bit crowded with both men and women, it was only few men who came running towards me to offer me help. Without them, I would be in a worse condition then. They offered me help and words of courage. I take this opportunity to salute these Men who offered me help and those who are still offering help to woman in danger.

Incident 3:
It was a time I had to travel by plane to Chennai from through transit along with my two kids. Unfortunately, we had only minutes left to do all the check in and check out .And before I could finish everything, the women in the counter said that the flight to Chennai already took off and the next flight that was available was only the next day. This news shook me as I was in a city where I had no help, my mobile phone was out of coverage and worse enough the language in the city was alien to me. Imagine the situation with my two little kids there . I was stranded at the Airport. Just then it happened. By God's grace I was not alone. Along with me there were 15 more people who were in the same situation. Together the men went to that particular airline teams stressing them to make arrangement in the next evening fight itself. After few exchange of arguments, finally the airline team agreed to our proposal and asked us to show the ticket copy to issue another new one.

There I go again misplacing my ticket and was left behind. All of them could have gone there way after getting their new ticket issued but the men in the group came forward to help me talking with the senior officials and having me issued my new ticket. The women in the counter who had been all through the happenings came towards me , handled my new ticket and said," “You should be lucky to get  people like these who fought and came forward to help you ” . That day made me realised how it feels to be protected especially from people who you have never met in your life.They were soldiers in disguise. I take this opportunity to thank these people who have helped me in the past and those people who are helping women in one way or the other. 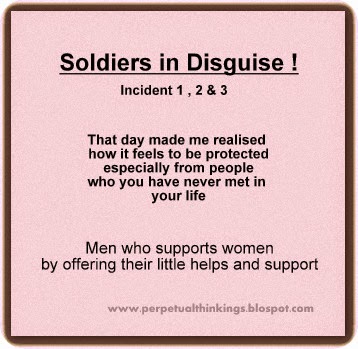 To conclude, I must say that Men who supports women by offering their little helps and support when they need are also a Soldiers. These are the Men who we meet and cross them every day in schools, colleges, shopping complex, roads, markets, etc and whose intention are genuine. I do salute to these soldiers who are in disguise protecting the women in their daily life.