Info Post
Uma Anandane
December 04, 2013
13 comments
A long phone conversation? A boring topic in your classroom? Are you stressed? Bored? To whatever questions you might answer yes, there are high chances that you will start doodling something in a paper laying next to you. I remember doodling straight lines making a pattern and circles within circles. Sometimes, it is a flower and sometimes I drew eyes and faces. But have you ever wondered what those doodles mean? If you happen to ask an expert, his answer will be interpreting the psychology of a person through what he doodled just like he does with a dream. Hmm, what do you think ?

Okay! Coming to the topic, some artist doodled a human figure (and more) which became a source of inspiration for making a creative and a serious toy. Today, I am going to share two such doodle figures called Adam the Doodles Man and his best friend Rover, the Doodles Dog. Priced at £24.95 each, both of these doodle toys were sent by the lovely people at Homearama for to review in my blog. And as most of you know me, I always make sure that I put forth my honest opinion of what I find good or what improvements can be done. Now that you know what I am going to review, let's proceed straight to the point :) 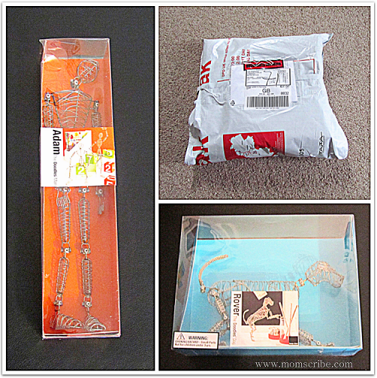 Adam the Doodles Man:
Adam was made up of stainless steel wire that looks like some human doodle drawing which has come to life. He was looking different than any other toys I have seen and I liked that fact of him being unique. Adam is not just a toy, he can move and pose different postures too. His movements are done through those joints that are connected with aluminium rivets. Standing of about 10.2 cm tall, he looked quite bigger than he appeared to be on the company's website. 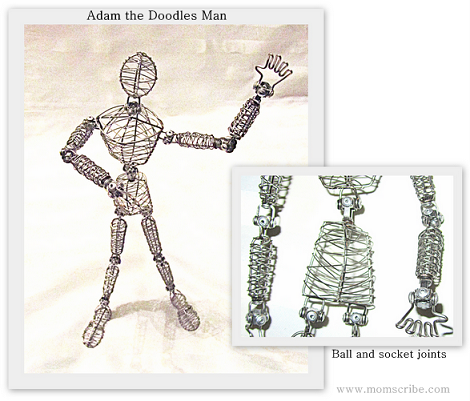 Using Adam was quite a challenge at least until you learn how to use him. I was careful enough not to break him (well, a sense of precaution was running on my mind when I held him for the first few times) and handled him with care learning how each hinge movement responded to. Within a day, I was much more comfortable in using him. I felt comfortable moving Adam's upper part (except the shoulder) which included the arms, hands and his hips since the joints were Ball and socket joints. These joints made it easy for striking different postures with Adam.

On his lower part especially on the thigh and on his knees, the movement is only to and fro (forget the rotations) since Adam was replicating the movement of a real Human with his hinge joints. Making him stand erect for poses was my only concern although he had a big foot. With Adam, I was having a fun making him to pose in different positions as if someone is really doing it. 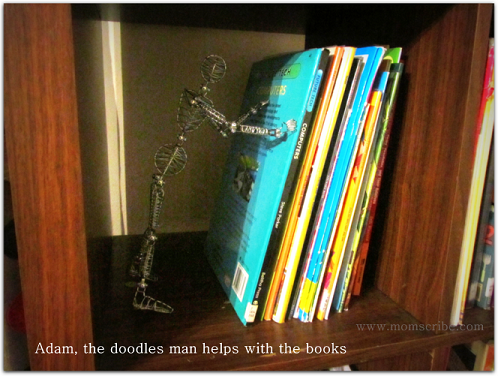 This is what Adam has to say, "I never rust, never rest, never eat, and never sleep. I will dance, I will climb, I will sit quietly and listen with a sympathetic ear. I will hold work items or reminder notes. I stand on my own two feet or sit comfortably on a shelf, a table edge, a stack of books or papers. I can gesture with my arms. I will be your best pal – always there when you need me. I’m looking forward to being your friend."

Rover the Doodles Dog:
Rover looks are so good and his physique reminds me of a German Short-haired Pointer. Rover just like Adam is made of stainless steel wire that is connected at the joints with aluminium rivets. But his joints are hinge joints except at the neck (with Ball and socket joints) which allows movement similar to the knees permitting motion only in one plane. This is actually very easy to bend him and pull him up back to position without any hesitation esp. there is no need of being scared to break the piece up. 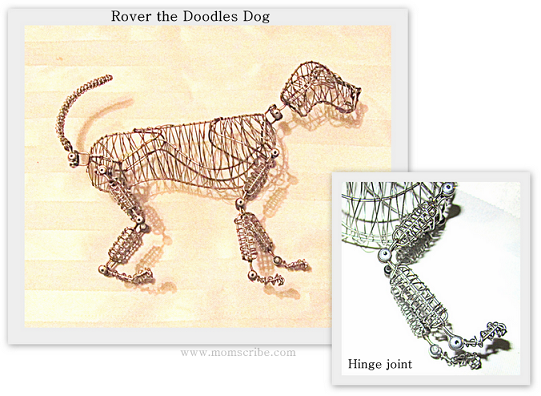 The doodles can also add an interesting touch to your book-rack or your toy self. I, in fact loved changing their looks often on my top self wherein by just looking at them making different postures makes me feel good with their lively presence. 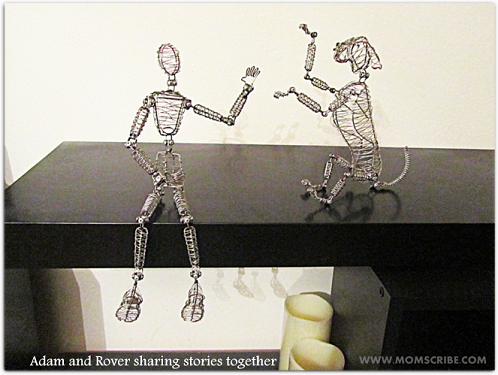 Adam The Doodles Man which was started as a cool bendable wire man can also act as a " Stick Figure" for your basic drawing skills. Along with Rover the doodles dog, you can also make some wonderful doodle sketches as a beginner. The below image has the shadow of both Adam and Rover cast on the wall which gives an idea of how your sketch might be (just in case you chose to draw them *smiles).

To add more, I went ahead to make a small video with them (basically I'm interested in adding such creative touch). The result of the video was convincing to me and I hope those who are see this video will also feel the same.

Advantages:
Disadvantages:
Overall, it was fun having Adam and Rover in my home. Yeah, Adam is still sitting beside me staring at me as I type this post. To anyone who is interested in toy collections or collecting some unique pieces or those who looks for some lively fun at home and for those who like making some basic sketches, Adam and Rover comes as a perfect companion.

Disclosure : I received the above product for the purpose of writing a honest review . All opinions are my own.