Info Post
Uma Anandane
December 07, 2013
6 comments
Mumsnet and Twentieth Century Fox Home Entertainment has kindly sent me a DVD of  the Dreamworks Animation's THE CROODS for to watch and review the same marking their release on DVD and Blu-ray on the coming of 9th December, 2013. Written and directed by Chris Sanders and Kirk DeMicco, it also features the voices of features the voices of Nicholas Cage, Emma Stone, Ryan Reynolds and Catherine Keener. The DVD also included 'Croods' cuts scenes' and 'Belt's Cave Journal' which was like a story with chalk drawings. 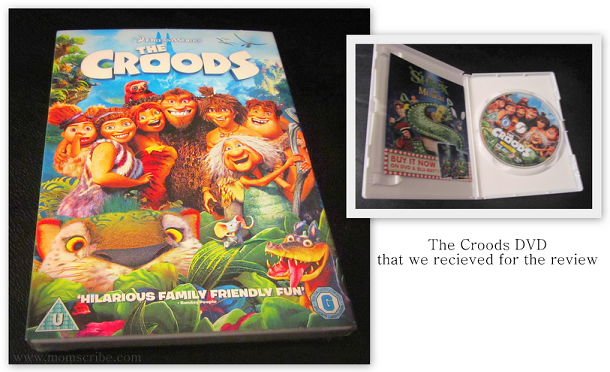 It was on the Friday night that we as a family watched the Croods movie together. It was one of the best animated movie that we watched after a long time. The Croods as I watched and understood from it is summarised as below.

The Croods are the last survivors in their times belonging to the pre-historic period. The story is about how the Croods survived the final threat to their family, the end of the world scenario and in fact learnt to know what is the actual meaning of living life. The story has everything that runs in a common family – affection, protectiveness, discipline, anger, love, jealousy, forgiveness and understanding. Each character in the story has a distinctive personality that reminds us the values of a family. The virtue that runs all along the story is that to break one’s shell of darkness which suppresses growth and follow the dreams of tomorrow in hopes of finding something better and brighter. To look forward to a better tomorrow for lost souls is highlighted deeply in this movie.

My favorite character in the movie was Grug, portrayed as an overprotective father in his family. He fears threat to his family from the outside world with new things after what had happened to his neighbours. He is accustomed to live inside his cave with his family almost all day except for hunting food. He has set boundaries for his family with a set of rules to follow which is detested by his teenage daughter Eep. Also, just like any dad a hint of jealously strikes Greg when he comes to know a new Guy entering between him and his daughter Eep. Grug even tries to override Guy of his smartness acting clever in order to get his daughter back. But at one point, he gives in as for Guy was the only hope to save his family. There is this scene where both Grug and Guy converses when they get stuck in the quicksand which looks like a dark thick liquid.

Guy says to Grug," Your daughter is just like you. She loves you but always forget to say it just like you forget to tell her".
Grug was taken back and answers, "I guess I was just busy keeping them all alive".
Guy then says, "That's okay! that's what all dads do"

For Greg, his asset is his strength. For him, his world is nothing but his family.

Eep is Grug’s darling and curious daughter. She was the funniest character caught between the old and the new world. Unlike her father, Eep wanted to see the world outside other than her cave. Her curiosity in fact transformed her whole family into someone they could not image they would be. Like any other teenage girl, Eep hated restrictions. She even tells her father ,“ That wasn't living. That was just not dying” denoting their life on the cave forever. Although she loves her father, she often turns deaf ear to him and does what she feel is right.

Another character in the story is Guy, a thin nomad who belongs to the other side of the world and he believes in using his intelligence. Contrary to Grug, Guy is full of ideas but lacks physical strength. He has a special mission in his life, a mission to follow the light. And in his journey, he stumbles upon the Croods who later joins him in his journey to the brighter world. Other characters include Ugga, Grug’s lovely wife and Eep’s mom who helps her family and handles their communications well especially between when an argument arises between Grug and Eep. Her mother Gran is an old woman with a walking stick who was often seen as a burden to Grug but the lines of Grug’s comment on his mom-in law always tries to end with a light note. Thunk, son of both Grug and Ugga is a fat and a timid fellow who believes his father every word and tries not to use his brain (he even says that he has no brain at all ). The smallest in the family is an Eep’s little sister Sandy, who is a ferocious toddler. She is portrayed like a puppy running behind small creatures and always on the move. She gets friendly with Belt, Guy’s pet who is a funny little creature who often grabs your attention with his “Dun Dun Dun” which is loved by my kids and makes them to imitate with him.

Some key features and favourite moments we noted in the movie were:
The movie was hilarious and the story line was quite good. It had everything to entertain the family in the coming holiday. The fantasy creatures were too interesting and new to the children. Ideas like shoes made with star fish, fish, etc. and role-playing act to attract an animal’s attention are too funny to watch. The animation was at its best and the whole movie was filled with stunning colors. My children and I were laughing hard at many scenes in the movie. There were also family values spread in the movie and the whole picture ends with a moral. Overall, it is one of the best children movies. The Croods will be out on Monday December 9th on DVD/Blu-ray movie and will be a best Christmas gift for your Children. I can assure you that they would love this movie and have a fun time watching it as my kids did :) 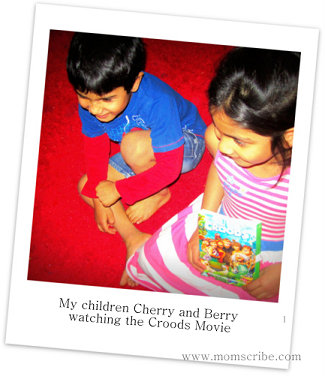 Disclosure : I received the above DVD for the purpose of writing a honest review . All opinions are my own.