Info Post
Uma Anandane
December 19, 2013
8 comments
I always use Windows Live Movie Maker for most of my movie editing since it has almost all functions that is needed to edit basic video for my blog. One thing that Windows Live Movie Editor lacks is that it has very less converting formats including for devices like iPad or iPhone. For converting more video formats for various devices available on the market, one needs to download another software which converts one format to another.

I was introduced to Wondershare Video Converter Ultimate whose features I am going to blog about today. What makes it worth downloading and using is that it has full conversion features along with basic video editing which is as simple as a pie with its new update.

There are no hard and fast rules for editing or converting your videos. Wondershare Video Converter Ultimate has all in one feature with drag and drop video converter, DVD converter and burner, YouTube downloader along with basic video editing features that includes an option to add subtitles.

Before going into details, here is an update about the Three Full Days Giveaway Campaign for the Wondershare Video Converter Pro for Windows between the 22nd and 24th of January 2014 after the recent Christmas Giveaway.

The video you have created or downloaded can be converted into different formats using two ways
I tried using both ways and each gave me a perfect result within minutes.

Effects Feature: Out of the five available features, I started from the effect feature as I preferred that way. There are 18 effects which includes effects such as

Watermark Feature: Wondershare Video Converter Ultimate has some basic editing powers to personalize your video like cutting, merging, trimming, rotating and even adding watermarks. You can add Image Water mark by uploading your picture as well as use a text watermark. You have an option to edit your text's fonts, size and color including its transparency.

Trim Feature: The multi-trim function offered by Wondershare is really great to shape up your video the way you want it to be. You can remove unwanted parts anywhere between the video using the Start Time - End Time trimming function and that can be done more than once. You can reset it back in case you if you have changed your mind.

Other feature like Adjust is used to rotate (clockwise and anticlockwise), flip and crop the video to the desired size. The last feature named as Subtitle is used to add subtitle to the videos either by adding your own files or by searching the subtitle on opensubtitles webpage.

With edited videos, you can also add more video and merge them together in the main interface of the software by ticking the box "Merge all videos into one file". The final converted video is saved in the output folder specified below on the footer of the software.


Converting 2D to 3D movies
The ability of the software to create 3D movies, the latest technological revolution which makes a picture enhance more in depth perception giving it a realistic visual entertainment is striking. With 3D media player supporting the playback of 3D MP4 video files, I can create my own 3D MP4 video files with my favoutite 2D Movies. As an example, I tried converting Toy Story 2D Trailer into 3D (see below image) and watched it using a special projection eyewears (I got one free while watching 3D Sleeping Beauty in Xscape cinema). Yes, converting a 2D to a 3D movie was extremely simple and easy using Wondershare Video Converter Ultimate. 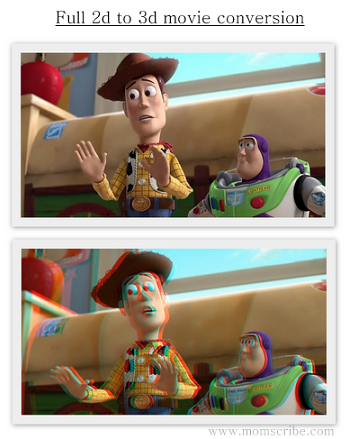 Burn DVDs
Burning your DVD is very much easy using Wondershare Video Converter Ultimate. After editing, you can burn the movie files into your home DVD using your own personalization. There are some 10 DVD templates available to use and you can also add some background music to your templates. This software provides a complete video conversation along with burning multiple files simultaneously in batch.

If your DVD is copy protected, you are directed to a web page that provides free plugin to remove DRM and dvd copy protection on Windows or Mac

Troubleshooting Facility
With Wondershare Video Converter Ultimate, you have always help at hand. It covers almost all topics on fixing errors including an Online support.

The Wondershare Video Converter Ultimate offers Optimized software interface that improves user experience. With loads of features available in the software at a price as reasonable as $39.99, this easy-to-use video editor is a must have for an excellent and fast video conversion. You can download this Wondershare Video Converter Ultimate Software using the above link.