A Toilet to End Open Defecation

Info Post
Uma Anandane
November 17, 2014
4 comments
Travelling to remote areas one might come cross a different way of life than what one had seen in the city. I had been to my great grandma village when I was little for about one or two times only and I do remember the way of life lead by them which was far completely different and cannot be compared to the life in the city.

Having a bath in the open lake where fishes swim between the feet and then having the same fish for the lunch the next day is what people normally would do there. The morning hours especially at the dawn, walking deep into the woods where pricky thorns hurt your feet is where a group of women and children will walk for defecation. Because of this, one cannot stay there for even two continuous days even though the lovely nature, colourful birds, unpolluted air and green vegetation are inviting. A deep guilt will start to surround you after a trip from the woods. And thankfully no men were allowed into that particular area which is reserved only for ladies and children. If one single day would hurt your feelings and pride, imagine the situation of many young women and children who is undergoing the same routine life every day for various reasons. 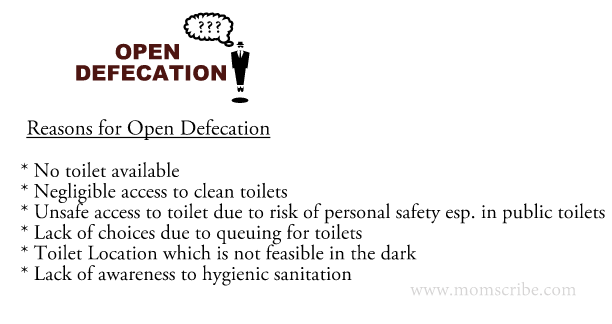 Although the state of that village might have improved a lot by now, there are many more remote places far from the city which haven't improved much due to less exposure and help in India as seen in the report collected by World Health Organization and United Nations Children’s Education Fund (UNICEF) . It has been estimated that there are more than 620 million people practicing open defecation due to lack of access to proper sanitation. The major reasons for open defecation are due to lack of awareness to hygienic sanitation and negligible access to clean toilets leading to the sorry state of affair of these people.

The children aged below five easily get affected by infection due to improper sanitation leading to diarrhea which sometimes becomes fatal. On the other hand, young girls who have attained puberty and women suffer a silent fear and an insult in the open field. There is no room for privacy. The basic human right of woman for safeguarding her privacy and protecting her has been neglected due to this open defecation. One can imagine the kind of lifestyle these women and children live in a world which has improved ten folds sending spacecraft to Mars and building real life like Robots. 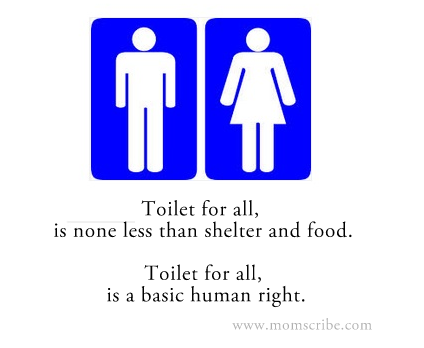 To provide a long term solution to this open defecation problem, Domex a leading toilet cleaner brand of Hindustan Unilever Limited had launched the Domex Toilet Academy (DTA) programme on 19th November 2013. The DTA programme aims to create a positive impact on the health and well-being of the community by creating a network of local entrepreneurs to sell and build the toilets and also help educate people on the importance of hygienic sanitation by stimulating the local economy. For doing so, they are driving an initiative called #ToiletForBabli which aims to build 24000 toilets by 2015 in rural areas faced with the problem of open defecation as well as promote the benefits of clean toilets and good hygiene.

To take the step further, they are seeking people to join in their latest initiative to help make villages ‘open-defecation’ free.

You can bring about the change in the lives of millions of kids, thereby showing your support for the Domex Initiative. All you need to do is “click” on the “Contribute Tab” on www.domex.in and Domex will contribute Rs.5 on your behalf to eradicate open defecation, thereby helping kids like Babli live a dignified life.

Yes, I have done clicking on the contribute tab. Will you? Do it now if one click of yours will be changing a life for good somewhere in the corner of the world.