Info Post
Uma Anandane
November 29, 2014
5 comments
Pumpkin carving is a best part of Halloween. A pumpkin carved into a jack-o-lantern is the most famous symbol of Halloween. Following it, came different patterns and ideas for pumpkin carving making it fun and interesting activity during Halloween. The pumpkin we had carved for Halloween a month ago finally finds its way into my blog. It was a Maleficent Pumpkin.

My kids love Disney characters and hence I decided to do a craving based on these characters. For Halloween, we decided to carve a villainous character "Maleficent" for our pumpkin. The tools I used for my carving was a simple pen knife. And you can see the final result in the below image.

Do you like to know how I did this craving? The following steps and images will guide you to make one for yourself for the next Halloween.

Step 1: Creating the Template
The very first step is to buy a craving pumpkin followed by creating a template for our pumpkin. I brought a carving pumpkin from my usual shopping place and for the template, I drew an outline of Maleficent character using an image from my laptop. For that, I first confirmed the size I need to draw by placing a white paper over the pumpkin and roughly drew a circle with the help of my kids. This circle is where I will be drawing the outline of our character. 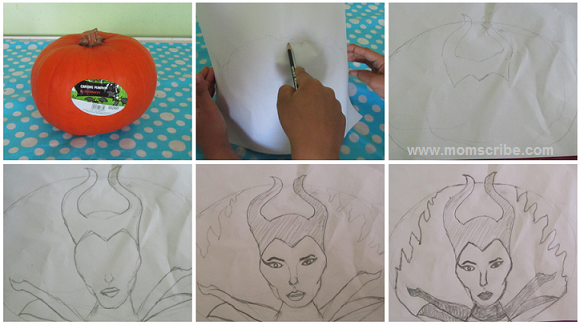 By noticing each images, you can follow on how I arrived at my final image of the maleficent character.

Step 2: Cleaning the Pumpkin
After our template is ready, it is time to clean up the pumpkin inside out. First, you will need to cut the top part in a random circle. Remove the top part which reveals a hole with seeds inside. 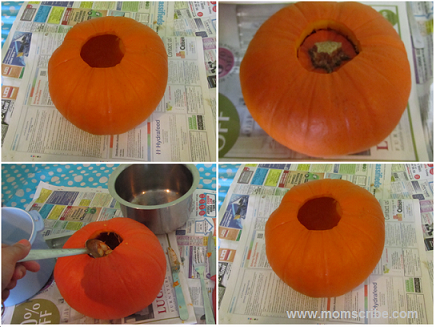 Now clean it. It is easy to clean the pumpkin and I used an ice-cream scoop to remove the seeds and other stuffs from inside the pumpkin. Then, I cleaned the whole pumpkin in a running water and dried it with a clean cloth.

Step 3: Craving the Pumpkin
After creating our template, it is now time to crave the same on our pumpkin. For this, I pasted my drawing over the pumpkin with the help of the cello tape. Then, using a sharp pen knife I started to cut through the outline slowly and firmly. 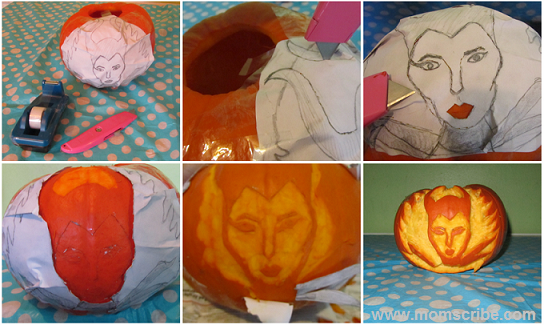 As I was doing so, I found how hard is craving pumpkin was. Maybe the professionals used a special craving tool to crave these pumpkin. But, I managed to cut using my pen knife and which I found it much easier compared to my other knifes. The pen knife gave me control on what needed to be removed from the pumpkin skin. Even so, I cut of one bit of the malefiecient collar. Craving the pumpkin is definitely a difficult job but the end result gave me a satisfaction and that made my whole work rewarded. My kids were very excited to see the Disney character carved on the pumpkin and in just minutes, we were rushed out to see how it lights up in the dark. 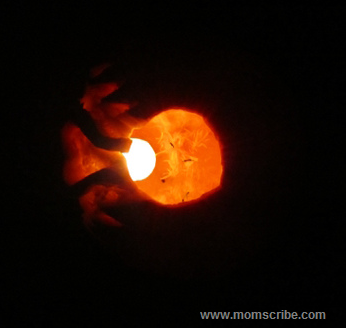 I placed a tea light inside the hole and lighted the candle. You can see it clearly from the above image.