Info Post
Uma Anandane
August 26, 2013
15 comments
Potato crisps has become one of the favorite snack both among children and adults. I always make sure I give my kids home made foods. With oils, sugar and salts altering the lifestyle of people, it is always better to be home-bound when coming to foods. But there are cases when we have to buy snacks from outside for many occasions and reasons. In that occasions, like most parents I tend to prefer certain brands that I think would be an healthier option apart from home made snacks especially when buying from outside stores.

Walkers is one brand that I always prefer since I believe that they make potato crisps with less oil and less salt which I can give to my family as a part of a treat. Recently, they made sure improving their crisps by introducing 30% less fat in Walkers Mighty Lights which can be perfect for kids' lunchboxes. Key points I loved in Walkers Mighty Lights are
With all the three benefits above, it is still important need to consider its fat, sugar and salt content. 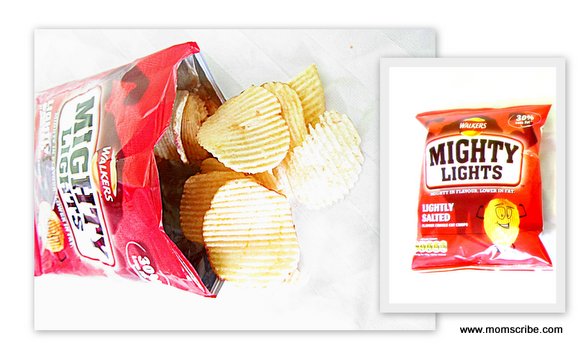 
Lightly Salted
I opened the packet and there were no smell of salt or oil at all and at the look of the crisps, they looked clear and crispy. Popping a crisp in my mouth, I tasted very less salt compared to the usual original Walkers. The ridged look seems to be appealing and the potato crisps were just right, not too thin or too thick. The "no oily" look and feel of it made it a better snack to indulge in the evenings . The healthy improvements I personally think worth to notice in this pack are "Oil free hands", "less salt" and "less fat". My daughter preferred this taste and liked to have it compared to the other flavours. 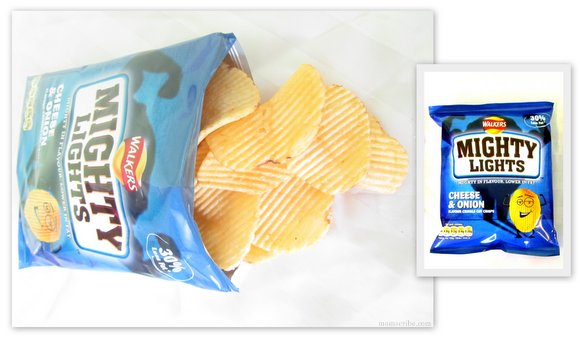 Look-wise, the crisps looks creamy and I found very less browns on the chips which means that the chips were evenly cooked. Again, the smell that arose from the pack while opening it was very less and while tasting a crisp, I felt they were creamy with the usual taste of Walkers cheese & onion except that the salt seemed to be very less. Dried Onion and Powered Cheese was the part of the ingredient which made up the taste making it my preferred flavour. The crinkle cut on the crisps made it quite crunchy and appealing. Most importantly I liked when my fingers were free from oil as compared to other normal crisps do. 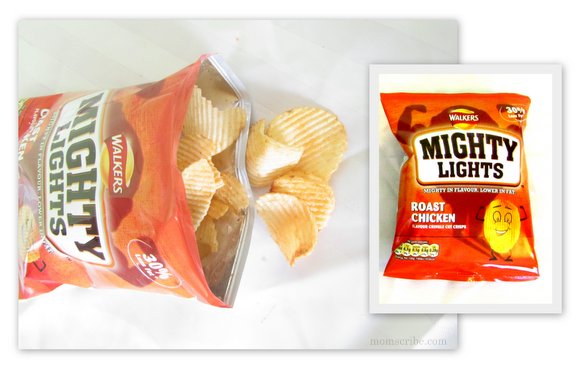 This is another interesting flavour of the Walker series. Opening the packet, I was not offended by any smells especially I did not smell chicken. It smelled somewhat like a barbecue and rusty smell. The crispness are just like the other two above, quite crispy and without oil on hands. These crisps became my son's favorite and he had already had two packets in a single day.

But one thing I did not understand is that the pack was labelled "suitable for vegetarians" and with the name "chicken roast", I was confused. The ingredients as I read contains dried onions and roast chicken seasoning, a flavour. And as I researched out of interest, I found that some sources have pointed out that from a specific date the orange pack of Roast chicken is said not be suitable for vegetarians. For me, vegetarian or non-vegetarian does not matter because I do eat meat and I love chicken. As for the taste, I could not ignore a best tasting crisp like Walkers. And no other crisps are as good as them.

Snacks has become a part of our lives in today's era. And it is important to make sure how much we consume at the end of the day when eating crisps from outside. Walkers Mighty Lights is one option to consider for potato crisps owing to its brand name and decades of presence in this industry. With Walkers potato crisps coming out with more healthier options with less salt, less fat and no MSG through New Mighty Lights is a welcomed one.

Disclosure : I received the above product for the purpose of a honest written review. All opinions are my own, written ONLY after trying and testing the above product. No false information is provided to the best of my knowledge.